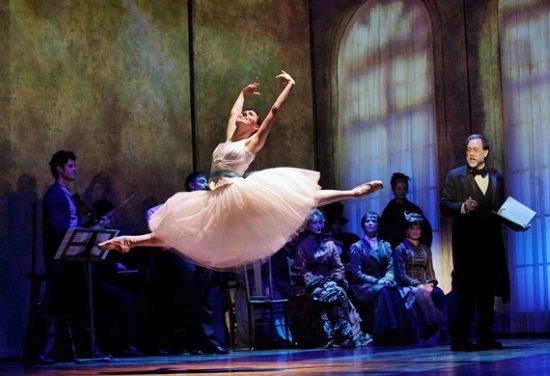 The world premiere musical Little Dancer, now playing at Kennedy Center’s Eisenhower Theatre, takes us back to a time when musicals depended upon good storytelling and a strong score. Let’s face it; technology in theatre has given writers an excuse to get lazy because they know the physical elements will cover what’s wrong with the material.

With a score by the Tony Award winning team of Stephen Flaherty (music) and Lynn Ahrens (lyrics) and direction and choreography by another Tony winner Susan Stroman, Little Dancer soars big time in every way.

Lynn Ahrens also wrote the book and while it is a simple story it comes across very theatrically. It basically is about following your passion and doing what you need to do to in order to survive while you are making your dreams happen.

…’Little Dancer’ soars big time in every way…bar none the best musical I have seen all year.

As you might know the story is inspired by a famous sculpture called Little Dancer by artist Edgar Degas. Here we get an idea of what might have gone into the creation of this famous piece of art. Marie van Goetham (Rebecca Luker) was the model for Degas and after his death she returns to his studio where she had posed for him prior. When she arrives she finds the items in the place being cataloged by the Museum Cataloguer (Jenny Powers). Thus begins the story of Marie in flashback form. Young Marie (Tiler Peck) hasn’t had it easy. Her mom (Karen Ziemba) runs a laundry to make money and is an alcoholic. She tends to steal money out of Marie’s salary from the Paris Opera Ballet where Marie is part of the company.

Marie’s sister Charlotte (Sophia Anne Caruso) has the same dream of becoming a dancer like her big sister. In order to “help” get money Marie has an uncanny knack for pick-pocketing. One day she picked the wrong pocket. She lifted money from Edgar Degas (Boyd Gaines) to be able to afford a good pair of ballet slippers. In order to repay the debt, Degas insists that Marie model for him. Meanwhile choreographer Philippe de Marchal (Seán Martin Hingston) is looking for a featured dancer for a new ballet. After auditioning the other girls he chooses Marie. The night before, Marie was hit by her mom and her eye was badly bruised. Marchal was casting for a street urchin character and thought Marie looked the part. (Guess the black eye helped matters.) Marie has been warned by the company that if she continues to pose for Degas she will be dismissed. She does not heed the warning and eventually after the statue is put on display and is being called some pretty bad things, Marie is dismissed.

I don’t get excited over a whole lot that I see nowadays but this show is a big exception. Starting with the beautiful score by Ahrens and Flaherty, we start with a haunting dance theme for Marie that is heard throughout. Then our big opening number called “C’est de Ballet” gets us rolling. From there we have a lovely sister song called “Little Hole in the Wall” which refers to a hiding place for Marie’s money from her mom. A little further in act one there is a great number for Christian (Kyle Harris) who is the ballet company’s violinist called “Musicians and Dancers and Fools.” But perhaps one of the strongest songs in act one is called “In Between” which is performed by Degas. It’s like an eleven o’clock song but much earlier in the evening.

Act two musical highlights include another song for Christian called “Dancing Still” and Rebecca Luker as the adult Marie has a star turn with “What You Made of Me” which illustrates what happened to Marie after the statue was initially unveiled.

The score is orchestrated by Doug Besterman and Larry Hochman and played by a nineteen piece orchestra under the direction of Sean Gough. Yes, you read that right. There are nineteen players in the orchestra for a new musical with eight of those being strings. As always with the work of Besterman and Hochman, the charts sound even bigger than the number of players in the pit and prove again why these two guys are very much sought after in the business.

A shout out goes to Concertmaster Doug Dube for being the musical voice of Christian’s violin solos.

Director/Choreographer Susan Stroman is in her glory with an extended ballet sequence in act two that takes us back to what Agnes DeMille did with the “Dream Ballet” in Oklahoma. In this case Stroman uses ballet to recap the events of the evening.

Stroman also gets some pretty incredible performances out of her company. As Young Marie, Tiler Peck, who is a principal dancer with New York City Ballet, is a triple threat. She can obviously dance but she shows herself as a good little actress and her singing is quite good as well.

Peck has a good scene partner in the person of Boyd Gaines as Edgar Degas. Together Gaines and Peck create a chemistry that I don’t see a lot of anymore. The two are so in sync with one another so you totally buy the relationship that is being built between artist and subject. There is even a little duet for the two called “A Box of Things” for good measure. This song illustrates how Degas liked using real objects for his work.

Other standouts include Kyle Harris as Christian who establishes himself as a good big brother type of character to Marie and Jenny Powers and big sister Antoinette van Goethem hits high with “At the Dressing Table.”

Karen Ziemba as Mother Martine is wonderful as always and here she has a neat feature called “Laundry” about life at her job.

Many veteran designers help create the world of Little Dancer. Beowulf Boritt’s sets have a Degas touch throughout using a lot of color while William Ivey Long’s costumes are in perfect period. Ken Billington’s lighting is totally on pointe. It is subtle enough to enhance as opposed to bury the story. Kai Harada’s sound design is not over amped. That is always a pleasure. Benjamin Pearcy’s projections don’t overpower and have a Degas feel to them.

Little Dancer is bar none the best musical I have seen all year. With a strong score and superb orchestrations, great cast, attractive physical elements and all under the helm of Susan Stroman, Little Dancer is one show that deserves a future somewhere beyond Kennedy Center.

Running Time: Two Hours and 35 minutes with one intermission.

Little Dancer runs through November 30th 2014 in the Eisenhower Theatre at The John F. Kennedy Center for the Performing Arts which is located at 2700 F St NW, Washington, DC 20566. For tickets, click here.