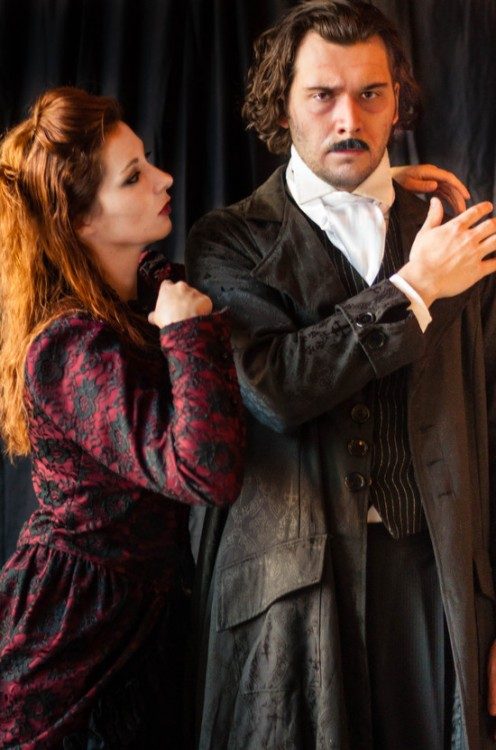 Elliot Kashner and Jen Bevan as Poe and the bygone Lenore. Photo courtesy of the production.

For the first time since Molotov Theatre Group scared my pants off last spring with Normal, the brutal tale of the Dusseldorf Ripper, I parked in a creaky old red leather seat in the back room at DC Arts Center Sunday night, ripe to have my pants scared off again.

To kick off its seventh season–the “season of the supernatural,” as they put it–Molotov has chosen Nightfall with Edgar Allan Poe. Directed by Mark Kamie, this adaptation of four of Poe’s most famous works is a dreamlike horror fantasy with the aforementioned author (Elliot Kashner) at the center, stumbling in and out of madness like an unhinged rag doll.

…a morbid, fog-ridden roller coaster of doom and horror with rich costumes, dedicated performances, and an entrancing ambiance that will draw out even the most stoic among us.

The play races first through a dynamic group performance of “The Raven,” perhaps Poe’s most famous work, like a choreographed poetry recitation. It is our first glimpse at Jen Bevan’s macabre costuming–darkly Victorian, with terrifying masks for the Raven (Yoni Gray) and the three spirits who torment the young, stuporous Poe in the opening scene. Following “The Raven,” the script takes on “The House of Usher,” “The Pit and the Pendulum,” and then spins into a crescendo of hysteria with “The Tell-Tale Heart,” in which Poe, as both author and protagonist, dances the old man (Jen Bevan) to his death, and then spirals rapidly into guilt-ridden madness.

Molotov Theatre Group prides itself on reviving the naturalistic horror plays made famous by Le Theatre du Grand-Guignol–a Parisian theatre said to have judged itself based on how many audience members fainted from shock during the course of an evening. The Grand-Guignol—literally “the Big Puppet”—had its heyday between the World Wars, and was housed in a former chapel in the Pigalle neighborhood; eerie Gothic sculptures looked down on the audience; special boxes originally used by nuns attending church services were rented to patrons who grew boisterous and sexually aroused by the violence and gore happening on the stage.

Molotov’s current home at DC Arts Center is aesthetically different, but a worthy venue just the same. On the second floor of an Adams Morgan storefront, the venue is a small, dark space, with tired-looking antique seats repurposed from other theatres. The creepy, even campy, ambiance of the space reinforces the impossibly dark flavor of Kamie’s directing and Bevan’s choreography. Brian McDermott’s simple but versatile set skillfully mimics the sparseness of a dark prison cell and the emptiness of a large ancestral home in ruins, while the ghostly soundtrack curated by Sound Designer/Composer Gregg Martin gives the play an unnatural, old-radio-recording kind of feel.

As I’ve come to expect from Molotov, Nightfall’s cast of six were impeccably exact as Poe’s characters and narrators, obviously taking great care and pleasure in the theatrical flourishes of madness. “The Fall of the House of Usher” included a particularly well-crafted scene: Poe (Kashner) watches the babbling Roderick Usher (Adam R. Adkins) and his companion Edgar (Matthew Marcus) from his desk, feverishly penning the story while reacting with confusion, horror, and passion. In another interesting twist, the old man (Jen Bevan) who falls victim to the protagonist’s violent obsession in “The Tell-Tale Heart,” is played by a woman. Gender-bending the cast like this, along with the waltz that Kamie uses to detail the week before his murder, lent the story an air of sexual violence that haunted me for hours afterward.

With the tiniest hint of comic relief provided by Adkins and Marcus, Nightfall with Edgar Allan Poe is mostly a morbid, fog-ridden roller coaster of doom and horror with rich costumes, dedicated performances, and an entrancing ambiance that will draw out even the most stoic among us–Poe fans or otherwise. It begs the question: Is Poe insane? He insists the opposite, but we must wonder–where else could these bloodcurdling stories come from but the brain of a tormented madman?

Nightfall with Edgar Allan Poe runs through December 7, 2014 at DC Arts Center at 2438 18th St NW Washington, D.C. You can purchase tickets here, or at the door.