Theatre Review: ‘The Gift of Nothing’ at Kennedy Center 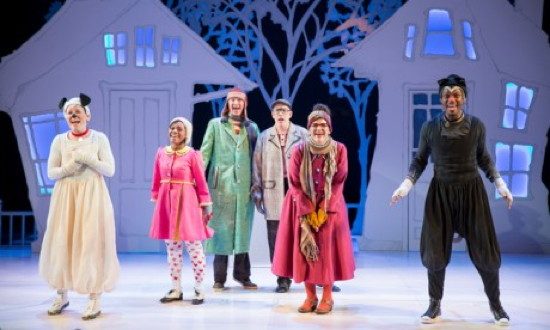 The Cast of ‘The Gift of Nothing.’ Photo by Scott Suchman.

One of the best thing I did at my last newspaper was convincing them to run “Mutts,” the splendid comic strip by Patrick McDonnell. A simple strip about dogs and cats and the people who loved them, it was drawn in the old school manner of George Herriman’s Krazy Cat, while the adults reflected the excitable figures of the E.C. Segar’s Popeye or Rudolph Dirk’s  Katzenjammer Kids.

The content, meanwhile was gentle, simple, wise and full of heart.

“Mutts” has since grown to 700 newspapers, in 10 languages and has been collected in dozens of books. It never made it to the big screen (though there was talk) but has now joined the pantheon of comic strips turned to stage plays, the most successful of which was You’re a Good Man, Charlie Brown.

…the rare family production that succeeds to equally delight children and adults.

The world premiere of the perfectly crafted new musical The Gift of Nothing at the Kennedy Center brings the “Mutts” gang into the forefront of the genre.

On an elegant monochromatic set by Luciana Stecconi that conforms to the cartoony lines of McDonnell’s strip, the story of friendship between Mooch the Cat and Earl the dog is the rare family production that succeeds to equally delight children and adults.

This comes despite an adaptation that couldn’t have been easy.

In the strip, the animals may be front and center, but they are certainly smaller proportioned than their cartoony adult owners. Right away on stage we see that actors playing the dog and cat are as big or bigger than their people.

How to approximate the “Mutts” designed into differently engineered people? Costume designer Laree Lentz does a great job in this, with expressive ears, pointy tails and in the case of Earl, big baggy pants that accentuate the playfulness and hind quarters of the pooch; for Mooch, the look is more lean. But in both, they are animated primarily by their actors.

A languishing but curious Nickolas Vaughan as the cat with a “shlight” speech impediment who can alternately do cartwheels or utterly ignore at least one of his owners.

Maggie Donnelly is even better as Earl, all excitement and big eyes, who communicates to humans by saying “Yap!” or saying their day was “ruff!”

Translating the beloved humans of the strip seem like an even more difficult task, but the costumes and hair dressing begin a process that again the actors fully embody.

Rachel Zampelli is a standout as Millie with the oversized bun in her hair and penchant for purring cats, whose love in her house is undoubtedly her Mooch. In this, it’s a little disappointing that Frank doesn’t have the same big brushy mustache he has in the strip, but balding Michael John Casey, who somehow emerges from being the drum set to take the role a bit of the way into the play, is fine.

Joseph Patrick O’Malley blends optimism, comic tone and colorful togs in his depiction of Ozzie, the dog-loving owner of Earl (though, alas, he is also minus the brushy mustache of the comics — come on people, it’s Mo-Vember!).

Sakile Lyles looks least like her comic book counterpart – a little girl in love with her cell phone named Doozy. In her bright pink togs, she’s cute and sassy, good timing and has a ringing singing voice. She’s also the only actual child in a children’s play (though she’s actually a recent Howard grad). So she’s good to have around though not essential to the very simple tale.

On a wintery day only described as “a special day,” stacks of presents are piled on the stages’ ends and Mooch is inspired to get Earl a present too. But what? After all, the pooch has a dish, a dog bed and a squeaky toy. What more is there?

So there’s a long process of deciding that giving nothing — all wrapped in a box — is just the thing to give. It’s provides quite a lot of material for extended wordplay, with which lyricist Andy Mitton has a good time in the songs.

There’s nothing monumental in the music you’ll hum on your way home, but Mitton has a good way around a rhyme and a melody (left largely to music director George Fulginiti-Shakar, wearing his own eccentric costume, at piano).

The simpler proves to be the better — the most direct hit for kids might be the kitty-mesmerizing “Little Pink Sock,” whose total lyrics are just that.

The surprise of The Gift of Nothing to local audiences is that it is directed and was adapted with McDonnell and Erin Weaver by Aaron Posner, known in these parts for making The Seagull into Stupid #$%ing Bird for Woolly Mammoth, and will open his rewrite of Uncle Vanya, retitled Life Sucks (or the Present Ridiculous) next month at Theatre J.

No such title vulgarity here — or anywhere near the light, bright, warm and smart The Gift of Nothing. Posner just knows how to turn out sharp dialog and create scenes with impact.

Is there more of an underlying message? Perhaps only that in a world where dogs and cats get along despite all odds, so can men and women (since Mooch and Earl are played by one of each) and so can black and white (ditto).

And there’s religious tolerance too, since The Gift of Nothing is the least religious of any seasonal offerings, built as it is around a wholly unspecified, wintery “Very Special Day” that can be relatable to any faith, or lack of one.

Children’s theater isn’t always easy — once you get the kids involved by opening the floor for questions  (“What’s your dog’s name?”), it’s tough to ever quiet them down again. But this “Mutts” musical is so captivated nobody of any ages ever gets antsy.

Running Time: One hour, no intermission.

Advisory: Well suited for everyone from the youngest children to the oldest grumps as well.