Theatre Review: ‘The Intelligent Homosexual’s Guide to Capitalism and Socialism with a Key to the Scriptures’ at Theater J 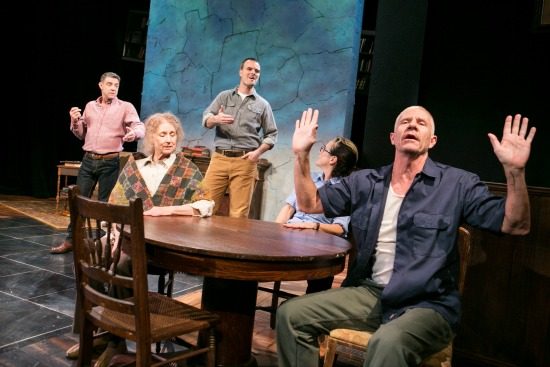 When the Theater J production of Tony Kushner’s The Intelligent Homosexual’s Guide to Capitalism and Socialism with a Key to the Scriptures still hadn’t begun a little after its posted starting time one night this week, I had a dark thought: Kushner’s backstage rewriting it again!

That was practically the situation when the mammoth work — his most recent for the stage — first premiered at the Guthrie Theatre in Minneapolis in 2011. Kushner is a brainy, passionate and very funny writer whose “Angels in America” had earned him a Pulitzer and a reputation. And here he seemed to be throwing every last idea he had into a 3 1/2 hour production.

Kushner was in D.C. for rehearsals of its D.C. premiere — and only its fourth staging overall. But by now the work, while still unpublished, has attained a heft and solidity of a major theatrical event. Those worried about its length (or troublesome course up to now) should know that it needs the time for all of the humor, pain, unexpected pathos, and history of the demise of the American labor movement he wants to include.

...full of theatrical mastery — of characters, of tension, of uproarious humor and keen wit…

Kushner has so much to say about all of these things that there are points where the dialogue literally overlaps — with two or three conversations happening simultaneously. Crazy, for theater; but lifelike, you have to admit.

And by the time the second intermission comes, about the time when people would usually be shuffling to the parking lot, the audience is so riveted at what’s going on, they wouldn’t think of leaving, let alone dashing to the restroom, lest they miss its resumption.

Kushner spends a lot of time these days on screenplays and a series for HBO, which is a shame since iHo, as he likes to call it, is so full of theatrical mastery — of characters, of tension, of uproarious humor and keen wit, of unexpected visual spectacle and a mysterious suitcase; of life and death and love and the panorama of ideas, history and thought, presented by a writer who refuses to talk down to his audience (or even look at his watch as the pages pile up).

Most of all, Kushner is doing what the central character exclaims at a key moment: “I’m still thinking.”

And what a wonderful thing that is.

For all of that, there are still traces of what an unfinished thing it must have been in its premiere. “Any good theater in Minneapolis?” is the first line, a throwaway reference to the initial high anticipation for the work.

Another bit about cell phones in theaters has rarely been so strongly addressed in the body of a play, only to pay off hilariously later.

Credit director John Vreeke for keeping this triple-trailer semi truck on course. Good thing for him he’s  working with a first class cast.

Tom Wiggin brings a growling contentiousness as Gus, a still quite vital 72-year-old former longshoreman and union organizer, whose attempts at suicide has brought the concern of his three adult children, each of whom have their own issues.

Gus is a throwback not just because he’s a labor guy and former party member; he’s a working class scholar, busying himself by translating Horace.

Susan Rome is very good as the daughter who gave up a medical career for socially engaged one; her partner (Lisa Hodsoll) is a doctor of theology who is about to give birth.

Lou Liberatore is a high school teacher with a husband (and former theology teacher of the above partner) (Michael Anthony Williams), caught up in a relationship with a young hustler (Josh Adams).

Tom Getman plays the straight offspring, a contractor with anger issues and a wife (Sue Jin Song) who tries to smooth things over.

In the background (at least in the start) is Gus’ sister, played by Rena Cherry Brown, with a sour look on her face, the perfect deadpan for the action all around her. Though she’s had a radical background as well, she has lately turned to Mary Baker Eddy (who provides the second half of the title; the first is from the title of a political tract by George Bernard Shaw).

Jennifer Belle Deal has a startling role late in the play, as someone who dryly explains the methods of suicide — a scene as tense and serious as others are boisterous and chaotic – Marxist more in the sense of the Brothers than the revolutionary philosopher.

The action largely takes place inside the family brownstone in Brooklyn, which may or may not be sold if Gus does the deed. The daughter’s ex (James Whalen), a real estate lawyer, happens to live in the basement and is ready to help with any sale.

Misha Kachman’s set is a good place to spend a few hours; its overstuffed bookcase denotes a life of reading (though it slants right instead of left). The cracks in the walls above the fireplace would denote fissures in the family as well, if they don’t crack open further when the angry son throws the bust of Italian patriot Garibaldi into it. Her brownstone facade floating ominously above them may be something you don’t notice until two hours in because of all the action on stage.

The projections and sound of Jared Mezzocchi and Eric Shimelonis, respectively, perfectly frame the action and time.

But there’s something timeless about the work of Kushner, brought to us in this stirring production, creating something that will stay with us.

The Intelligent Homosexual’s Guide to Capitalism and Socialism with a Key to the Scriptures continues through Dec. 21, 2014 at Theater J, at the Washington DC Jewish Community Center’s Aaron & Cecile Goldman Theater, 1529 16th St NW. Tickets at 800-494-8497 or online.