Theatre Review: ‘The Man Who Came To Dinner’ at Spotlighters Theatre 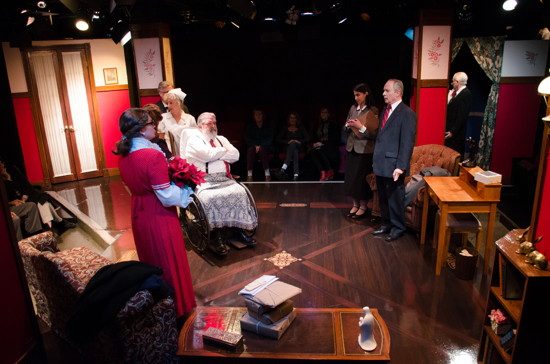 The cast of ‘The Man Who Came to Dinner.’ Photo by Spotlighters Theatre/Chris Aldridge, CMAldridgePhotography.

Director Fuzz Roark does a beautiful job in capturing the dramatics of The Man Who Came to Dinner using the cozy, yet limited space of the Spotlighters Theatre in Baltimore City.

The Man Who Came to Dinner is a classic comedy from 1939 by Moss Hart and George S. Kaufman about dinner guests that won’t leave.

Sheridan Whiteside (Mike Galizia) is a famous writer. While on tour in Ohio, he trips and fractures his hip on the Stanley’s (played by Jim Hart and Julie Press) sidewalk. Within seconds Whiteside is given instruction by his doctor  (Glen Charlow) to stay at the Stanley’s until he is well. It doesn’t take long for Whiteside to start berating the Stanley’s, their guests and even his fragile on-site nurse that was once a fan (Penny Nichols).

…’The Man Who Came to Dinner’ is invigorating…sensational acting at its best!

Galizia does an excellent job portraying a disgruntled, pompous, man who feels that he is entitled to everything. Whiteside demands that the Stanley’s limit their use of the main house and throughout his stay he engages in numerous long distance and overseas phone calls. His friends send him ridiculously lavish gifts, such as exotic animals, and he even invites guests to the Stanley’s home and demands that the butler and cook wait on his guests first. When presented with the phone bill, Whiteside states that he will deduct any utility from the $150,000 bill that he wants to collect from the Stanley’s after falling on their ice.

He spares no one in his antics except for the Stanley’s two children (played by Claire Iverson and Dennis Binseel). For them, he turns into a gentle soul that encourages them to live life the way they wish. Even if it cost them an embarrassing punishment from their parents later in the show.

Garima Bhatt made her debut as Whitside’s much younger secretary (Maggie Cutler). Cutler worked for Whiteside nearly ten years. She understands him in a way that others do not. Bhatt is very convincing in her role as a mild-mannered, meek woman. Yet, she gracefully changes positions when Lorraine Sheldon (played by Caroline C. Kiebach), a promiscuous actress, tries to meddle in her love life. The two women are exact opposites and it’s humorous to see the interaction between them.

Overall, The Man Who Came to Dinner is invigorating. Between Galizia’s powerful tone and snide remarks, and Kiebach’s flirtatious ways and high-pitched voice, there is plenty of drama to go around. Spotlighters gives us sensational acting at its best!

Everyone involved with the production, including the cast, crew, and creative team, is to be commended for delivering such a grand performance in such an intimate setting.

Running Time: Approximately 2 hours and 45 minutes with one 15 minute and one 5 minute intermission.

The Man Who Came to Dinner runs through Dec. 21, 2014 at the Spotlighters Theatre, 817 St. Paul St, Baltimore, MD, below the Madison Apartment complex. Entrance is to the side of the building. Tickets are available online.