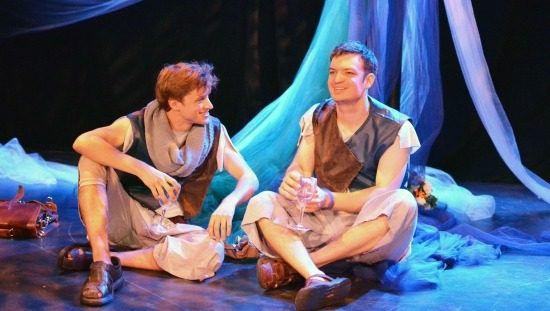 Anybody can put on A Midsummer Night’s Dream, and many theater companies do, year in and year out.

But hardly any pairs the Shakespearean romp with his lesser known The Two Noble Kinsman, though they share the same locale and a few of the same characters, if not the tone.

In fact, hardly anybody stages The Two Noble Kinsmen at all. The bold young Brave Spirits Theatre, which is is in the middle of presenting both plays in repertoire at the Anacostia Arts Center, says this may well be the first full production in the Washington, D.C. area — quite a pronouncement for a play first published in 1634.

The Two Noble Kinsman is that oddest of Shakespearean plays — one that he co-wrote, scholars now agree, with John Fletcher. Freely adapted from Chaucer’s Knight’s Tale, it features, in minor roles, two of the stars of A Midsummer Night’s Dream, played by the same actors – Ian Blackwell Rogers as a swaggering, self-confident Theseus and Jacqueline Chenault as his bride Hippolyta (still singing “White Wedding” from the other play), as if making cameos. Brave Spirits is encouraging audiences to see both in tandem to more fully show different aspects of the same realm and setting — ancient Athens.

There is much to admire about the Brave Spirits troupe …

It is Theseus’ sister, Emilia that is more the focus in Kinsmen, with a pair of cousins competing for her love.  It’s a rather strange obsession each of them has for her; they’ve only spied her from behind the jail bars where they’ve been kept. Carolyn Kashner, as Emilia, tempers her allure with understandable befuddlement at how inexplicably stricken they both are.

As Palamon and Arcite, Willem Krumich and David Mavricos are the very figures of valorous brothers in arm, full of love and respect for one another, at least until they pledge lifelong emnity for one another.

Krumich seems to have particular fun playing different characters, trodding on stage as a doddering countryman in scenes just after he is the dashing swordsman.

If they’re crazy in love for this girl from afar, at least they’re not just completely crazy, as is Jenna Berk’s character. She would seem so small a character that she only gets the title of Jailer’s Daughter in the play, but after helping spring Palamon, falls so deep for him, she’s tumbles off the deep end.

This gives a great opportunity to Berk to get a little more out there every time she reappears on stage. But she may be stepping a little too far when she starts echoing the Billy Idol song.

There is much to admire about the Brave Spirits troupe under the direction of Charlene V. Smith — their eager ambition, the quality and passion of their performances, and the talent that has many of them double as backstage musicians (performing music by Zach Roberts).

They succeed despite the barest stagecraft in the black box theater — a maypole of gauzy fabric that is also used in Midsummer Night’s Dream; belted tunics and sandals the basic uniform of costume designer Melissa Huggins. But even when actors wear Topsiders instead of sandals, it’s not as glaring as, say, when they end the show by singing Pearl Jam’s “Betterman” a cappella.

Yes, it sort of fits the theme, but it is a little jarring to hear grunge-era balladry in the time of the Elizabethans (ditto the inclusion of the Stones’ “Wild Horses” and Pete Townshend’s “Let My Love Open the Door”).

But it’s no more odd than having Emilia wonder about which suitor she’ll choose, consulting photographs of the two (not etchings) as if she were TV’s Bachelorette on finale night. Why does she have to choose either of these lovesick warriors anyway?

That’s part of the reason The Two Noble Kinsmen may not be a well known play: its utter problem with its female characters, especially for a troupe whose mission includes addressing “the disparity of the female presence in classical theatre.”

It’s an interesting problem to see them tackle in such an intimate setting and a good opportunity to see the play, I guess for the first time in nearly 400 years here.