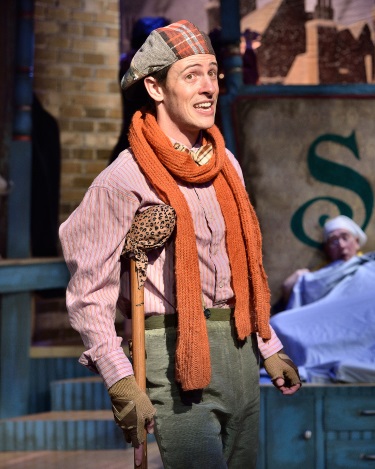 Chris Dinolfo as Tiny Tim with Conrad Feininger as Scrooge in bed. Photo by Bruce Douglas.

It’s only mid-November and the holiday fare at area theatres is already beginning to appear. A Christmas Carol by Charles Dickens is perhaps the most produced holiday story of them all. With its tale of Ebenezer Scrooge and his transformation from cold-hearted tight wad to warm and caring person, it’s no wonder the story continues to endure.

One thing about what Dickens wrote is that the story is quite scary for smaller children (six and under). The Ghost of Christmas yet to be basically represents death and that is something a five-year doesn’t want to necessarily think about around the holidays. So what is a parent to do if they want to introduce the younger children to Dickens’s story without all of the darkness? Go to Adventure Theatre MTC and check out the world premiere of Tiny Tim’s Christmas Carol, that’s what.

…here is a gift you’ll be totally glad you received.

Written by Tony Award nominated playwright Ken Ludwig and his son Jack Ludwig, here is a fun pocket-size version of the familiar story of Scrooge as told through the eyes of a fifteen year old Tiny Tim (Chris Dinolfo). At age ten, Tiny Tim is suffering from rickets (hence the crutch). He is unhappy that his dad Bob Cratchitt (Danny Pushkin) has to work on Christmas day for his employer Mr. Scrooge (Conrad Feininger). His friend Charlotte (Brittany Martz) and Mrs Cratchitt (Megan Dominy) feel the same way. They devise a very theatrical plan to teach Scrooge a lesson. From here the familiar three spirits appear and well, you know the rest.

Here is a prime example of how to make a Theatre for Young Audiences piece palpable not only for children but for adults too. While there are plenty of jokes in the script, master director Jerry Whiddon keeps the show honest throughout. The show never becomes campy which is something a lot of this kind of theatre unfortunately is. The audience was quiet and attentive all the way through and this is because the story was told in a way that kept you engaged from beginning to end.

The performances are top-notch as well. Chris Dinolfo as Tiny Tim has plenty of energy as he unleashes his plan to set Scrooge straight.

Conrad Feiniger’s Scrooge is just terrific and here is a prime example of how you can put the character of a bitter man across while still having some warmth right from the start. You never want to hate Scrooge, you want to root for him. Feininger’s portrayal makes you do that.

The rest of the cast has plenty of spunk and go get em power in multiple roles besides the main ones already mentioned.

Adding to Whiddon’s staging is the eye-popping scenery by Dan Conway. The set itself is designed as if it were a Victorian stage with a reveal for Scrooge’s bed I am not going to give away here.

All of the costumes by Collin Ranney are right in period but Phil Reid as the third ghost has a costume that makes the whole production by itself.

Martha Mountain’s lighting has some snazzy mood effects and Neil Mc Fadden’s sound design creates all the right atmospheres for the story.

For those wanting to start their holiday viewing a little early this year, make the trip to Glen Echo Park, turn left at the carousel and check out Tiny Tim’s Christmas Carol. With an award-winning playwright and his son, a director who is a master at his craft, and a cast of talented performers and designers, here is a gift you’ll be totally glad you received.

Running Time: 50 minutes with no intermission.

Tiny Tim’s Christmas Carol is running at Adventure Theatre MTC at Glen Echo Park (7300 MacArthur Blvd in Glen Echo, MD) through January 1, 2015. Tickets can be purchased online or by calling the box office at 301-634-2270.