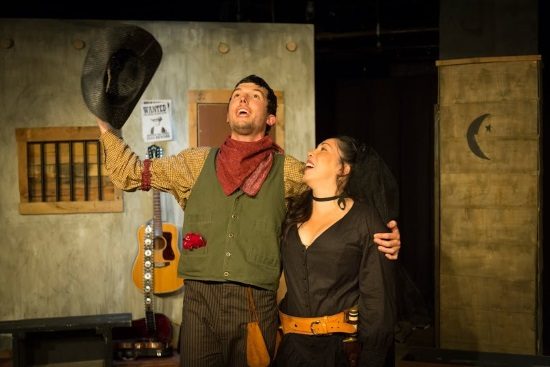 Twelfth Night (the western) at the Maryland Ensemble Theatre is a raucous and enjoyable evening’s entertainment. The show is marginally a musical, with entertaining and well-done musical scores and is directed by Tim Seltzer, who also directed such recent shows as The Eight Reindeer Monologues, The Complete Works of William Shakespeare- Abridged, and Amadeus.

There is a carnival atmosphere that envelopes the small stage with music being played at every lull and as with most all Maryland Ensemble Theatre productions, there is no fourth wall, so the audience is always engaged.

The idea of doing Twelfth Night as a western was the brainchild of New Britain, CT actor, director and novelist Steve Liskow, and has undoubtedly been perfected by Seltzer’s’s deft direction and staging. Just finding a cast with so many talented musicians was undoubtedly no small feat. The show uses the main plot points and diction of Shakespeare with the setting and costuming of the old west. Twelfth Night is among Shakespeare’s most lighthearted and lively comedy of errors and intrigues, wherein Viola (Caitlin Joy) is separated from her twin brother Sebastian (Jesse Marciniak) in a tempest when both are shipwrecked in Illyria, a province ruled by Duke Orsino, played as an old west Marshall by Tom Majarov, who is in love with the Countess Olivia. Olivia is played by the talented and confident actress Lia Seltzer, who is a regular in Maryland Ensemble productions. Disguising herself as a deputy, Viola falls in love with Orsino as she is used by Orsino to convey his amours to Countess Olivia. As things unfold, there are mistaken identities, forged notes, and as in most of Shakespeare’s comedies, a truly happy ending that includes a marriage, a betrothal and a reunification of the lost siblings.

What lends Twelfth Night so well to the old west setting is the comedy’s bawdiness and lightness, giving such wastrel characters as Sir Toby Belch and Feste an interesting comedic depth and making such things as the western version of Malvolio’s (D.C. Cathro) “yellow-stockinged and cross-gartered” a singularly amusing sight. Seltzer (Eleemosynary, I am Not my Mother, In the Next Room) and Joy’s ( The Lieutenant of Inishmore, Peter Pan, Act A Lady) performances help to carry the show with aplomb.

Other actors giving noteworthy performances include Steve Custer as an amusingly affected Antonio (The Importance of Being Earnest, Reefer Madness, It’s a Bird …It’s a Plane…It’s Superman! ), Matt Kline, playing a spirited Feste, ( It’s a Wonderful Life, The Importance of Being Earnest ), and Eric Jones (Reefer Madness, Children of Eden, The Rocky Horror Show) as Sir Toby Belch.

The production was uplifting and showcased Wild Bill Shakespeare’s malleable art at its best.

Twelfth Night at the Maryland Ensemble Theatre runs through November 16, 2014 at 31 South Patrick Street Frederick, MD 21701.  Tickets are available at the box office or online.