“…’Little Dancer’ soars big time in every way…bar none the best musical I have seen all year.” – Elliot Lanes.

Synopsis: With a powerhouse creative team featuring Susan Stroman, Lynn Ahrens, and Stephen Flaherty, this world premiere Kennedy Center musical is inspired by the story of a young ballerina immortalized by Edgar Degas in his famous sculpture. 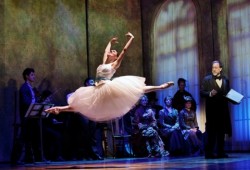 “What could be better than an evening of the music of Louis Jourdan and his influential jumping jive…” – Roger Catlin.

Synopsis: The boys are back in town, with a brand new look: bigger, bolder, and badder than ever. Classics like “Let the Good Times Roll” and “Is You Is or Is You Ain’t My Baby” have been remixed for an explosive, re-imagined tribute to “King of the Jukebox” Louis Jordan. Led by the fearless mind that stunned audiences with Bootycandy, director Robert O’Hara (The Mountaintop) is back at Arena Stage and once again “shaking up the world, one audience at a time” (The New York Times). Come and dance the blues away with Eat Moe, No Moe, Four-Eyed Moe, Big Moe and Little Moe, as big band meets boy band in this dynamic, dazzling musical revue. 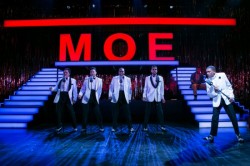 3. The Gift of Nothing at Kennedy Center.

Synopsis: In this Kennedy Center world premiere musical starring characters from the comic strip MUTTS, a charming cat searches for a special gift for his best friend, a lovable pup. Join Mooch and Earl for this heartwarming adventure! 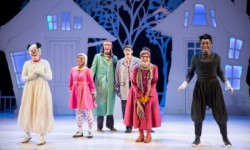 The Cast of ‘The Gift of Nothing.’ Photo by Scott Suchman.

4. The Intelligent Homosexual’s Guide to Capitalism and Socialism with a Key to the Scriptures at Theater J.

“...full of theatrical mastery — of characters, of tension, of uproarious humor and keen wit…” Roger Catlin.

Synopsis: When retired longshoreman and lifelong Communist Gus summons his three adult children to their Brooklyn home to explain why he’s selling the family brownstone and ending his life, things don’t go exactly as planned. The children bring their own dramas; Pill and his husband are stumbling as an old flame resurfaces; Empty and her wife are squabbling as they await the birth of their child; and Vic is confronting long-buried truths. A deeply emotional battle over what makes life worth living from Tony, Obie, Emmy and Pulitzer Prize winner Tony Kushner in a newly updated epic making its DC premiere. 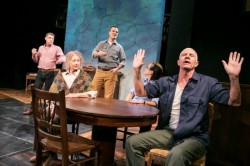 “The entire cast and production crew deserves many accolades for giving all of us another delightful gift of engaging, charming theatre.” – April Forrer.

Synopsis: When Mr. and Mrs. Dearly welcome a new litter of Dalmatians to their 1950s London home, Cruella de-Vil is quick to plot their kidnap. Loving puppy parents Pongo and Missis discover their location, and set out on a harrowing adventure through the countryside to rescue their puppies. With the help of several friendly dogs along the way, the family reunites on Christmas Day, and Cruella is defeated. But will the Dearlys take in all 101 dalmatians? 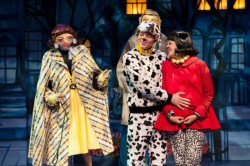 On a walk in Regent’s Park, Missis and Pongo share the news they are expecting a litter of Dalmatians. (L to R: Emily Kester, Jonathan Atkinson, and Caroline Wolfson). Photo provided by Imagination Stage.