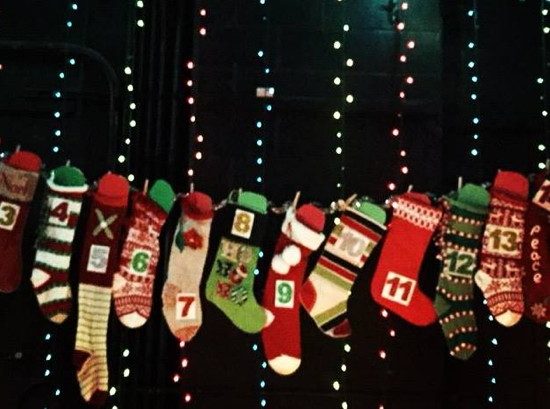 The numbered stockings that hold the names of the songs. Photo provided by Signature Theatre.

Looking for a glass of spiked eggnog and a place to bring your inebriated friends to get them in the holiday spirit? Your quest is over! Holiday Follies, Signature’s annual holiday showdown is an ensemble cabaret, this year with a choose-your-own-adventure bent. Tumble your buddies into the car and drive them out to Shirlington for an evening of fun holiday tunes, witty repartee, and the true unpredictability of live theater.

…seeing ‘Holiday Follies’ is a wonderful way to celebrate this season, with its powerful solos, energetic group numbers, and atmosphere of irreverence and merriment.

Signature Theatre–home of the prestigious American Musical Voices Project–prides itself on its illustrious history with musical theater. So it’s no surprise that pulling together a wacky ensemble cabaret show for the holidays is a piece of cake–your mom’s holiday fruitcake doused in rum and sprinkled with snowy powdered sugar, of course. With the silvery voices lent by the operatic Delores King Williams and the more Broadway-oriented Bayla Whitten, and the comic relief provided by Stephen Gregory Smith and the crooning Gannon O’Brien, plus the gaiety of a merry (and tipsy) audience and a swinging duet of piano and drums. It’s pretty hard to go wrong.

Friday night, Music Director Howard Breitbart jived on the piano, while the cast of four sang retro holiday and winter-themed tunes from Broadway and Motown, as well as some more recent classics and an original from Matt Conner’s new musical Silver Belles. A numbered row of seventeen festive stockings hung along a garland of twinkling lights upstage, each with the title of a beloved holiday song inside. To choose which song to perform, the cast asked the crowd to yell out whichever number they wanted to hear–making the evening wonderfully unpredictable.

In addition to singing beautiful serenades like “Winter Me, Summer Me” from Barbra Streisand’s The Way We Were album, and funny, modern classics like Straight No Chaser’s “Text Me Merry Christmas,” O’Brien, Smith, Whitten and Williams gabbed with each other, played games with the audience, and good-naturedly heckled right back when the crowd got a little too clamorous. “I can’t hear myself think!!” Smith squawked in mock frustration after a table near the front unabashedly chattered while the actor was trying to move the show along.

Clearly, the buzz of the audience plays a massive role in the character of an interactive show like Holiday Follies. By the end of Friday’s show, a particularly enthusiastic group of patrons in the fourth row were chair-dancing raucously to the finale: a romping, full-ensemble rendition of Brenda Lee’s holiday classic “Rockin Around the Christmas Tree.” But it’s to the credit of the cast and director/conceiver Walter Ware III that even in the mayhem of a randommized set list, each song was beautifully and meticulously performed. All the performances in Holiday Follies, from solo ballads to energetic group numbers, were full of heart and soul with an eye to pleasing the crowd. O’Brien especially, hammed up his on stage persona to entertain the spirited audience before him.

Not for the prim and proper or the faint of heart, seeing Holiday Follies is a wonderful way to celebrate this season, with its powerful solos, energetic group numbers, and atmosphere of irreverence and merriment. Everyone has so much fun together at Signature, it’s nearly impossible for even the Grinchiest hearts among us not to join in.

Holiday Follies runs through December 23 at the Signature Theatre at 4200 Campbell Ave. in Arlington, Virginia. You can purchase tickets online, at the box office, or by calling 703-820-9771.