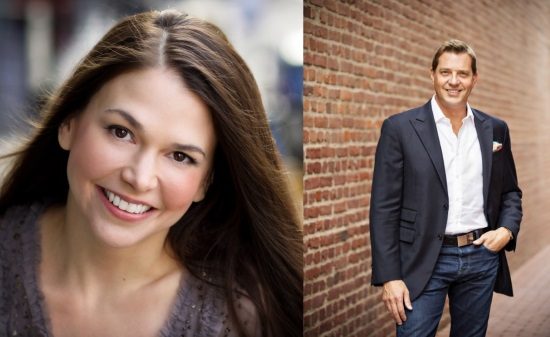 When Sutton Foster first began her performing career as a 15-year-old prodigy singer, making her debut TV appearance on Star Search, Americans were watching a star being born and developing into a future award-winning actress extraordinaire. On November 28-29, Foster elegantly graced the Concert Hall stage at The John F. Kennedy Center for the Performing Arts with the National Symphony Orchestra. Bringing along several of her dear friends, including Broadway actors, Joshua Henry, Megan McGinnis, with NSO conductor Steven Reineke, and Emmy Award winning American Arranger, Musical Director, and Conductor, Michael Rafter, a few of Broadway’s top-notch musicians including Clint de Ganon on the drums, and Kevin Kuhn on guitar, Foster and her all-star team filled the entire concert hall with their astonishing presence, captivating the hearts of an audience-packed theatre.

…Sutton Foster is a cherished and rare treasure who continues to shine and radiate more brightly than ever every time she glorifies any stage she lands on.

During her preliminary days as a professional actor, Foster appeared in The Will Rogers Follies, Grease!, The Scarlet Pimpernel, and Annie. 1999 was a year to remember with Foster conquering the stage as Eponine. From the very moment she opened her mouth and milked and savored every note for all it was worth in the musical number, “On My Own,” I knew within the depths of my heart and soul that this extraordinary lady was Broadway’s next “IT” leading lady and an inspiration many young, aspiring actresses that would be quick to follow and learn from. 2002 marked the transitional year for Foster as she took Broadway by storm, winning her first Tony Award for Best Performance by a Leading Actress in a Musical as the title role, Millie Dillmount in Thoroughly Modern Millie. And that was just it. Like in the musical number, “On My Own,” she certainly made it her very own, and she continues to nail every role she plays, every song she sings, every note she milks, stamping them as her own with her famous Foster signature.

After opening the evening with a lively, fully orchestrated rendition of the Overture to Cole Porter’s Anything Goes, and a jazzy soulful version of “I’ve Got You Under My Skin,” led by a dreamy, riffing saxophone, and warm strings, the brilliant NSO Conductor, Steven Reineke introduced Foster as the “epitome of the Broadway triple threats, having appeared in 11 Broadway shows, and winning 2 Tony Awards for Best Performance by a Leading Actress in a Musical.” Making her appearance in a stunning, heavenly blue dress, the genuine, sophisticated lady began her set with Duke Ellington’s “I’m Beginning to See the Light.” When Foster performs, the triple threat knows exactly how to make and establish meaningful connections with each of her audience members. Her rendition of Cole Porter’s “Anything Goes” from the title show is by far the most pristine and breathtaking version I’ve ever heard. Foster’s crystal clear auditorium-vibrating belt is one that leaves an audience yearning to hear more followed by her bewitching version of “I Get a Kick Out of You.”

Thank goodness Foster brought back some highlighted favorites from her intimate concert she performed at the Café Carlyle in NYC, September of 2013. Before gloriously singing John Denver’s “Sunshine on My Shoulders,” she warmly invited the audience to reminisce over her childhood days, dedicating the highlighted number to her mother who unfortunately passed away last year. May she rest in peace. Release the waterworks as this number definitely moved me tears. This was by far the sweetest, most divine, and most soul-stirring version I’ve ever heard as I felt like I was 19 all over again when I was first awe-struck watching her powerful, celestial presence on stage. It’s a wonder how she even kept her poise together underneath all of her profoundly held emotions.

What a delightfully perfect transition as she re-collected herself and realized she almost forgot to introduce Mr. Joshua Henry for the next number. It was so lovely to see her humble personality shine through. Later on in the evening, Foster re-introduced Henry as the performer she stalked on Facebook, shortly thereafter landing him a performance opportunity of a lifetime with her, in the recently closed Broadway musical, Violet. And what a voice! Soaring over the high notes, Henry shook the concert hall with his jazzy, soulful powerful range, bringing the entire house to church as he sang, Sam Cooke’s “A Change is Gonna Come.” “Oh hey, how’d it go?” Foster nonchalantly yet hilariously asked Henry after he finished performing his crowd-pleasing number, before showing the audience a video clip of a Steve Martin gig she was watching backstage on YouTube. Transitioning into a crisp, sharp, yet zesty tap number with Henry, in Arthur Freed/Al Hoffman/Al Goodhart’s “Fit as a Fiddle,” Foster and Henry together brought a unique, power-packed belting blend combo to the house, leading into intermission.

As the audience waited in anticipation for Reineke to make his reappearance on stage, you could hear a group of patrons clapping and cheering which led the conductor to make his perfect re-entrance right on cue. Although the Overture to Thoroughly Modern Millie was slightly rapid in tempo, reminding me of the Energizer bunny, the number was absolutely invigorating and a beautiful opening to Act 2.

After introducing Foster’s future staring role in TVLand’s new series Younger, with actress Hilary Duff, Reineke energetically led the orchestra into “The History of the TV Overture,” which was a tribute and combined medley of popular and famous American television theme songs from past generations including The Adams Family, Mr. Rogers’ Neighborhood, The Twilight Zone, The X-Files, and I Love Lucy. Reineke is an absolute vibrant joy to watch on stage as he checked in with the audience from time to time with the facial expression of, “remember this?…and this one?? OH yeah! How about this one???”

Another few highlighted numbers of the evening included the angelically soulful, and blissfully blended duet of Craig Carnelia’s “Flight,” with Foster and her best friend, Megan McGinnis, and Henry’s groundbreaking performance of “Let it Sing,” from Violet. The best friend duet about a yearning and unleashing of the spirit in longings of a free-willed and free-spirited life touches me every time I hear it. I was absolutely floored to hear the audience stomp and clap on cue throughout Henry’s number as he passionately sang and riffed, “You got to give yourself a reason to rejoice and let it sing!” from the very depths of his core soul.

With Foster’s endearing personality, a triple-threat actress of a lifetime, along with her entire team of highly acclaimed performers and musicians, Sutton Foster is a cherished and rare treasure who continues to shine and radiate more brightly than ever every time she glorifies any stage she lands on.

Sutton Foster in concert with the NSO was a two night only event on November 28th and 29th 2014 at Kennedy Center’s Concert Hall.

For tickets to all upcoming events at the Kennedy Center, click here.