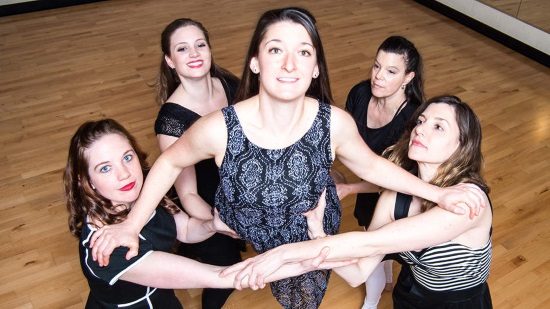 The company of The Interpersonal Underworld. Photo courtesy of the production.

Dance and industrial psychology might not seem to be natural allies. But they blend beautifully in ACW Dances’ The Interpersonal Underworld, a two-part modern-dance piece about relationships at work.

…the women were well matched and perform beautifully together.

The Winter Dance Concert of ACW Dances, The Interpersonal Underworld explores these relationships through five archetypes–the “strategist,” the “motivator,” the “diplomat,” the “self-starter,” and the “entrepreneur”–as they move through three different phases of teamwork.

If this sounds a little dry, it isn’t. Under the direction of Abigail Wallace, the company’s founder and artistic director who also dances the role of the “strategist,” she and the other four women in the piece move with fluidity and grace, and relatively little angularity.

Even when the choreography called for conflict in the “control” phase of the dance, the women were well matched and perform beautifully together.

Perhaps most enthralling were the many times the dancers lifted each other—something not seen often in classical dance.

Because this is an ensemble piece, it is more comfortable to name the dancers without offering individual reviews. Aside from Wallace, they are Kerry Doyle (“motivator”); Paula Giammarco (“diplomat”); Ayelet Haran (“self-starter”); and Liz Naro (“entrepreneur”).

Adding humor (and verbal skill) to the dance was Matt Levitas, acting the role of the “researcher.” He questions both the audience and the dancers about their observations, coming to the conclusion that human personality is more malleable than one might think.

Certainly, in the hands of these talented dancers, the human body is more malleable than one might think.

Wallace integrated her choreography perfectly with the music by Mark Charles Smith (assigned the role of the “mobilizer”).

According to its website, the mission of ACW Dances is to engage with the community through performance, outreach, and collaborative projects. The work crosses many disciplines and uses dance, visual art, and often-original music.

ACW Dances aims to develop as an independent company in the greater DC area.

As she has done in The Interpersonal Underworld, Wallace often begins her choreography from a scientific perspective, with the goal of investigating a scientific theory or discovery through movement

Running Time: one hour with no intermission.

The Interpersonal Underworld  runs through December 13th 2014 at Gunston Theatre II which is located at  2700 South Lang Street, Arlington, VA 22206. Tickets are $10, and free to children five and under. Tickets can be purchased at the door or by clicking here.