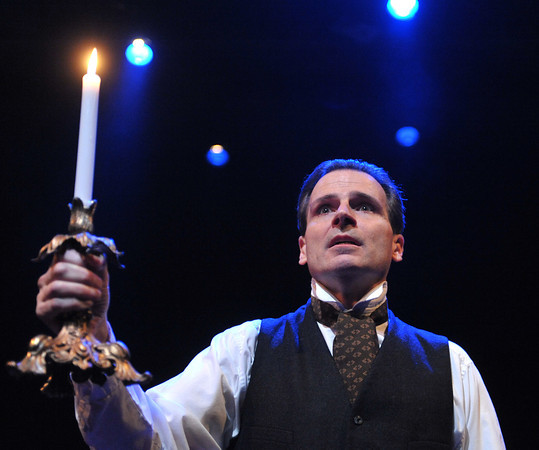 Adapted and Performed by Paul Morella from Charles Dickens’ original novella and reading tour, Olney Theatre Center presents the classic and chilling tale of A CHRISTMAS CAROL: A GHOST STORY OF CHRISTMAS. (Photo by Stan Barouh)

Any actor will tell you that playing a role is not simply memorizing lines from a script and following the play’s director. One needs to do research and delve into the character’s qualities and persona and for a couple of hours lose one’s own identity and virtually become that character.

In A Christmas Carol: A Ghost Story of Christmas now playing at the Olney Theatre Center’s Mulitz-Gudelsky Theatre Lab, multiple Helen Hayes Award nominee and Olney stage veteran Paul Morella does exactly that.  Except there is a major difference: he not only acts out a singular character, he plays over two dozen characters in this heartwarming, imaginative adaptation of Charles Dickens’ 1843 classic novella A Christmas Carol.

…captivating and is theatre at its best.

Mr. Morella’s hand in this one-man show stretches out from not only performing the myriad roles but also to being the theater’s usher (welcoming audience members with a warm smile and handshake), self-directing his own performance and turning in a fine job as set co-designer.  This is not a new experience for Mr. Morella as the current adaptation that is now running through December 28 is his fifth consecutive year at Olney—clearly a popular Christmastime tradition for the D.C.-area audience.

Surrounded by an assortment of early Victorian furnishings on the cozy stage including a period desk, chairs, fireplace, Persian rugs; a scattering of clocks, books, candles and a candle chandelier overhead, Mr. Morella spins the fabled yarn that centers on the miserly-turned-loveable Ebenezer Scrooge (Bah! Humbug!) who finds redemption and becomes an admirable chap at play’s end. Prior to the performance Mr. Morella advises the audience that he is not to be seen as an actor performing this play but instead a “guide” to the story whereby the audience is urged to let their imagination run free.

Indeed, as the sole performer Mr. Morella recites the lines from the book as they were intended, and Dickens, at times, actually performed the novella by himself.  Therefore, along with the charming set that also displays a foggy vapor at various points in the story, there is a great deal of historical authenticity that enriches the experience.

Adding to the genuineness, many of the characters’ good attributes as well as shortcomings in A Christmas Carol related in some manner to Dickens’ own life’s experiences that included struggling to make ends meet and witnessing his father hauled off to debtor’s prison while he was a young lad in London.

Ebenezer Scrooge’s Christmas Eve to Christmas Day evolution from when he began as a mean, arrogant and friendless soul to one that ended up as a caring, generous human being embodies the true meaning of the Christmas holiday spirit.

This extraordinary transformation in Scrooge’s personality was accomplished through the eerie appearance of the ghost of Scrooge’s late partner Jacob Marley followed by the nocturnal visits from three other ghosts: one representing Christmas Past, one from Christmas Present and one from Christmas Future.  These ghosts pointed out Scrooge’s failures, the effects of his actions, and the consequences that could occur in the future.

Besides narrating the story as Dickens, Mr. Morella deftly switches characters with amazing fluidity using all the acting tools in the toolbox.  He accomplishes this competently not with tedious wardrobe changes but with voice inflections, facial expressions, gestures and mannerisms unique to each character.

At one moment he is Scrooge and then he seamlessly switches to either Bob Crachit, Tiny Tim, each of the three ghosts and a host of other characters including females and children.  When reverting back to Scrooge or another character, there is solid consistency.

Contributing further dimension is Edward Moser’s excellent sound design that creates echoes when the ghosts speak, the sounds of church bells, doors opening to signify entrances from certain characters as well as other devices.  Sonya Dowhaluk’s lighting design is also effective employing light fades and keeping the stage illuminated at a subdued level (but not too low) to simulate candlelight.

Mr. Morella’s ability to tell this famous story is captivating and is theatre at its best.  This would make a great pre-holiday gift or a stocking stuffer for anyone who loves theatre and appreciates the skills of a superb actor (or guide).

Advisory: Intended for ages 10 and up.

A Christmas Carol: A Ghost Story of Christmas runs through December 28 at the Olney Theatre Center, 2001 Olney-Sandy Spring Road, Olney, MD 20832.  Tickets may be purchased by calling the box office at 301-924-2654 or visiting online.