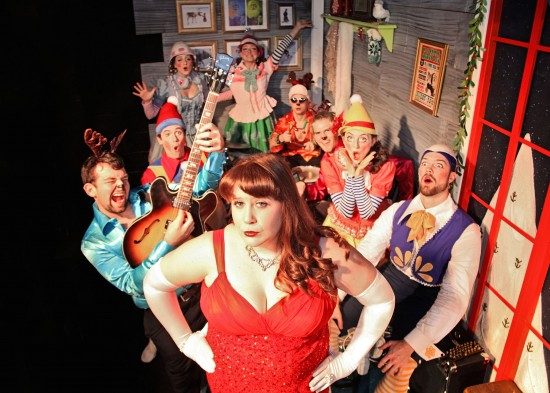 The cast of ‘A Very Pointless Holiday Spectacular.’ Photo provided by Pointless Theatre.

Tired of the usual Christmas fare? Sick of A Christmas Carol and The Nutcracker and all those tacky Christmas TV movies on Lifetime?

Pointless Theatre has begun their 2014-2015 season with something very different. The aptly named A Very Pointless Holiday Spectacular: The Annual North Pole Talent Show is the holiday offering from this (relatively) young DC theatre company. According to the press materials, the theatre’s goal is “…to create a non-denominational celebration of the winter season that is sincerely festive and irreverent towards traditional holiday entertainment.” The show is co-directed by Frank Cervarich and Lex Davis, and it’s an eclectic blend of comedy, dance, music and more. But do all of the pieces fit together into a satisfying whole?

As the title indicates, the North Pole is having a talent show (albeit one with no prizes or announced winners). Mrs. Claus and a group of five energetic elves perform a series of songs, sketches, dance numbers, comedy improvs and more. At times, the production abruptly switches modes, and becomes something closer to a late night talk show, with Mrs. C sitting and cracking jokes with a trio of eccentric puppets. Despite the G-rated holiday trappings, the performance frequently turns blue.

All of the elves worked together with strong chemistry and a high level of youthful energy, like something out of a 1970s production of Godspell.

Cervarich and Davis keep the pace up and vest each moment with creativity and specificity. (This may be the first Christmas show to feature both candy cane product placement and a rapping Mrs. Claus.) However, there are moments when it isn’t entirely clear if the material is being presented sincerely or satirically. The show is also steadfastly arch and over the top in its tone. And as time goes on, one can’t help but wish for some sincere emotion to leaven the evening.

Among the cast, standouts included Anna Lynch, whose Cirque du Soleil-style acrobatics were a truly sublime highlight. Matthew Sparacino juggled with panache and also scored big laughs with a foul-mouthed puppet. Other highlights include a tap dance number and a duet with a baby doll.

A Very Pointless Holiday Spectacular isn’t so much a full-length play as it is a review, and is best viewed in that context. The program indicates that the show’s various acts are meant to utilize the previously untapped talents of the cast. Some segments were more effective than others. On the night reviewed, the cast successfully met the challenges of the improvised segments with aplomb, creativity and real humor.

All of the elves worked together with strong chemistry and a high level of youthful energy, like something out of a 1970s production of Godspell. Unfortunately, the characters they play are, ultimately, one-note and child-like, largely divorced from any recognizable, relatable human behavior. While such characters might work for a single sketch, some audience members may find them a little much for a full evening’s entertainment.

Advisory: For adults only.