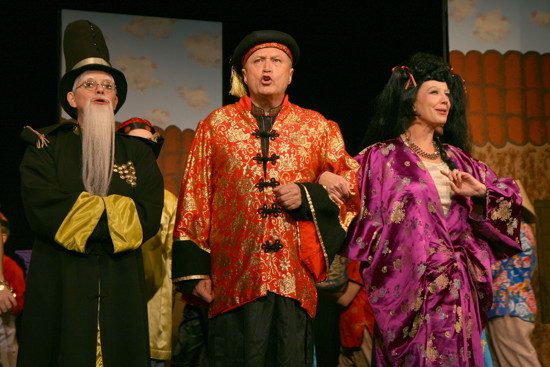 Silliness and merriment abound by the bucketful in Aladdin, the latest British pantomime brought to Kensington Town Hall by the intrepid and quite wonderful British Players. The dizzying show rolls off the stage like a tidal wave sufficient to douse even the worst of holiday blues and charm the crankiest of the Grinches Among Us.

The style of this show is British pantomime, not to be confused with silent mime as these are very vocal actors. Dating back to the Restoration, British pantomime, or “panto” as the Players call it, features a traditional children’s fairy tale riotously embellished with bizarre characters and what the notes call “a wonderfully strange mixture of elements from the theatre, ballet, opera, music hall and musical comedy.” Derived from the Italian commedia dell-arte, British pantomimes are performed at Christmas.

While last year’s pantomime Cinderella is an impossibly tough act to follow, there is plenty to delight in this year’s Aladdin.

Here we are transported to China of yesteryear where we encounter the calculating, trifling Empress and the empty-headed, pompous Emperor played with amusing aplomb by Teri Allred and Colin Davies. Like most of the characters in this show they are gorgeously costumed in silky and glittering Chinese dress designed by costumers Jamie Breckenridge and Joan Roseboom. The costumes alone are a show. We also meet Major Domo, played well by Morgan DeHart.

Silliness and merriment abound by the bucketful in ‘Aladdin’…

The Empress and Emperor plan festivities to net a husband for their daughter Princess Martini, who is vapid in Valley Girl fashion (or is it Taylor Swift?) and prone to order her suitors tortured and executed. Whichever, she is nicely played by Ellie Miller, a senior at Wootton High School, and her sidekick Ting Ming is performed with excellent fun by Sara Cath.

Onto the stage comes the black clad, evil Abanaza, played with appealing zest by Daniel Geske, a graduate of the Birmingham School of Acting in England. As the play progresses, the audience greets him with loud boos, which he acknowledges with arched brow and wicked smirk. Intent on ruling the world, his first step is to seize the Magic Lamp and have the genie deliver Princess Martina to be his wife. He is reminiscent of Henry Kissinger. His sidekick is the sycophant Won Ton, slyly performed by John O’Leary.

To retrieve the lamp from a haunted cave he needs the magical power of an innocent youth and so seeks out his supposed nephew Aladdin, a young man of integrity though blindly in love with the beauty of Princess Martini. He is portrayed ably by a woman, understudy Joanna Matthews at the Dec. 6 performance (sexes are often reversed in British pantomime).

Soon Aladdin is wandering in the haunted cave beset by five skeletons, their dance perhaps the most charming episode of the play. The dancers are Teri Allred, Loretta Collins, Libby Dasbach, Callie Etches and Allison McCord; the choreographer is Lindsay Droter. Aladdin is rescued by the Genie of the Ring, played by John Barclay Burns who delivers a smashingly fey performance. Abanaza though deceives all and Aladdin’s fortunes look grim.

It takes a while to straighten this all out but a happy ending prevails, as is customary with British pantomime. Additional excellent performances are given by Eileen Kent as Inspector Chu and Emma Nalls as The Great Powerful Genie of the Lamp.

A delightful show, and the British Players are plotting yet another auspicious pantomime for next year’s Christmas, the title to be announced, while their next show opening March 13, 2015 and promising as well is How the Other Half Loves.

Advisory: No violence and occasional sexual innuendo in good taste that goes over the head of children in the audience.

Running Time: Two and a half hours with a fifteen-minute intermission.

Aladdin runs through December 21, 2014, At Kensington Town Hall, Kensington, Maryland, Friday and Saturday nights with a Saturday and Sunday matinee. Tickets can be purchased calling 240-447-9863 or click here.