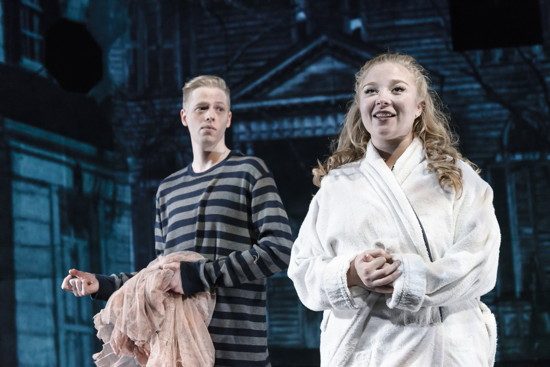 As far back as I can remember, Frank Capra’s film It’s a Wonderful Life has been part of my holiday season. I remember first watching it on a small black-and-white television my parents had upstairs in the guest bedroom while they hosted their annual holiday party for grown-ups downstairs. My sister and I complained about the black-and-white set, and as my mother went back downstairs she said, “Well for this movie it doesn’t matter anyway; it’s in black and white.” My sister and I groaned, but TV time was TV time, so we watched it. From that first viewing, I was hooked.

Everything about the story is magic. From the small town intimacies to the thought that there really are guardian angels out there watching over me. It’s a Wonderful Life is based on the short story “The Greatest Gift” written by Philip Van Doren Stern in 1939 and published privately as a Christmas card to family and friends in 1945.

The entire cast works well as an ensemble, and their joy of being on stage together is obvious.

The film It’s a Wonderful Life begins with George Bailey, a man who wants “shake off” his small town and travel the world but is now at his wit’s end. He thinks has lost everything with the impeding closing of his family business and probably criminal charges, and he begins to think that he is worth more dead than alive, thanks to a meager life insurance policy. Complementing While George contemplates suicide, an “angel 2nd class” answers the prayers of George’s many friends and family, and with the help of a “higher force,” the angel shows George what the world would be like without him in it.

George realizes how stark and depressed the world is without him and asks for his life back no matter what happens with his business, because he realizes that life is the greatest gift.

The stage play by James W. Rodgers is basically the same as the movie, and the Howard Community College’s Arts Collective production of It’s a Wonderful Life, directed by Gareth Kelly and Anthony Scimonelli, delivers all the charm and enchantment I expect in a production of this tender classic.

Noah Bird as George Bailey delivers one of the most earnest performances I’ve seen this year, and his scenes with his wife Mary, played by Rachel Bailey, are so heartfelt and compassionate. Rachel Bailey’s Mary is believable as the stalwart wife of a dreamer husband. Other standouts are Emma K. McDonnell with her light-hearted delivery as the angel 2nd class, Clara Odbody , and William Stanley III as the well-meaning but hapless Uncle Billy. The entire cast works well as an ensemble, and their joy of being on stage together is obvious.

The set, designed by Jeff Harrison, is creative with many doors and window panels cut into a solid backdrop that opens to allow for people and set pieces on the stage. On the solid backdrop, large digital pictures, designed by Riki Kim, are projected to show the changing scenes. Some of my favorites are the snow-covered bridge and the old house that George and Mary move into after they get married.

I can recommend adding Howard Community College’s Arts Collective production of It’s a Wonderful Life to your holiday celebrations. They do a wonderful job in telling a beautiful story.