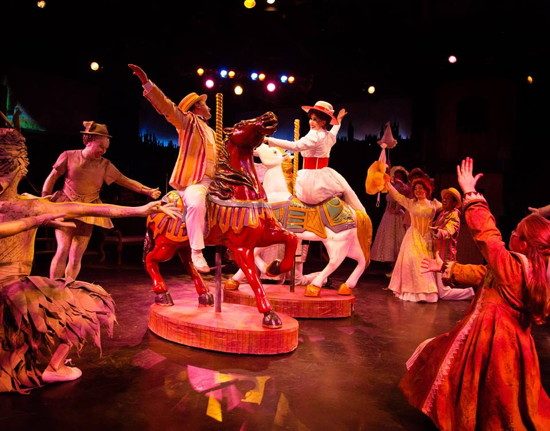 Jeffrey Shankle as Bert and Maura Hogan as Mary Poppins with the cast of Mary Poppins. Photo provided by Toby’s Dinner Theatre of Columbia.

Magic fills Toby’s Dinner Theatre of Columbia for their production of Marry Poppins, The Broadway Musical, a show about an extraordinary nanny who literally swoops in to care for two troublesome children, Michael and Jane Banks. Based on the stories of P.L. Travers and the Walt Disney Film, with original music and lyrics by Richard M. Sherman, Robert B. Sherman and book by Julian Fellows, co-created by Cameron Mackintosh and directed by Toby Orenstein and Lawrence B. Munsey, this professional regional production sparkles as a Broadway-caliber show.

The first time Mary Poppins was on stage was at the Bristol Hippodrome, starting with previews from September 15, 2004, before moving to the Prince Edward Theatre on December 15, 2004. It is the only Disney musical to have premiered in the UK. The Broadway production debuted on November 16, 2006 at the New Amsterdam Theatre and ran for over six years, becoming the 30th longest running show in Broadway history (surpassing Pippin).

…a special and entertaining evening is practically guaranteed at Toby’s production of Mary Poppins, The Broadway Musical.

Mary Poppins is the story of the Banks family, who live in a big house in London on Cherry Lane. Things are not going well for the family, and they are in need of a new nanny after Jane and Michael chased the latest one out of the house. Mr. Banks wants someone strict for the job, but the children have their own ideas. They believe a nanny should be fun, and they sing about it in “Perfect Nanny.”

This is when Mary Poppins appears at their doorstep, and Jane and Michael sing that she is “Practically Perfect.” From “A Spoonful of Sugar” and “Supercalifragilisticexpialidocious” to “Anything Can Happen,” Mary Poppins takes the children and their parents on a magical and memorable adventure. She teaches them, and us, what it is truly important in life and that “anything can happen if you let it.”

Maura Hogan’s Mary Poppins is “Practically Perfect” in every way! Her voice is robust and lovely. Judging by the happy smiles and applause all around, she had no problem convincing the children and adults that she possesses all the charisma needed to play this iconic nanny.

Jeffrey Shankle, as Mary’s dear friend Bert, dances as well as he sings. In one of my favorite songs in the production, “A Chimney Swept/Step in Time,” he easily leads the cast in a beautifully choreographed song and dance number.

David Bosley-Reynolds plays George Banks, the father and the character that does most of the changing throughout the show. He is very believable as the stern father and then just as convincing as he becomes the easygoing family man.

The two children in this evening’s shows were Caroline Otchet as Jane Banks and Anderson Franco as Michael Banks. They held their own with the adult, professional staff and shined in “Anything Can Happen.”

The entire cast works well together, and all can dance and sing wonderfully, but another standout is Heather Marie Beck as Mr. Banks’s horrendously strict nanny in “Brimstone and Treacle.”

There are many scenes of flying in this show, and they are all enchanting and well-done, thanks to the directors, Flying Crew (Dean Davis and Lawrence B. Munsey) and the Scenic and Lighting Designer (David A. Hopkins). The costumes are perfect and well constructed thanks to Costume Designer, AT Jones & Sons. All the serving staff that took such good care of all of us and had to go on stage right after dinner service a shout out and thank you! We loved our meal and enjoyed watching our waitress, Patricia Targete, sing and dance on stage as part of the excellent Ensemble.

Overall, a special and entertaining evening (and afternoon if going to the brunch performance) is practically guaranteed at Toby’s production of Mary Poppins, The Broadway Musical.

Running Time: Approximately 2 hours and a half with one 20-minute intermission.