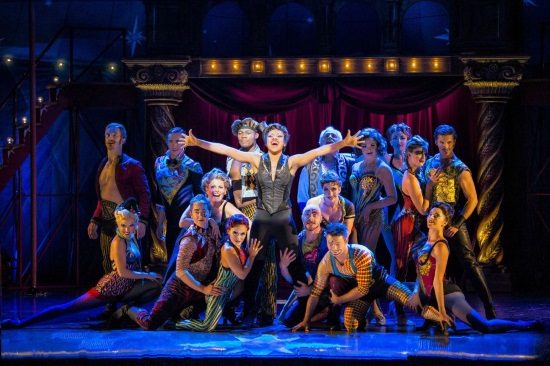 Sasha Allen at center with the cast of Pippin. Photo by Terry Shapiro.

When Director Diana Paulus and set designer Scott Pask first collaborated together on the musical Pippin, both created worlds that scoped beyond their wildest dreams and imagination.  Thoughts of delving into the realistic, fierce, and collectively, combined forces of diving into the unknown journey of the show was one of the largest and most exciting undertakings for this authentic, collaborative team. This past Tuesday, The Broadway National Tour of Pippin started a three week engagement at The National Theatre in Washington, D.C.  Recently having worked on Cirque du Soleil’s Amaluna, Paulus describes that experience as “just such an amazing opportunity for Scott and me to increase our experience of what is possible in the theatre.  It certainly enriched my perspective on the traditional form of the circus.”

Following in the footsteps of the son of Charlemagne, (the leader of the Holy Roman Empire), Pippin struggles to find the meaning in his life. Through the suggestions of the medieval era in sets and costumes with the themes of sexual experimentation and upheaval presented in the American 1970s, the show was originally choreographed by and directed by Bob Fosse with lyrics by Stephen Schwartz.

…this is one production not to be missed.

Surprising and enticing elements of magical illusion most certainly colored the world of the theatre all around.  For starters, what an absolutely refreshing take on having a female Leading Player. Typically the role is played by a male, who was originated by Ben Vereen in the Original production of the Broadway show.  From the first moment, Sasha Allen commands the stage as the Leading Player, her powerful spine-chilling voice is authentic and magnetic, readily drawing in her entire team of players/dancers/acrobats in the fantasy-filled vibrant land throughout the crowd-pleasing opening number, “Magic To Do.”  Despite a few moments where I lost a sense of Allen’s connection with the players and the audience members,  her groundbreaking vocal dynamics carried the entire show beautifully.

Pippin’s opening solo, “Corner of the Sky,” (played by Kyle Dean Massey), was simple, sweet and refined as he introduced his mission to the audience in searching for the existential meaning of his life.  Other vocal highlights throughout the show included Allen’s glorious and vocally magnanimously charged rendition of “Glory.”  Allen is a fire-blazing and gritty performer who has the potential to solidify herself as a groundbreaking triple-threat.

It’s interesting to see the contrasts of Pippin’s character journey and how he goes from the shifts in dynamics of humility, honesty, integrity, and ethics, to focusing on himself and the joys and fruits of life.  At one point in his quest for his search in finding himself, Pippin runs into his grandmother, Berthe, (Lucie Arnaz) who encourages him into being all about that bass as she leads the audience into an ultimate crowd-pleasing sing-a-long of “No Time at All.”  The show’s overall themes of sexual undertones and overtones, choreographed by Chet Walker in the style of Bob Fosse, are highlighted tastefully in acrobatic cirque –du-soleil choreographed movements on the stage and trapeze.   Another Oedipus Complex theme of sexual innuendos existing between the queen Fastrada, (Sabrina Harper) and her son, Lewis, (Callan Bergmann) are gently highlighted throughout the number “Spread a Little Sunshine,” later on leading into the end of the act in a spine chilling reigning of Pippin as the new king after his father’s death led by the entire ensemble’s power in “Morning Glow.”

After several eye-popping acrobatic opening illusions and tricks at the top of act 2, followed by a perfectly in-sync number of “On the Right Track,” harmonized in pristine vocal and choreographed balance between the Leading Player and Pippin, Catherine, (Pippin’s love interest played by Kristine Reese) is introduced by an extraordinary fanfare led by the Leading Player.  The comedically, yet practical and modest, ordinary woman trips and falls over her primary introductory entrance as she initially takes Pippin in as her tenant in the musical number, “Kind of Woman.”  Throughout her solo she describes herself as an ordinary woman, however her belting voice is everything extraordinary!

Overall, what lifestyle does Pippin end up choosing?  What are some core values and deeply held cherished beliefs Pippin ends up following as his ultimate life path and destination?  Should he ultimately follow a life of practicality and simplicity with the woman he loves?  Or does he follow fame, glitz, glamour, in the name of power and glory?  The Broadway National Tour of Pippin has opened my ways of thinking about the production to many new dimensions provided its several interesting fresh takes.  With the number of instrumentalists identical to the number of instrumentalists in the NYC production, producing a powerful, crisp and tight, enriched sound, while playing Larry Hochman’s orchestrations, this is one production not to be missed.

Running Times: Two hours and 35 minutes including a 15 min intermission.

Pippin runs through January 4th 2015 at the National Theatre, which is located on 1321 Pennsylvania Ave. NW Washington, DC 20004. For tickets, click here.