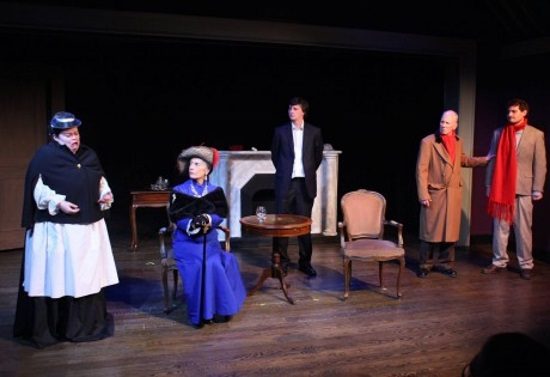 True to fashion, The Montgomery Playhouse Production of Sherlock Holmes and the Christmas Goose delivered a well-executed performance enjoyed by audience members of all ages.   The story takes place in London, England in the late 1800s.  A restless Sherlock Holmes is hot on the trail of a “serial goose killer” with more than just the hope of scoring a plump goose for Christmas dinner.  Holmes suspects the serial goose killer is also responsible for the theft of the famous “Blue Diamond” owned by the wealthy Countess of Mordrid.  The story is filled with comedy, mystery and a little bit of Old English charm performed by an undeniably talented cast.

It’s elementary my friends, ‘Sherlock Holmes and the Christmas Goose’ is a show worth seeing.

The costumes are remarkable reflecting a real glimpse into the fashion of the time.  Award winning costume designer Maggie Skekel could not have chosen costumes more appropriate for each of the select characters.   Of equal importance is the set design created by David Jones.  The fireplace and liquor table in Holmes’ flat help create the atmosphere of a stuffy English home lacking any kind of color or flair what so ever, but bursting at the seams with a dull proper British style.  In addition Jones masterfully uses other props and set pieces creating an environment complimenting of the actors and actresses.

The cast was sensational.  They have an awesome energy and cohesiveness that translates into a captivating performance.  The entire cast has very realistic sounding British accents.  In fact, I can’t be so sure some of them are not actually from England.  That is how “British” they sound.  All of the cast members have great projection and clarity when delivering their lines.

Doctor Watson, played by Paul Noga, is an exceptional narrator and is very engaging with the audience.    When he directs rhetorical questions at the audience one feels compelled to answer.  He makes the audience feel like part of the show.   Matt Sims does a phenomenal job portraying the ever observing less than optimistic British icon that is Sherlock Holmes.  Holmes and Watson are a great duo offering both philosophical insight into human nature as well as comic relief at its best.  Mrs. Hudson, Holmes’ landlord, played by Barbara Turner is hysterical in her attempts to “stand her ground” against the demanding Holmes.

The Countess of Mordrid, played by Laura Cox, is entertaining in her role as the glamorous yet unlucky millionaire seeking the services of Mr. Holmes with hopes of finding her lost “Blue Diamond.”  Playing opposite of the countess is her maid Betsy played by Anne Vandercook.  A lady of few words Vandercook dominates and owns her part as the mal treated timid maid.  Truly a talented actress, Vandercook says so much using body language and facial expressions to convey what words can’t quite express.

It’s elementary my friends, Sherlock Holmes and the Christmas Goose is a show worth seeing.  The story is one of mystery, comedy and inspiration during the Christmas season.

Running Time:  About an hour and a half with a 15 minute intermission.