Theatre Review: ‘The Nutcracker’ at Round House Theatre 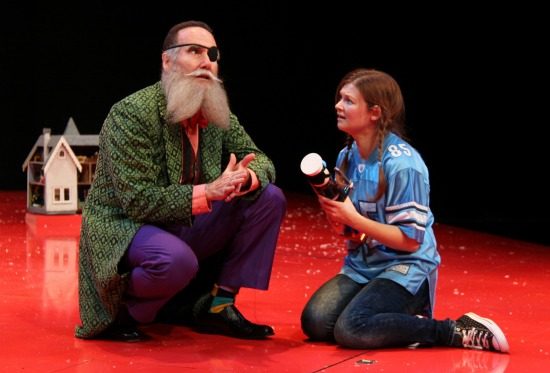 It’s the music and the dancing of The Nutcracker that have made it an annual tradition in cities across America for half a century.

The new production of The Nutcracker at the Round House Theatre has neither of those things though.

Instead, it claims to be sticking with the always nebulous story by E.T.A. Hoffman that began it all, involving a party, an odd uncle, a magical wooden soldier and rats.

And yet, the modern adaptation imported from Chicago is no more reverent to his story than the ballets have been.

And the tale that usually starts with little Clara and her bratty brother Fritz awaiting a party actually begins with Fritz having been killed in the war. The shock casts a pall on Clara’s family of course, where Christmas is all but canceled, with the holiday wreath replaced by one for mourning, but it also sends Clara into a kind of mental tailspin.

A little girl talking to her toys may be charming at some age, but it’s not immediately clear how old the girl is supposed to be in the adaptation by Tommy Rapley, Jake Minton, Phillip Klapperich and Kevin O’Donnell.

…the more wacky things get on stage, the odder everything becomes.

The actress Lauren Williams plays young well and has a voice and stage presence like Kristen Chenoweth but she’s also old enough to still be a twin of soldier-aged Fritz if that’s the case. And if her best friends are toys at that age, it’s more a matter of concern than charm.

We aren’t told until act two that she’s still in school (or at least hasn’t attended her high school prom yet). But by then her mom is already questioning her sanity.

So here’s what faces the little girls in their fine dresses and their doting grandmothers who will attend this “Nutcracker” expecting dance, music and cookies: death, madness and rats that just won’t go away.

And as if there isn’t already some dark psychological underpinnings to the work, there’s this: Two of the three rats, the ones with unexplained Cockney accents, also play the parents. No wonder Clara’s going off the deep end.

There are splendid things about the production directed by Joe Calarco – mostly the stark, functional lacquered red floor set by James Kronzer with its trap doors and iconic totems of door, tree and dollhouse. Also the distinct lighting of Deniel MacLean Wagner that sets things spinning and the fine costumes of Helen Huang, who gives the right touches to the humans, life-sized dolls and rats. The Drosselmeyer finery itself deserves an award.

But nobody should think, despite its billing as a “new holiday musical,” that it’s even very musical. There are a few songs by Kevin O’Donnell and Jake Minton that evaporate immediately after they’re sung. Hearing the Tchaikovsky cues at the end of the acts only makes one long for an alternate Nutcracker choice.

The problem with starting an ostensibly family holiday play with a crushing death is that it’s tough to recover from and the more wacky things get on stage the odder everything becomes.

Mostly, Clara’s toys become life-sized confidants. Will Gartshore plays a sock monkey who has a French accent for some reason (he’s wearing a beret). Erin Weaver is a dolly whose pull-string declarations quickly wear out their welcome and Evan Casey is a robot who, despite Clara imitating him as a monotone machine, chooses to talk more like Paul Lynde when human-sized.

Despite all this, Vincent Kempski does great work as Fritz, the soldier who is now trapped in the wooden Nutcracker, lending some dignity and tenderness while he drags his stiff legs around in a performance that may remind you of Steve Carell at his best.

And Lawrence Redmond is suitably commanding every time he is on stage as Drosselmeyer, aided of course by the clothes and the foot-long, parted beard.

It’s a stretch for Mitchell Hébert and Sherri L. Edelen to play both the intense parents as well as the much broader rats. Hébert even comes back a third time to operate a Teddy Bear marionette that seems very much out of place. It seems strange to me to have a puppet suddenly where everyone else is full-sized (except for the giant-sized rat sure to scare the youngest audience members brought by mistake).

If it’s not really for kids, you can’t say this “Nutcracker” was intended for grownups either. And the family aspects dissipates every time they have an inappropriate double entendre like…

Despite every good effort by actors on stage, this “Nutcracker,” rewritten two or three times in Chicago, seems patched together and at cross purposes for an audience they have yet to clearly identify.

It ultimately makes you long for sugarplum fairies next time out.

Advisory: A couple of vulgar jokes about nuts and a continuing intensity about death may make it unsuitable for those under 10. The theater has a whole web page about whether kids might be ready for that can be found here.