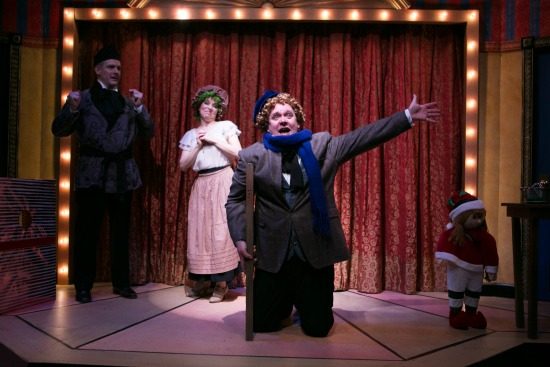 Its back, the holiday gift that keeps on retelling. it is carefully packed away every year, then taken out and freshened up by MetrosStage Theatre, with a few extra songs, a schmaltzy move here or there. Yes, its Broadway Christmas Carol, a retelling of the classic Charles Dickens story in an entirely vaudevillian twist. Classic Broadway show tunes are turned upside down in clever parodies and are interspersed into the show, from Annie to Thoroughly Modern Millie, and many in between–offering musical-lovers a delicious buffet of mixed genre entertainment.

Created by local artist and director Kath Feininger more than 16 years ago, the show is a bit of a regional cultural phenomenon has found a nice home at the cozy MetroStage.  There have been a few adjustments as the years go on—a wrinkle here, a few songs introduced, and some dropped–but the basic show has remained the same. Adding to the madcap, it is performed by only three performers, all Broadway Christmas Carol veterans. Seeing the frenetic action involved and amount of singing required makes one understand the need of actors already exposed to the material.

Our music hall talent consists of Peter Boyer as Scrooge, Michael Sharp as the Man Who Isn’t Scrooge, and Tracey Stephens as Woman Who Isn’t Scrooge.  Rounding out the performers is a nod to our gifted piano player and music director Howard Breitbart, who jumps in when needed to be the ‘face’ and voice of the Phantom.  He is situated right onstage, smoothly performing parts of 35 songs. Yes, I counted.

This is a show that the word zany was created for.

Boyer’s Scrooge, was played with a nice light touch, almost a daft sense of whimsy about him. He was comfortable in the dramatic pacing and in the frenzied action that broke out everywhere. His soaring “Take Him Home” (Les Miserables) showcased his vocal range.  His singing transitioned appropriately between earnest, sarcastic and sensitive in a soft tenor.

Sharp, who also directed, played the litany of other men’s roles. Also with impressive vocal range, he stood out in many scenes with a deft glance.  His version of Tiny Tim, singing “I’ll Walk Again … “Tomorrow,”(Annie) at once heartfelt, and then manic, reminiscent of the doll in “Chucky” was priceless.

Stephens, our every girl, was simply amazing, providing the energy and vocal power for the show. A veteran of impersonation and physical comedy from years with Capital Steps, she flowed with the other actors in stagecraft, nuance, costume changes – she did it all. Vocalization, accents, dance routines—a joy to watch, from her vamping Ghost singing “Turn Back, Oh Man”(Godspell) to a street wench singing “Wouldn’t it Be Miserly” (Oliver!)

The action works so well because it is so intensely focused. There are many aha! moments—then just as quickly you are on to another theme. There were very few bumps in the road, given the breakneck pace of it all.

Personal favorites were “I’m in the Money” (42nd Street) ‘Touch Me” (Cats) the aforementioned ‘Tomorrow” and the showstopping “Ebenezer” (from Oklahoma!) with the just the right syllables).

And just to keep us on our toes, Act II brought us a nice change of pace—puppets by the names Want and Ignorance, from Dickens ghosts. How else to sneak in the song “It Sucks to be Thee” from the obscure Avenue Q?

Producer and Artistic Director Carolyn Griffin clearly has a soft spot for this show and the good cheer it receives. If you are a purist, and just want to hear an entire Broadway song, you might get frustrated. But playing name that tune got too complicated. This is a show that the word zany was created for.

In the end, the show succeeds because it never ever takes itself seriously. And if you are taking yourself THAT seriously during yuletide season, either you shouldn’t be here – or perhaps you need to be here!

Yes, its back, this nutty seasonal chestnut–slightly revamped, and like a fruitcake, it shows up this time of year and balances out all the other Christmas festivities.

Running Time: 1 hour and 40 minutes with an intermission.