Concert Review: ‘New Year’s Eve at the Kennedy Center’ with Ozomatli and Members of the NSO, Steven Reineke Conductor 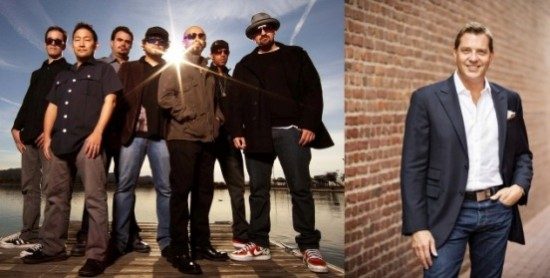 New Year’s Eve at the Kennedy Center always has something for everyone in terms of music but this year’s National Symphony Orchestra concert was something completely different from what most audiences would have expected.

…awe inspiring and was not like anything I had seen in the Concert Hall before.

Picture if you will, Maestro Steven Reineke taking the podium in the Concert Hall and starting us off with a little Latin standard called “Tico Tico.” He then announced that the concert was going to be a Latin dance party which I think shocked some audience members that are use to Viennese waltzes on NYE. There shouldn’t have been any cause for alarm because the featured act was the multi Grammy and Latin Grammy winning band Ozomatli. To say they heated up the venue would be an understatement.

The group is coming up on twenty years together and I can see why they have been so successful. High energy songs like “La Gallina” and “Como Ves” got even the most discerning concertgoer up on their feet.

With an instrumentation that featured sax, electric reeds, timbales and other Latin percussion, trumpet, drums, bass and guitar the six member ensemble kicked things up a notch with “Saturday Night,”  While the group played mostly up tempo songs, one of the best of the night was a piece written as an anthem against violence called “Believe.”

There is something to be said for 2,400 plus people feeling as if they are part of the show and Ozimatli made sure they were in two ways. First was having a little girl from the front row, who was really enjoying herself, up on stage to dance with the band. The second way was literally having the band take the music to the people with the group doing a processional around the entire theatre and inviting audience to follow them around. That was something awe inspiring and was not like anything I had seen in the Concert Hall before.

Maestro Steven Reineke looked like he was having the time of his life conducting the NSO through the Latin infused charts and even managed to get “Danzón No. 2” by Arturo Márquez on the program which gave the audience their classical fix for the night.

Overall, it was a fantastic way to end 2014.  I was introduced to a group I was not familiar with while listening to, as I’ve said before, one of the top orchestras in the world with Steven Reineke at the helm. Ozomatli is one group I urge you all to go listen to next time they are in this area. You just might find yourself dancing in the aisles and if music is a form of self expression, then go for it and enjoy. Happy 2015 everyone!!