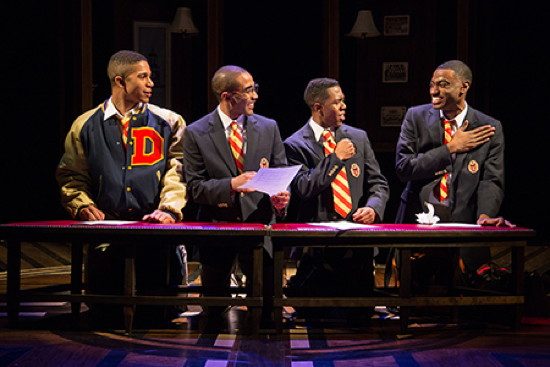 When Tarell Alvin McCraney portrayed his work representing young black men preparing to become leaders in their community, the 34-year-old playwright, (who was chosen last year as a MacArthur Fellow, otherwise known as Genius Grant) was inspired by many other enlightened individuals of whom he called, “spirits of generosity,” including teachers who provided him opportunities to participate in the arts as he grew up in Miami.

According to McCraney, Choir Boy, currently performing at Studio Theatre’s Metheny Theatre in Washington, D.C., portrays a group of young African-American men in prep school set on a journey towards leadership within their community, and although financial gains have been set for the school’s funding in the choir, so has a type of set long-held beliefs and principles for the school. The pressure and the stakes become high as the extraordinarily talented, gifted, and driven student Pharus Jonathan Young, (Jelani Alladin) who is scholarly well beyond his years is told to ignore a gay slur and fulfill his role as the gospel choir’s leader.

Inspired by the dynamic structure of African-American young men growing into manhood in today’s society, McCraney was fascinated in the ways how people who are constantly told to remember they’re a part of a particular group but also asked to be individuals by raising the following viewpoints: Are we allowing their individuality? Are we giving it room to breathe and grow? Or are we causing stagnation? Are we as truly understanding, supporting, and empathizing young peoples needs allowing them the space and freedom to be children? Or are we overwhelming them with restrictions and guidelines to follow, placing them with many responsibilities? How do we make and establish strong connections and pass these onto tomorrow’s generations of leaders?

If you’re in the mood to see a play filled with some hearty gospel soulful a cappella music, Choir Boy is the show to see.

I applaud director Kent Gash for making a wise decision in casting a solid ensemble of actor/singers for the production and Darius Smith assembles a strong, tight blend of soulful harmonized voices, producing a sweet, rich, and dynamic fusion of lively spiritual gospel, pop, and bluesy sounds. Smith knows exactly how to bring out an authentic a cappella rendition of New Edition’s, “Can You Stand the Rain,” with the group as their bona fide vibes are expressed through beat-boxing, stomping and clapping. Marty Austin Lamar has a spine-chilling solo moment showcasing his deep, vibrant, powerful sound.

Alladin drives several focused moments throughout the show including an intense speech of his during a creative writing class assignment describing spiritual beliefs through praise and love as a way of true life’s freedom of love, liberty, and rebellion. Alladin’s passionate truth spreads fresh spirit into a whole new take on a spiritual way of life’s meaning. A tender, endearing connection is established between Pharus and his roommate Anthony Justin, “A.J.” James, (Jaysen Wright) from the moment the two are introduced in the story. Alladin and Wright build and establish a warm and lasting foundation between the two characters as Anthony initially accepts Pharus for his individuality and sees beyond past his insecurities.

Special mention is given to the set designer, (Jason Sherwood) and lighting designer, (Dawn Chiang) for an incredibly exquisite and tastefully crafted set and light design complimenting the actors onstage especially during a complicated full-blown nude shower scene. It takes an entire team, including the music direction, and stage direction to add to the “village” of team members to beautifully display an almost innocent and angelic portrait of young gentlemen reverting back to their childhoods as they sing about, “my mother’s voice calling me as a child,” and the team carried through with this vision perfectly. If you’re in the mood to see a play filled with some hearty gospel soulful a cappella music, Choir Boy is the show to see.

As McCraney wrote Choir Boy, he described Pharus as “amazing. Those people like Pharus who can, in the middle of a place that is basically telling them to be something else (and yet) they remain truly themselves and somehow try to flourish within that-that’s just, I think, spectacular. And I also love people who have generosity for others who may not be being generous to them. I think that’s fascinating. To be able to somehow find empathy for people who are oppressing you, or being mean to you, I think that level of generosity is saintly. …Of course he’s not perfect…but at the same time…still in his situation most of us would sort of bristle and either shut down or try to remove ourselves from, he remains. And also finds kindness and/or openhandedness and in some cases love from people who are hurting him. And I think that is noble. That’s inspiring. That is something to be protected, something to be cherished and examined in a closer more intimate way.”

Running Time: Approximately 1 hour and 45 minutes with no intermission.