Theatre Review: ‘In Love and Warcraft’ by No Rules Theatre Company at Signature Theatre 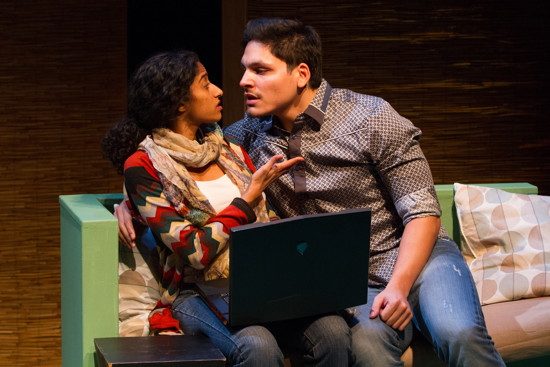 A Washington DC area premiere, In Love and Warcraft by Madhuri Shekar is an engaging, well-constructed, satiric romantic comedy skillfully acted and briskly staged by the No Rules Theatre Company under Joshua Morgan’s able direction. While an endearing, cute love story, at the same time the play mocks the artificial, unromantic worlds of the emotionally-vapid denizens of hooking up and the escapist glued-to-the-screen addicts of computer games. The game here is World of Warcraft, a current global sensation with some ten million players in which one becomes a glamorous, powerful avatar and duels with monsters. Engrossing, it sucks people in.

Heading the cast is Anu Yadav as the rather geeky Evie, an English Lit major who is never seen cracking a book but is an ace writer of love letters, Facebook posts, Twitter posts, piped-in declarations of love and diplomatic apologies for those having problems in relationships. For this, she is paid and is quite successful helping couples stay together. But while she is accomplished at the language of love, she is emotionally unable to engage fully in romance and is a shy, frightened virgin while fellow co-eds all around her are copulating like super rabbits. Nonetheless, and from which she derives her self-worth and thrill in life, she is an expert siren warrior of Warcraft, none other than the amazing, deadly and famous Princess Azareth. Wielding a long wicked sword while adorned in a racy costume! But this of course is all artificial and computer enhanced. Yadav’s portrayal is appealing and engaging, her soulful expressive eyes artfully revealing Evie’s yearnings, pangs and vulnerabilities. Her’s is a stellar performance.

Evie has a boyfriend of sorts, a loudmouthed vulgar lout named Ryan, who is a fellow team member of Warcraft. This dolt who lurks in his parents’ basement is played with great energy and obnoxious irksomeness by the very brave David Johnson. But there is no romance and it’s going nowhere. They’ve never even seen each other IRL (“in real life” in computer geek shorthand).

Complicating Evie’s life is her flouncing, voluptuous, nymphomanical roommate Kitty who is never content unless engaged in sexual relations. Played to the hilt by Dani Stoller, she is an outrageous, outlandish comic riot who draws chuckles simply walking onto the stage. He counsels Evie to think of sexual relations as “working out” while avoiding emotional attachment.

What great advice for the young! What a world!

Then into her life walks the handsome Raul, played with steady masculine calmness and sensitivity by AJ Melendez. He needs a love letter written to his wildcat, ill-tempered girlfriend, and Evie, smitten at the mere sight of Raul’s gentle yet powerful eyes, writes a torrent of romantic effusions. Raul is charmed, no longer deluded by his vexacious girlfriend no matter how rapturously sexy. He doesn’t give the letter to her, and now knowing the true words of love, he returns to ask Evie out to dinner. With great clumsiness, shyness and fear, she accepts. They promptly fall in love and spend their evenings cuddling. Raul needs more, but that frightens Evie.

What’s a poor girl to do!

Attempts to cope ensue, with Evie setting off to the hairdresser to enhance herself. This hairdresser Nathan is a flamboyant gay played with over-the-top verve by Jamie Smithson. A heroic performance. He also plays a gamer, a Lakers fan and an old fogey in a movie audience, each character distinct, unrecognizable from his previous character and very funny. A bravo performance.

With him in the movie theater is a lady old fogey played by Kaitlin Raine Kemp. In the seats in front of them, Evie and Raul are arguing about their sexual predicament, and she exclaims with perfect rauciousness: “What’s the matter with you kids!” She also plays other distinct bit parts, most amusingly as a gynecologist with a languorous Southern drawl who Evie visits for fear there’s something wrong with her.

Kaitlin Raine Kemp also portrays a Christian named Charlotte who needs words from Evie for her wedding vows. In the process Charlotte explains her Christian concept, essentially the morale of the play, that the best relations comes with marriage to a patient, kind man. The “patient, kind” part clicks for Evie and she’s at last ready for love. After a climactic scene in Warcraft reality where she and Raul now avatars prance and whirl their swords defeating monsters, Evie announces she’s ready… to get intimate. As the lights dim, they are a contented couple and one gets the feeling, because Raul’s no cad, that a happy marriage is not too, too far off.

Three cheers for Madhuri Shekar who strikes an entertaining blow to the culture of soulless hook-ups and barbaric vulgarity.

Running Time: One hour thirty minutes with no intermission.

In Love and Warcraft runs through January 25, 2015 at Signature Theatre, Arlington VA. With a matinee and evening performance Saturdays and a matinee Sunday. Tickets can be purchased calling (703) 820-9771 or online.