Theatre Review: ‘In Praise of Love’ at the Washington Stage Guild 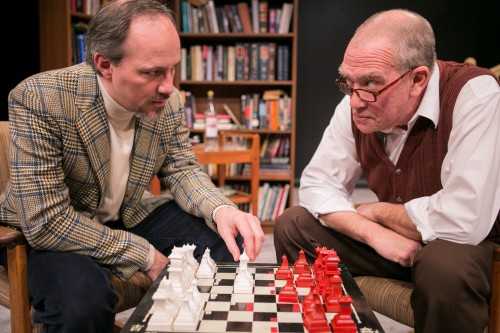 Steven Carpenter (Mark) and Conrad Feininger (Sebastian) face off over a chess set in the Washington Stage Guild’s production of “In Praise of Love.”

According to the Washington Stage Guild, their production of In Praise of Love is the first Terence Rattigan play produced in Washington, DC since In Praise of Love premiered at the Kennedy Center in the 1970s. Based loosely on the brief marriage of Rex Harrison and Kay Kendall (which ended in her death in 1959), Rattigan’s penultimate play is a marvel of emotional subtlety, drama, and clever writing.

Rattigan’s words and the deft hand of director Laura Giannarelli make this play a riveting look into what the nature of love really is.

In Praise of Love examines the life of the Cutwell family–Lydia (Julie-Ann Elliott), the bright and bubbly (and ailing) former Estonian resistance member; her crotchety literary critic husband Sebastian (Conrad Feininger); their idealistic son Joey (Christopher Herring); and their multimillionaire novelist friend Mark (Steven Carpenter). Called to the small Islington flat from Hong Kong at Lydia’s insistence, Mark is the only one who bears witness to the total emotional anarchy of the Cutwell household–Lydia is dying, and has determined that her husband, barely capable of tying his own shoes, and her son, merely twenty, shall never know. Mark is left as both Lydia and Sebastian’s sole confidant.

Considering that this play is over forty years old, and comes from a playwright that was frequently criticized for being somewhat “out of touch” circa 1956, it holds up remarkably well. It covers an emotional landscape rife with obstacles and subterfuge, repeatedly asking questions about the nature of honesty and love. Some of the political references (Sebastian’s die-hard Marxism, for instance, and Mark’s hippie-era characterization of American culture) are rather dated, and the conflict that political discussion provides seems rather stale even in the play, when contrasted with Lydia’s past as a survivor of the Nazi camps. Herring’s authentic portrayal of Joey as a youthfully earnest, but inherently naïve young man serves to underscore this point, providing stark contrast to the bitterness of Feininger’s Sebastian. Meanwhile, the tension between Carpenter and Elliott is almost tangible, and Carpenter’s opportunity to openly emote when other characters cannot is not wasted in the least.

Set designer Carl F. Gudenius and costume designer Sigrid Johannesdottir have succeeded in placing the actors directly into the 1973 world of In Praise of Love. The set, with a carpeted stage, is dominated by bookcases, 9 sets of shelves in all, while the furniture is appropriately dated–an elegant rotary phone in the corner, a turquoise loveseat, and a miniscule television set with rabbit ears atop an angular stand. The actors are costumed very precisely–Mark, as a nod to the Mod style of the 1960s, wears a white turtleneck, while Sebastian adorns himself in drab sweater vests. Joey, much younger, wears bellbottoms with leather fringe.

While In Praise of Love emerged from a time long distant from our own, and from a theatrical tradition that seemed passé in 1960, Rattigan’s words and the deft hand of director Laura Giannarelli make this play a riveting look into what the nature of love really is. Is honesty the most important thing in a relationship, or is it compassion? The Washington Stage Guild’s production is a well-constructed effort to answer this question.

In Praise of Love, produced by the Washington Stage Guild, is playing at the Undercroft Theater, 900 Massachusetts Avenue NW, Washington, DC through January 25, 2015. More information can be found here.