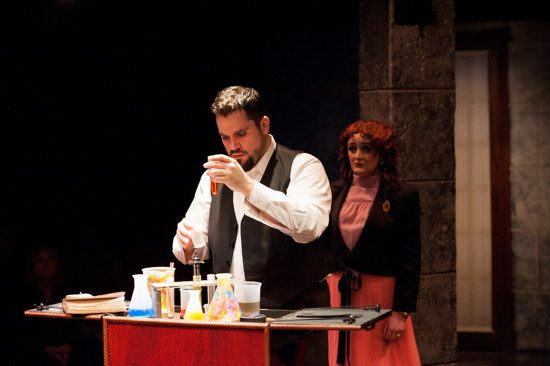 Spotlighters Theatre presents Jekyll & Hyde, a musical based on one of the oldest “horror” stories, written in 1886 by Robert Louis Stevenson. The musical, with book and lyrics by Leslie Bercusse and music by Frank Wildhorn, premiered on Broadway at the Plymouth Theatre on April 28, 1997. After an almost-four-year run, it became the longest-running show in the history of the Plymouth Theatre, closing after 1,543 regular performances on January 7, 2001.

Stevenson wrote about a man, Dr. Henry Jekyll, curious about human nature. He wondered if people are inherently good or evil and, if it were possible to remove all evil from man, would the world be a better place.

Spotlighters’ ‘Jekyll & Hyde’ is sure to please, entertain and at times scare you…

Dr. Jekyll, driven by his father’s death from mental illness, wants to prove this by developing a formula that could extract the evil. After his colleagues at the hospital laugh at his work and decide not to financially back his research, he becomes obsessed to prove them wrong and uses his formula on himself. This is when Dr. Jekyll violently transforms into Mr. Hyde – a man who is nothing but pure “evil.” Hyde wants nothing but revenge on his colleagues. So when Dr. Jekyll is Mr. Hyde, neither any moral code nor the two women who love him can stop his lustful murdering spree.

In the Spotlighters’ musical production, directed by Fuzz Roark with musical director Michael Tan, tension, pride, lust, goodness and love are played out in song. All the lead actors voice’s are robust enough to convey all of these strong emotions.

Ryan Wagner plays Dr. Henry Jekyll and also Mr. Hyde exceptionally well. Each distinct personality is portrayed so seamlessly and so believably that I could feel the change in him as well as see it. Wagner’s voice is strong and clear, and it never wavered – unless he wanted it to. His voice is particularly showcased in the song “The Confrontation,” where the battle for domination between Jekyll and Hyde plays out. Wagner is a natural on stage, and I look forward to seeing him in other productions.

One of the women who loves Dr. Jekyll is his upper-class fiancée, Emma Carew, played beautifully by Patricia Hengen. With a face like a classic Hollywood film star and a voice to match, she is a pleasure to watch and listen to interacting with Wagner.

Another highlight from the show is when Emma Carew sings a duet with the other woman who loves Dr. Jekyll, prostitute Lucy Harris, played by the striking Renata Hammond. The song is “In His Eyes,” when they sing about loving the same man. Although they are both very different, they are also similar because of the love they have for Dr. Jekyll.

Hammond’s Lucy is sweet and still a bit naïve, although she is a prostitute. Hammond does a great job of expressing this to the audience, and her singing voice is strong and melodic, especially in “Someone Like You” and “A New Life.”

The entire cast’s passion for the show is easily conveyed, and I enjoyed watching them interact with each other and their enthusiasm. The live band, consisting of Michael Tan, Greg Bell and William Georg, played wonderfully and were the perfect volume for such an intimate theatre.

Spotlighters’ Jekyll & Hyde is sure to please, entertain and at times scare you, but isn’t that what good theatre is all about!

Running Time: Approximately 2 hours and 40 minutes with one 15-minute intermission.