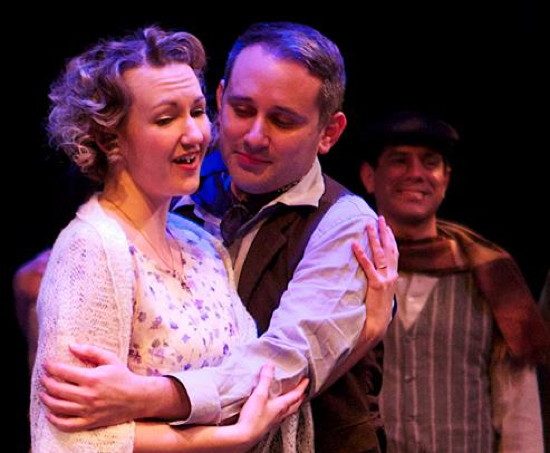 CarrieAnne Winter, Joe Haughton and Eduardo Castro. Photo provided by The In Series.

The InSeries’ Artistic Director Carla Hubner noted at the beginning of Saturday night’s performance of Vincenzo Bellini’s La Sonnambula that it was a “bigger piece than we usually do…in a smaller space.” While opera is typically performed in large opera houses, La Sonnambula is at the Source Theater, a black box with limited seating. This close space offers both advantages and challenges to the production of this piece.

La Sonnambula tells the story of a small village in the Italian countryside, where Amina (CarrieAnne Winter) is about to marry Elvino (Joe Haughton). The close-knit villagers are haunted by a frightening nocturnal specter, but invite visiting Rodolfo (Brody DelBeccaro) to spend the night instead of continuing on his journey. When Amina is found in Rodolfo’s bed the next morning, Elvino accuses her of adultery and decides to marry Lisa (Kimberly Christie) instead, but cannot shake the love he feels for Amina.

The InSeries’ production of La Sonnambula is lively, engaging, and unique…

The InSeries has done a good job making a small production feel like a big production. There is a (small) live orchestra, hidden behind a screen at the back of the stage, which provides live accompaniment to the singers. While lacking the grandeur of an opera house set, the screen projects a scene of rolling hills consistent with an idyllic village in the Italian countryside, and several panels onstage depict the same thing. The singers navigate the space with practiced ease, even clambering over the stone wall at the front of the stage.

The chief advantage of the (comparatively) small space is that the expressions on the singers’ faces are clearly visible. The breadth and expression of emotion in La Sonnambula is astonishing; Kimberly Christie especially is fully present and reactive in every scene she is in. The comedic elements of this opera are easier to convey and understand in the black box than they would be in a large production–comedic operas are generally absurd, but this one especially so, with a number of contrived coincidences and a plot oriented around sleepwalking.

The chief disadvantage of the small space of the Source Theater is that the sound cannot be distributed very widely. While this would ordinarily be an advantage–especially in productions where no one is miked–the force of CarrieAnne Winter’s high vibrato occasionally made my eardrums vibrate. While the libretto for this production has been adapted into English by director Steven Scott Mazzola, the close quarters, the nearness of the live music, and the power of the vocals made it frequently difficult to understand.

The InSeries’ production of La Sonnambula is lively, engaging, and unique–it is a novelty to experience the majesty of opera in the intimacy of a black box theater. It comes complete with a cast of singers that can easily rival a production in a bigger venue, and a sensibility and humor that keep it entertaining.