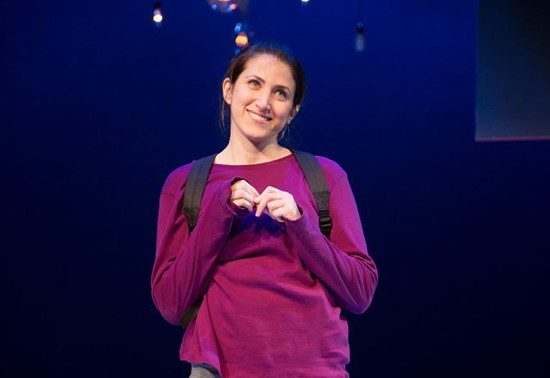 The Kennedy Center’s Family Theater presents Mockingbird a world premiere to the Kennedy Center. Hailed as “extraordinary… [a] moving and insightful masterpiece” by Publishers Weekly, Kathryn Erskine’s 2010 National Book Award–winning young adult novel has been adapted for the stage by Julie Jensen, a recipient of the Kennedy Center Award for New American Plays.

Kathryn Erskine, the author, was directly affected by the Virginia Tech 2007 shootings and felt it was important to show the personal toll that violence has on families with special needs children. Ms. Erskine attended the world premiere, seeming genuinely touched at the audience’s reaction to the production. This dramatic adaptation was artfully crafted for the stage by Julie Jensen, and was lovingly directed by Tracy Callahan. This moving, vibrant, and surprisingly humorous world premiere production shows how the perseverance of one girl can change a community–and how black and white can always be complemented by a kaleidoscope of colors.

Well acted and directed, it will be a performance you will talk about for years to come!

The novel, Mockingbird, is nuanced with images and references from To Kill a Mockingbird, a Pulitzer Prize winning novel by Harper Lee published in 1960 about racial intolerance, that was later made into a movie, which Caitlin and her brother, Devon, would often watch together. Devon often called Caitlin, “Scout” and Caitlin calls her father, “Atticus.” Caitlin, much like Scout, sees herself as a passive witness to the events that unfolded in her life, protected by her older brother, and admiring of him and her father. Caitlin uses the story of To Kill a Mockingbird to process her understanding of the reactions of others, and communicate with her father. Caitlin’s heartfelt drawing of the mockingbird, which represents her brother, is a constant connection onstage to the classic novel, and a reminder of the intolerance that children on the spectrum often face in their daily lives.

Caitlin, an 11-year-old on the autism spectrum, portrayed with humor, empathy and energy by Dylan Silver, used to rely on her older brother to help make sense of things. But now that he is gone, dead from a random act of mass violence, she is on her own. With the support of her guidance counselor, teacher, father, and a new young friend, Caitlin begins to understand how to get close to people again, embrace the “messiness” of emotions, and use her burgeoning artistic talents to move on. Her failure to be “normal” is met with school friends who tease her and teachers who encourages her to use techniques and memorized tricks to navigate the emotional world where Caitlin is encouraged to conform. Words and expression are difficult for Caitlin, but with training, she comes to understand and behave appropriately to the emotions of others, which are beyond her ability to feel herself.

Helping Caitlin make friends and interact with others is the focus of every adult. Her teacher, Mrs. Johnson, firmly and commandingly played by Susan Lynskey, tries to help Caitlin with the day to day challenge of making friends, and learning to be part of a group. The guidance counselor, Mrs. Brook, played elegantly and firmly by Gabriela Fernandez-Coffey, reminds Caitlin that she needs to pay attention to invisible clues of other people’s moods and interpret words that appear to be confusing. Her Dad, played by veteran actor, Mahoud Ebrahimzadeh, is going through his own pain of losing a child, coupled with the often inappropriateness of Caitlin’s use of words, bringing her father additional pain. It is interesting to note that despite Caitlin’s avoidance of physical touch, she allows her dad to comfort her, his tenderness, sometimes hidden by his short-tempered handling of his confused daughter, is genuine and beautifully portrayed. The sweetest moments are portrayed between Caitlin and the 6 foot tall, baseball cap wearing, 5 year old, Aaron Bliden who plays Michael. Forced to attend the recess of younger children, Caitlin finally starts to make a friend with Michael. Someone who likes her for who she is, understands her and the audience sees that the efforts of the staff are indeed working as Caitlin seems happier having friends.

Set designer, Misha Kachman’s, use of a geometric staging and a giant blackboard magnify what Caitlin is thinking or what she is drawing, allowing others to see how her limitations affect her ability to “just act normally.” Minimal props make for minimal distraction for the theatergoers. Having 30 year olds playing 5-11 year olds makes for a creative conundrum, which is dealt with finesse by the costume designer, Deb Sivigny. She shows cohesive simplicity along with the necessity for a quick clothing change for the rest of the cast, somehow it just works. Many know now that people on the autism spectrum are sensitive to light and sound. The light design, created by Andrew Cissna and the sound designer Christopher Baine join forces to highlight the contrast of the world Caitlin would like to live in, soft lighting, and rhythmically consistent music, with the bright and loud world in which she is forced to live. Slamming of brightly colored lockers, which interchange as doors and walls, the audience begins to see the world through Caitlin’s eyes.

So whether you are a caregiver, friend, family, on the spectrum yourself, or anyone curious about autism, this is a must see! Well acted and directed, it will be a performance you will talk about for years to come!

Running Time: 65 minutes, with no intermission.