Theatre Review: ‘One Night in Miami’ at Center Stage 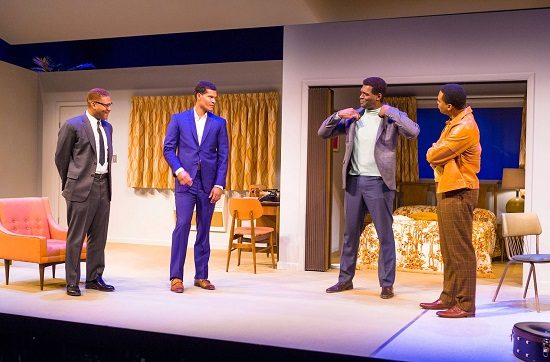 What perfect timing for Center Stage to present Kemp Powers’ outstanding play One Night in Miami!  The fictional story of four African-American icons who were also friends—Cassius Clay, Malcolm X, Jim Brown and Sam Cooke—who gathered in a Miami hotel on February 25, 1964, the night of Clay’s upset win over heavyweight boxing champ Sonny Liston that took place during the height of the civil rights struggle.

We are approaching Black History Month; we celebrated Martin Luther King, Jr.’s birthday; and we’re about to commemorate the 50thanniversary of “Bloody Sunday” in Selma as well as the passage of the Civil Rights Act.  But where the past is so often prologue, the country is still living under the shadow of racial tensions ignited by the killings of Trayvon Martin, Michael Brown and Eric Garner—developments not lost on Director Kwame Kwei-Armah who superbly helms Powers’ compelling work.

This play is a knockout that clearly should not be missed.

The civil rights movement formed the backdrop for the play, which is making its East Coast debut.  While the plot constitutes Powers’ best educated guess as to how the main characters interacted in that small room in the Hampton House Hotel, the fact is the four did get together there after the bout.  It was probably the last time they all met at the same time; Cooke and Malcolm X were killed a year later.

The group had not planned to party like it’s 1964 to celebrate the victory since nobody besides Clay himself expected the challenger to unseat the defending champ.  Instead, they spooned down some vanilla ice cream and each offered a poignant glimpse into the state of the U.S. civil rights movement. Through the discussions and exchanges, the men were developing a new awareness of each other’s persona and themselves by sharing heretofore private thoughts, criticisms, fears and dreams.

Under Mr. Kwei-Armah’s direction, the play’s fast-paced action and snappy and often profane dialogue that included a solid dose of well-timed humor was carried out expertly by the four men playing the principal roles.  As the actors performed, they moved with determined purpose about the stage that consisted of a 1960s-era hotel room authentically designed by Brenda Davis.  The set was also equipped with large projection screens at the sides and above the room to display clips and stills of that era prior to the play and at the end.

Typically, while one actor stood up to speak, another sat on the edge of the bed, then another would rise up and another would sit on another chair, or another would leave the room, and so on, all the while moving about like the fighter in a ring warily sizing up his opponent during the frequent verbal sparring.

Sullivan Jones, as Cassius Clay before changing his name to Muhammad Ali, ably captured Clay’s famous brashness, boasting that he is the greatest and asking why is he so pretty.  Mr. Jones conveys Clay’s uncertainty as to his newly found celebrity and even more so, his doubts about joining the Nation of Islam the next day despite his outward bravado.

Malcolm, played extremely well by Tory Andrus, was the most serious member of the group.  Dressed in Nation of Islam garb with its signature dark suit, white shirt and tie, Malcolm demonstrates the strongest will to fight racial injustice.  He is offended when black achievers do not take a more active stand in the civil rights fight. Nevertheless, he and the Nation are about to part ways for an unspecified reason, and he admits his fears about the consequences.

Playing Jim Brown, the Cleveland Browns superstar running back, is Esau Pritchett.  Brown’s view of racism is that condescending liberals are worse than the overt racists.  His character provided well-placed humor during the thicket of serious conversation.

After Malcolm and Sam Cooke concluded an intensely dramatic exchange that ended up with Malcolm storming out of the room, Brown chimed in, “Well, that was awkward” to much laughter from the audience.  He also explained why he couldn’t be a Muslim: “pork chops and white women.”  The obviously athletic looking Mr. Pritchett played the part to the hilt, delivering his comedic lines with outstanding timing.

As singer-songwriter and record producer Sam Cooke, Grasan Kingsberry’s performance was also exceptional.  He and Malcolm provided the most drama within the group as the latter was put off by Sam’s ostensible lack of activism in the movement and mocked his music that he believes is geared towards mainstream America.

Given the opportunity to perform a few of Cooke’s songs, Mr. Kingsberry delivered in show-stopping fashion with a spot-on take on Cooke’s sensual voice.  This was especially true in the iconic civil rights anthem, “Change is Gonna Come” leading to the climactic ending.

Rounding out the cast are Royce Johnson as Kareem and Genesis Oliver as Jamaal—Malcolm’s steadfast bodyguards who frequently entered and exited the room at various points throughout.

All actors in the play are making their Center Stage debut and performed brilliantly. Alex Koch did a fine job with the projections as did Colin D. Young with the lighting design.  Costume Designer Clint Ramos effectively fit the cast in 1960’s garb.

One Night in Miami takes you back to a time when racial strife was hitting its apex.  Kemp Powers penned a powerful script—historical yet satirical—that exposes the strengths and weaknesses of all four of these icons.  You can feel the significance of this history throughout because of Mr. Kwei-Armah’s direction and the superb performances by the cast.  This play is a knockout that clearly should not be missed.

Advisory: The play contains profanity and is not suitable for children.