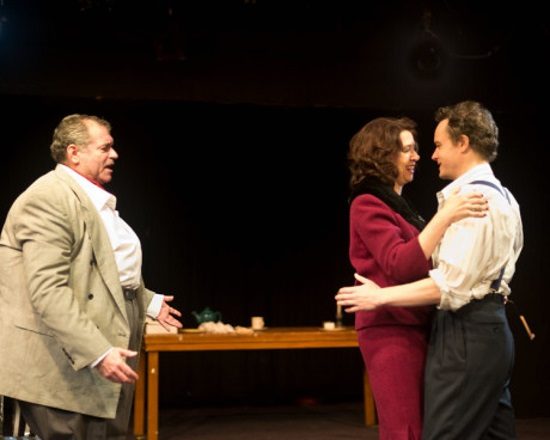 Silver Spring Stage has taken on a huge challenge in presenting Orson’s Shadow, a play that moves from the heights of humor to the depths of despair and back and centers on world-famous personalities. Not to mention the accents involved—both British and Irish—never an easy feat to carry off.

To a large extent, under the direction of Seth Ghitelman, the theater and an appealing cast have met the challenge.

Orson’s Shadow is a fictionalized account by playwright-director Austin Pendleton of a 1960 production in London, the first in English, of Ionesco’s absurdist play Rhinoceros. Directed by Orson Welles and starring Laurence Olivier, the production marked the only time the two-theatrical/cinematic giants worked together. Although it was not a success, the fact that it existed gave Pendleton creative inspiration to lend his words to a real-life dramatic event.

…under the direction of Seth Ghitelman, the theater and an appealing cast have met the challenge.

Because the personalities involved are so known and admired, audiences do have to employ some suspension of disbelief.

Seeing the play January 10, the night after its opening, I found an enthusiastic audience that clearly believed and seemed to wish the curtain calls had lasted longer.

Michael Kharfen in the title role has the greatest challenge. He must convincingly inhabit the body and project the spirit of Welles, whose titanic talent is matched only by his ego. And he does. You’ll notice some inflections in the voice and facial expressions approximating those of the once-handsome director/actor, who by 1960 was obese and self-pitying as well as egotistical. Kharfen brings out the many layers of a complex man who could be impossible but also sympathetic.

As Olivier, Bill Hurlbut has the right accent and grace but also the inner torment. In his case it is less about a fading career than the demise of his 20-year marriage to the emotionally ill Vivien Leigh he still loves even while he pursues affair with the much-younger actress Joan Plowright he later marries. Hurlbut is humorously obsessive as his Rhinoceros character, as a way of undermining Welles.

In a moment of inspired slapstick, Ghitelman has Olivier and Welles fight over a cloth, which the director had suggested the actor use as a rehearsal prop.

Leta Hall has the least stage time but fills it with a memorable and moving turn as famed actress and beauty Vivien Leigh. She wonderfully conveys her love for her and dependence on her husband as well as the fragility and flirtatiousness of a woman deep in the manic throes of bipolar disease.

Among the historical liberties taken by the playwright is the claim that Kenneth Tynan brought Olivier and Welles together. No matter. David Dieudonne makes the most of the part of the irreverent self-destructive (smoking in spite of lung disease) theatre critic and literary manager of the National Theatre Company.

In one of the most touching moments of Orson’s Shadow Lena Winter, as Joan Plowright, meets Vivien Leigh at the rehearsal studio in a blend of courtesy, discomfort, and pity. She brings all these emotions alive for us.

In his community theater debut, Kenneth Matis portrays Welles’s assistant. Sean knows little about classic cinema and theater but is interested in whether Welles slept with Rita Haworth. (He is shocked to learn they had been married.)

In his Director’s Note, Ghitelman writes: “The play speaks of the desire to control our circumstances the way a director controls the production of the play. As Orson discovers egos, personalities, and such frailties of people make the control difficult, if not impossible.”

Continuing to try to create in spite of this lack of control probably makes theatre people “insane,” as the play literally proclaims. But that’s what also makes them so delicious—and so ripe for analysis. Orson’s Shadow does it so well.

The only proviso is that while knowing a lot of the theater and cinema references in the play isn’t absolutely necessary, it certainly helps.

There are frequent light changes, handled effectively by Bob Scott. Bruce Hirsch did the sound design.

Since accents are so vital to the play, Gary Sullivan, dialect coach, is to be credited.

Also significant is the role of Sally Cusenza, hair and makeup designer.

Taped music sets the stage before the play begins: first the zither instrumentation of The Third Man, in which Welles starred, and then “Tara’s Theme” from Gone with the Wind, in which Leigh famously played Scarlett O’Hara.

Running Time: Two Hours and twenty minutes with one intermission.

Advisory: There is some language, herbal cigarette usage and one slightly sexual (and quick) moment between Vivien and Sean.