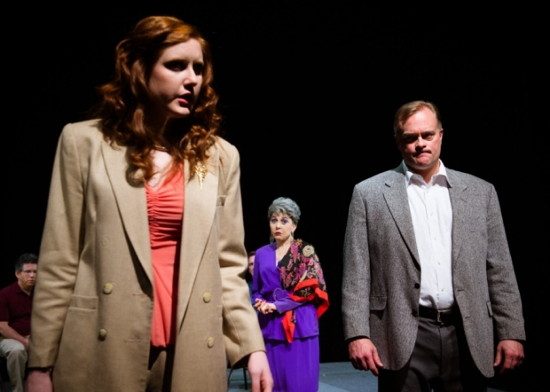 Although mystery plays like The Mousetrap (still running in London), Sleuth and Deathtrap were once a significant part of the theatre landscape, they’ve mostly fallen out of favor in recent years. These days, if you’re watching a whodunit on stage, it’s likely in some lame mystery dinner theatre. There, you might be fed overcooked chicken and undercooked storytelling. (The killer had to be left-handed!) Why leave your house to see a mystery when there are a decade’s worth of old Murder, She Wrote reruns showing on cable five times a day?

And speaking of that venerable mystery drama, that show’s creators (Richard Levinson and William Link) will be pleased to know that their 1982 script Rehearsal For Murder is receiving a handsome revival at Center Stage in Reston. (Levinson actually passed away in 1987, but he’s likely smiling down from whatever afterlife he’s enjoying.)  Reston Community Players has mounted the play as part of their 49th season, directed by Jessie Roberts. Does their Rehearsal For Murder come alive?

Levinson and Link are best known today for creating Columbo and the aforementioned Murder, She Wrote. Their mysteries steered clear of bloodshed in favor of clever, creative storytelling. In addition to their TV series work, the two also wrote a string of stand-alone made-for-TV mystery movies. Their best, Rehearsal For Murder, first aired on CBS in 1982. (It featured three of my favorite things: Broadway theatre, a whodunit mystery and actor William Daniels.)

The telefilm’s all-star cast also included Robert Preston (solid, as always), Patrick Macnee (somewhat miscast as Broadway’s sexiest leading man) and a young, relatively unknown Jeff Goldblum. The movie script was later adapted into a stage play (by D.D. Brooke), and it’s a natural fit, given the story’s theatre-based premise.  (There’s a special place in hell for reviewers who give away the endings of mysteries, and you can rest assured that this review is 100 % spoiler-free.)

This is a clever and creative mystery story, and the play’s Broadway setting only adds to the fun. Audience members will leave the theatre more than satisfied.

Alex Dennison (Ian Brown) is a famous playwright whose fiancée Monica (Kathy Ohlhaber) died the previous year under, as they say, mysterious circumstances. She had been starring in Alex’s most recent play, “Chamber Music.” (No, not the one with Amelia Earhart.) When she suddenly dies on opening night, the police rule it a suicide. But Alex has his doubts. A year later, he rents an empty Broadway theatre and invites the play’s cast, director and producer to join him in a reading of his new script. It quickly becomes clear that Alex’s new work is the story of Monica’s death. The script includes speculative scenes that expose each character’s motive for possibly killing Monica. Did one of them do it? What exactly is Alex up to? As the reading goes on, the tension mounts.

Director Jessie Roberts keeps this mystery train mostly on the tracks. The (necessary) exposition that makes up the first half hour is handled efficiently. In addition, the play frequently flashes back and forth, between past and present, reality and fiction, and those transitions are well delineated. The show uses the entire theatre (including the audience aisles) as part of the story, and as such, it’s a more immersive theatre going experience than most plays.

Overall, the cast played their roles with verve and specificity. Ian Brown successfully anchors the production as Alex. As Monica, Kathy Ohlhaber conveys the secret anxiety hidden under the woman’s steely surface. Among the supporting players, Christine Carter was the most memorable, as Karen, the ambitious understudy. She energizes any scene she’s in. Joan Susan Zeigler vests her producer character with fun Noo Yawk attitude. As a desperate director, Jay Stein evokes Rick Moranis at his nerdy best.

Although a fair amount of the show takes place on a bare theatre stage, Monica’s bedroom set (well designed by Ian Brown) provided the play with a distinct sense of place. Sound design by Revathi Murthy and lighting by Jeffrey Scott Auerbach helped to effectively heighten the suspense. And the costumes by Judy Whelihan served the characters well without distracting.

All whodunit mysteries live or die, so to speak, on the basis of how the mystery ultimately resolves. Without giving anything away, I will say that the ending of Rehearsal For Murder is mostly a success (like an above-average episode of Columbo or Murder, She Wrote). Levinson and Link don’t play entirely fair with the audience, and there are some important facts that the audience only learns at the moment of final revelation. (It’s unlikely that anyone new to the play will be able to guess the mystery’s resolution in advance.) Nevertheless, this is a clever and creative mystery story, and the play’s Broadway setting only adds to the fun. Audience members will leave the theatre more than satisfied. (And no, it doesn’t all boil down to the killer being left-handed.)

Advisory: Teens and above.