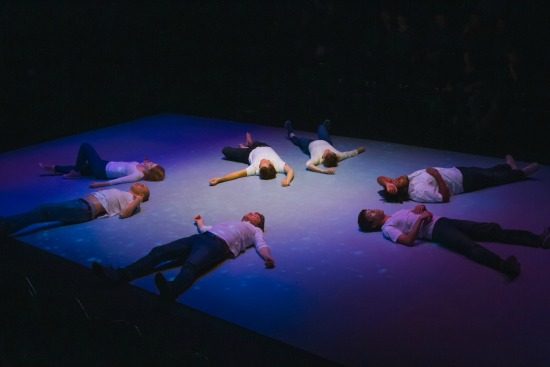 Natsu Onoda Power’s The T Party had its start as a workshop in the summer of 2013. As such, you’d expect the return of the work “celebrating gender transformation” at the Forum Theatre in Silver Spring to be a kind of loosey goosey thing.

But this loosey? Walk in and they’re having karaoke over here, and taking pictures with accessories in a booth over there. Inside the theater, should you be square enough to actually go to your seat, there’s a full fledged dance party.

It turns out to be a replication of a high school prom and you’re invited to join in, where some mild stories of a dude angry that his ex is dancing with another girl is played out before women are voted prom kings while guys are voted prom queens.

All of this thankfully serves as a sideshow — or maybe a pre-play intermission — before they get down to business and present some strong and moving scenes that play along the work’s theme.

‘The T Party’ is as groundbreaking in its approach as it is its theme succeeding in being both enlightening and entertaining.

The scenes are vivid and hit home in part because so many of them are personal stories, recreated for the stage: Two girls’ fling in college, the study of homosexual behavior of bottle nose dolphins, two transgender women who meet and begin to realize the many paths within their own.

Neither preachy or overly rainbow-flag waving, The T Party instead shows the complexities of humanity that goes way beyond the black and white gender identities society has mapped out.

More than that, it’s has a lot of clever and entertaining scenes, from a nature exploration of bear behavior at a club near Thomas Circle (where a Goldilocks just can’t be noticed), or a rock ’n’ roll reversal to the macho song in plain sight, Aerosmith’s “Dude Looks Like a Lady.”

Non-binary sex education class for kids frames the issue based on the hooha they happen to have on their heads: peaches or bananas.

An initial scene is told in the language of online texts; another concerns the confession of a man who harbored a female personality and blogged about his experience.

One spells out the details of a phalloscopy operation as the cast sings the song “One” from A Chorus Line.

All this in light of recent news of the 17 year old transgender teen in Ohio who killed herself because her parents wouldn’t accept her, and it’s clear that The T Party is elucidating an important issue that may lead to understanding and a turn from these disturbing numbers.

Still, it needs to be repeated that there isn’t a lecturing tone to The T Party. Indeed, everybody has a little to learn — even these cast members, who admit to comments they made in rehearsal or recite remarks from some of those who attended the workshop production (including the conservative who thought it would be about the Tea Party).

Power’s direction is sharp and vibrant. As she was behind the eye-popping local productions of A Trip to the Moon and Astro Boy and the God of Comics, it’s visually arresting with inventive use of overhead projections by Alex Leidy and G. Ryan Smith.

Mary Keegan did lights; Francesca Jandasek choreographed and Megan Behm was something called the “audience experience designer.” It was a good experience, so I guess she did a good job.

The T Party is as groundbreaking in its approach as it is its theme succeeding in being both enlightening and entertaining. And along the way, some may even join the dance party at the start.