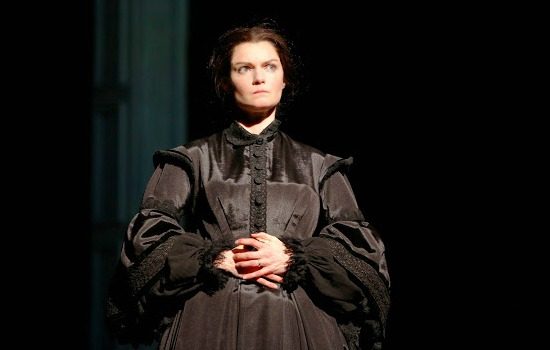 Humans have a regrettable instinct oftentimes to avoid a recent widow – what can one say to the grieving? How to act?

This apparently worked against both Mary Todd Lincoln nearly 150 years ago, and may work against a new play about her shattered life after the assassination.

James Still’s The Widow Lincoln opened this week at Ford’s Theatre, the very place where she became a widow.

I always thought it was a bit perverse to remake Ford’s Theatre, for years a warehouse, office space, medical museum and all around deathtrap (22 died when part of it collapsed in 1893) then was turned again into a performing space in the late 20th century – one that looked exactly as it did in April 1865 when John Wilkes Booth performed his most infamous role.

Remaking Ford’s back into a theater may represent the triumph of art over assassination, but still, it’s as odd as having a slow-moving annual limo parade at Dealey Plaza or continually recreating the Pan-American Exposition in Buffalo (where William McKinley was shot in 1901).

The looming of the bunting-draped Presidential box replica colors every production there for me, for better or worse. I’m always thinking: What would Lincoln think of this play? Would it be worth his night out? And usually it is, in things from “Our Town” to “Driving Miss Daisy.”

Director Stephen Rayne wants to shock us out of our preconceptions…

But while it’s understandable to commission a stage a work directly tied to the immediate history, kicking off a year-long marking of the 150th anniversary of the death (as if it would ever be forgotten, especially here), this one about Mrs. Lincoln is troublesome from the start, despite its many laudable aspects.

Those qualities are chiefly visual with the striking black costumes of Wade Laboissonniere and especially the monumental set by Tony Cisek, built on huge stacks and stacks of trunks to pack, lit to great effect by Pat Collins. (But the sound design of David Budries and Nathan A. Roberts and projections by Clint Allen are also very effective).

The very size of the surroundings means there’s no possibility to switch scenes, so we’re left with the widow among the towering stacks of valises, like subject of a 19th century Hoarders, going on about her life and fears, while all around her women sit on the stacks bearing witnesses, or as if part of a Greek chorus, observing and judging just as others must have during Lincoln’s time.

Mary Todd Lincoln didn’t have an easy life; people thought her a hayseed when she came to the White House, though she was actually the more cultured of the two; they thought she overspent as she tried to redecorate the White House; they even suggested her Kentucky roots may have given her a sympathy to the Southern cause.

So it’s not surprising that her head is spinning a bit in the days after the assassination, where it’s clear by the time we get to act two, she has no intention of leaving the White House to make way for the new president after nearly a month and starts hallucinating, seeing everyone from Queen Victoria to the star of Our American Cousin.

That play the Lincolns were seeing that fateful night was by most accounts a terrible one, but its actresses trod upon the Ford’s stage again, and strangely, befriend the grieving First Lady.

Director Stephen Rayne wants to shock us out of our preconceptions, so each act begins with a crash into darkness and a loud bang – louder probably than the one that made these walls qualify for historical preservation.

Shocks come quickly as Mrs. Lincoln doffs her gorgeous velvet black dress to reveal the ghastly blood-spattered one she wore that night. She’s understandably scattered, spouting lines from Shakespeare and commenting on their life in the capital (“Washington City is pitifully lacking in praise of others,” she says).

Program notes say she was misunderstood, but the theater’s gift shop has other ideas. There, you can pick up copies of both “The Madness of Mary Lincoln” and “The Insanity File.”

All of this creates the kind of character that is Ophelia without end – one long mad scene. And for all she has to conquer, Mary Bacon does a remarkable job in the role, going on and on in a ringing Southern drawl, more combative than defeated, up for any direction her character’s troubled mind takes her.

It’s not a one-woman play, but almost comes off as one, as the widow’s monologues, delusional here, defiant there, spin off one after another and the women surround her to watch or react. There is little forward motion to the play, except for the Presidential funeral train, whose progress back to Springfield is announced from  each crowded stop. That the widow isn’t on the train, fights fiercely with those trying to arrange the memorial and flat refuses to vacate the White House doesn’t make her the most sympathetic figure.

Among those that surround her, Caroline Clay and Linda Gravatt are standouts.

The whole cast is uniformly strong and they’re all women, which is to make some sort of point but tends to go against the story at some point. Shouldn’t we expect to see a comforting son at some point? Even the soldier at hand is a woman, which seems to be more about modern storytelling than historical truth. At any rate, it has nothing to do with Mary Lincoln, an historical figure who remains as much a mystery at the end as she was to start. And a great deal more of a pain in the neck as well.

Advisory: The theater itself recommends it for ages 12 and older because of its “complex language and ideas.”