Theatre Review: ‘The Wizard of Oz’ at Children’s Theatre of Annapolis 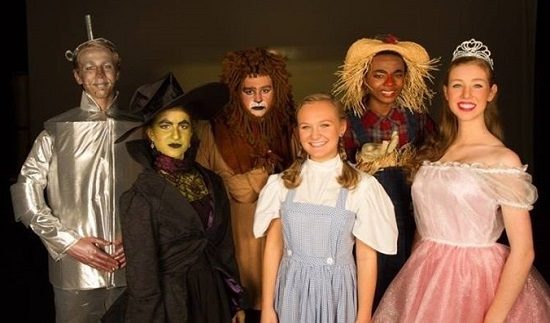 The cast of ‘The Wizard of Oz.’ Photo by Kathleen Ouellette.

The Children’s Theatre of Annapolis presents The Wizard of Oz, initially an adaptation of the 1900 book, “The Wonderful Wizard of Oz,” by L. Frank Baum. This musical adaptation is perhaps the most well known due to the 1939 movie starring Judy Garland and Ray Bolger. This Royal Shakespeare adaption of the Wizard of Oz closely mirrors the movie, however there are many differences. The Children’s Theatre recruits local children, ages 13-18 to perform, and is a non profit company funded by many community cultural grants, with an easy access location on Bay Head Rd. close to the Bay Bridge.

For those who have never heard or seen The Wizard of Oz, it is a story of Dorothy and her dog Toto living an ordinary farm life. They are magically swept up in a tornado landing in the extraordinary world of color, beauty, adventure and danger. Dorothy stumbles upon a scarecrow, tin man and lion, and they fight the forces of evil together, facing their fears and sacrificing their own safety for each other. Each of the characters come to realize that with friendship, trust and understanding, sometimes the things that you wish hardest for are already with you.

This enchanting production had my attention beginning with “Somewhere Over the Rainbow,” when a rich dulcet soprano, Julia Rach, playing Dorothy, demonstrated her sweet clear voice. With the petite stature and innocence reminiscent of a young Kristin Chenoweth, you can be sure Ms. Rach will continue entertaining audiences in the future. Marisa Roper, a beautiful Antie Em/Glinda possesses confidence and elegance and although Glinda was not dropped on stage by bubble, her pirouettes for her entrances and exits from the stage certainly were magical. But hold the door for the audience’s pick; the hilarious fashionista wicked witch, played by Alexandra Baca, whose laugh seemed simultaneously impish and dangerous bringing smiles and levity to the youngest theater lovers.  Ginger Pye Ouellette, playing Toto was another endearing addition, this well-trained canine (yes, it was a real dog) never missed an entrance nor bit any of her handlers despite being threatened by people in scary costumes and danced with for over 2 hours.

Indeed it was a large cast, with too many notable characters and voices for this reviewer to mention. Songs and dances that were omitted from the film were fresh and exciting. The director, Colleen Arnold-Fasone’s desire to have the ensemble be an integral part of telling this tale was evident throughout. Three musical crow puppets accompany the Scarecrow, played by Jordan Sledd. The Tin Man, played by Zachary Roth, encounters his three back up singers, the perfect pitch, well dressed trees with apples ready to sling. Our cowardly Lion, Austin Dare (great name if you are attempting bravery) was just as lovable as Bert Lehr was on the big screen. And what about the bugs? If you don’t remember the singing dancing bugs, it is because you haven’t seen this production. I do not want to ruin the surprise. And lastly, the unexpected magnificent voice of Annabelle Cotton, having but 2 solo lines, a 7th grader, shows that after all the upper classmen leave the area, there is plenty of young talent to take their places.

The choreography by Jason Kimmell demonstrated that even kids can dance and presented a production both professional and difficult. As these young actors found out, it is challenging to sing, while you are dancing the “Jitterbug.” The magic is in the music, presented by Laura Tayman and complimented by the set design and costumes culminating in this company’s ability to construct a professional production. Possibly the Wicked Witch of the East’s demand for couture, costumes by Michelle Lucente and Kathleen Ouellette, gave way to the richly colorful costumes giving the stage intrigue, by set designer Todd Croteau and Beth Wilson, and mystery. High level effects by Chris Timko such as sound, smoke and the electronic Wizard booth, takes expertise and a lot of behind the scenes support, his team had 12 other members. This production is complete with a live orchestra gracefully conducted by Maestro Mike Tayman.

This was a close to sold out performance, it is recommended that you get tickets ahead of time.