Opera Review: ‘Dialogues of the Carmelites’ at the Kennedy Center 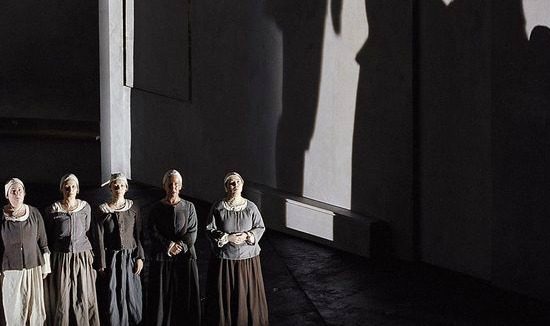 Cast of the ‘Dialogues of the Carmelites.’ Photo provided by the Kennedy Center.

The climactic horror at the end of the Washington National Opera’s production of Poulenc’s Dialogues of the Carmelites has an added jolt — it echoes too closely the beheadings of nearly two dozen Christians in Egypt last week.

And yet this sharp production is no immediate topical reaction to the news, but something that’s been in the planning in years, as are most major opera productions. Indeed, WNO Artistic Director Francesca Zambello first staged it with the Paris National Opera in 1999.

The opera about the overworked guillotines following the French Revolution was written by Poulenc in 1957, with the atrocities of World War II still fresh in his mind. Perhaps he knew that, sadly, genocide would likely continue in the world to make his tale timeless.

…no lack of fine voices

Dialogues is the story of a specific group of Carmelite nuns who, rather than disband and leave behind its abbey, marches martyr-like to their deaths at the end. It makes for a tense, dramatic conclusion for the work filled with Poulenc’s beautiful score.

But there’s not nearly as much drama in the start, when a fearful woman flees her rich family before the rebels overrun their mansion and heads out to the convent. There she finds some deep connections, but the nature of a nearly all female cast results in a lack of richness and diversity in the voices. Also unexpected is the general lack of ensemble singing — for a convent — and the reliance on individual arias.

There’s no lack of fine voices, though, with the WNO debuts of sopranos Leah Crocetto and Layla Claire, the latter as the new nun Blanche. They are augmented by returning mezzo-sopranos Dolora Zajick in a stirring role as a mother superior who rails against her own death, a highlight of the first act, and Elizabeth Bishop for some stirring work.

The real standout is the score itself, played with fervor by the orchestra conducted by Antony Walker.

Dialogues of the Carmelites is also worth seeing for the striking sets by Hildegard Bechtler — the same ones Zambello used in Paris, which she saved by shipping here lest they be destroyed. Already standing as monumental curved surfaces that rotate, like pieces in a Richard Serra sculpture plaza come alive, they are even more imposing under the intentionally brash lighting of Mark McCullough, casting even larger shadows.

There is also an issue when a foreign language opera is performed in English; the musical possibilities of the original French seemed stunted in parts by the translation. But it was Poulenc’s desire to have the words be sung in the language of the country it is in to make it more immediate to audiences. It still helped to have the supertitles flashing.

Claudie Gastie’s costumes were subtle and monochromatic, at least until the revolutionaries showed up with hats, tricoloures, and sticks and torches, like the overflow from Les Miz production.

Zambello, who showed heads falling when she directed Carmelites in Santa Fe, is back to the text that has the nuns disappearing off stage to their fates after climbing the scaffold while defiantly singing, the voices dwindling in number, one by one, with each fall of the blade — a sound effect that is sampled and timed with the swelling music.

The point is made; these days we don’t need to see another set of beheadings before our eyes.