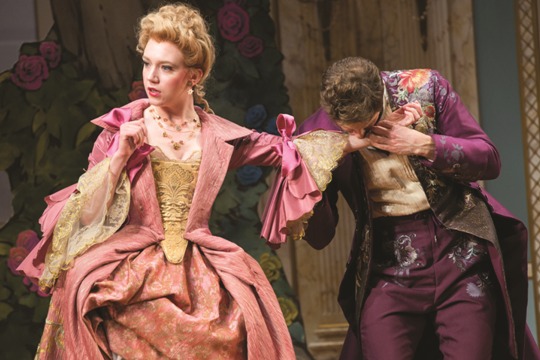 There are very few shows I have ever seen which leave me breathless both with laughter and delight for the entire duration of a performance. The Shakespeare Theatre Company’s production Monday night of The Metromaniacs, however, definitely achieved that effect from curtain up through final bow. Directed by Michael Kahn, The Metromaniacs is an hysterical comedy originally written in Voltaire’s France by Alexis Piron and brilliantly translated by David Ives, who rediscovered the long forgotten treasure.

…this production was pure play and glistening in seductive enchantment.

It is fairly impossible, as well as entirely unnecessary, for me to provide a recap of the plot. There may, in fact, be no less than five plots that create the whole–which is in short an array of spectacularly costumed, deliciously absurd characters, all of whom are practically drunk on love of poetry, language, or love itself. Don’t worry, though–while complicated, you won’t have any trouble following the twists, but to walk you through them all would spoil some of the fun for you. Each of the actors played their role wonderfully, drawing me into their ridiculous world and alternately garnering my sympathies and revulsion at their pathetic attempts to satiate their (usually misplaced) passion. After all, what makes for a better show than stories of love gone awry in plot twists of serially mistaken and assumed identities?

Christian Conn plays the young poet, Damis, whose ardent passion for poetry–and an elusive poetess–enflames his pen. Anthony Roach plays the dashing but dumb Dorante, who also suffers an enflaming passion; his directed towards his father’s rival’s daughter, Lucille. She, most drolly played by Amelia Pedlow, has an appetite for poetry that proves so carnal she turns positively primeval and the plot dashes madly about a thicket of trees planted in the middle of her father, Francelou’s, ballroom.

Adam LeFevre, in the jovial, eccentric role of old Francelou, gave my personal favorite performance of the evening–even when his sputtering character lobbed a glob of spit in excitement so large and far that it could have gone into orbit! He encompassed the happily scheming father and audacious poet so well that I wouldn’t be surprised to learn that he really was just playing himself.

Thickening the plot was the ever practical and earthily hysterical maid, Lisette, whose assumption of Lucille’s identity within the play leads to ever more outrageous situations as the characters fall in love with one person who turns out to be another who may be play-acting yet another still! Lisette is delightfully played by Dina Thomas. Of course, the play would have been but half complete without the gutting performances of Michael Goldstrom as Mondor, Damis’ valet, and Peter Kybart as Balvieau, Damis’ crochety uncle.

Although unlisted, another character in the production really is the language of The Metromaniacs, coupled with the mastery of the actors over word and rhyme. “Crazy for subways?” Dorante asks, trying to make sense of the word, “metromaniac” as it was given in reference to the lovely, disinterested Lucille. “No! Crazy for verse!” And so it is. For being a translation of a very old piece of French writing into both English and rhyme, the language of the play is so effortless that you can barely believe it isn’t the original tongue. It isn’t “old” rhyme, either: I almost died in my seat hearing “tweets” casually (and quite naturally) mentioned, or over the way Lucille draws out a long, sarcastic “wow” or “what-ev-aaaah” in a bored response. As a lover of words, this production was pure play and glistening in seductive enchantment.

The entire production is fabulously costumed in period piece, and if I were ever hungry for clothes, I would be satisfied from the feast of outfits. This satiation would include the set as well. While the play unfolds in full on one unchanging set, the grand, airy ballroom with its absurd arbor patch and its fake fun rocks not only adds a level of play to the piece which the actors clearly delight in, but it also serves to remove us so far from reality that we are able to be fully immersed in the absurd–and so, perhaps, experience reality more keenly for it.

That is, perhaps, the best part of this play: it is a complete laugh trip to somewhere else while never once leaving your seat. As David Ives stated, “…that’s the beauty of the play, its purpose and part of the source of its delight. We go to certain plays to inhabit a world elsewhere, and La Métromanie is that kind of play in spades.”

His words certainly resonate with my experience, and I, for one, would love to go soak up another such wonderful experience.

Running time: About two hours including one 15 minute intermission.