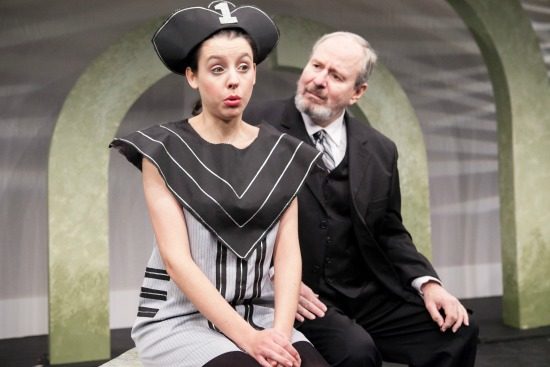 Stephanie Schmalze and Vincent Clark in ‘Back to Methuselah, Part 2’ at Washington Stage Guild. Photo by C. Stanley Photography

Much respect is due the Washington Stage Guild, which has been systematically producing the plays of George Bernard Shaw for more than 25 years. In that time and in five different locations, they’ve done 30 of the more than 50 plays he wrote from 1892 to 1950.

But that comes with a big asterisk, as they are counting his epic, time-traveling Back to Methuselah as five different plays. The Stage Guild is one of maybe three professional theater companies in the Western Hemisphere that’s ever tried to stage the whole thing. But true to time travel, it’s taken, well. Time.

The first two chapters, presented last season as Part One, were set in the Garden of Eden, 2040 B.C., and in the “present day,” which in Shaw’s case meant about 1920.

In parts three and four, now playing at the Guild’s current home at the Undercroft Theatre under the title Back to Methuselah, Part Two, we’re zooming way into the future, first to the year 2170 — what was meant to be 250 years hence when it was written (but which is actually only 155 years from now today). After intermission, time zips all the way to 3000 A.D.

…we are firmly into this literary excursion and not willing to back out now.

Because much of the cast, and the same director and stage designer are back, there is something welcomingly familiar about the goings on. And though what they’ve created looks like one of those old fashioned versions of the future you’d see in Jules Verne, you know it’s all serving Shaw’s ideas.

While last season’s segment actually had the kind of quote you’d recall as if Shakespeare (“Some look at things that are, and ask ‘why.’ I dream of things that never were and ask ‘why not?’”), the two long chapters of part two have little of that pithy eloquence.

Instead, the lengthy work that was originally intended to be read and not produced serves as a vehicle for his increasingly cranky thoughts — that the House of Commons are a “menagerie of degenerates,” or that politicians are literally in asylums.

Shaw’s continuing thesis in Methuselah is that man is too immature to rule the world; he doesn’t live long enough to gain the necessary maturity or intelligence. So the answer is to live longer, way past 100 to 200 and even 300, who would be the wisest sages around.

Longevity is not just his thesis, it’s his form. He introduced those ideas clearly in part one, indicating it could save mankind if it happened. And now, as the subtitle of Part Two informs us, “The Thing Happens.” The ruler of England (identified as president of the British Islands but who wears a silly crown) is sort of powerless; the actual administration is done by the superior Asian and Africans, in Shaw’s vision, a kind of xenophobia in reverse.

Not a lot of action occurs. But the talk and arguments are kind of lively. It’s like listening to a beloved uncle, going on and on about a theory that could never happen.

Once more this is enlivened by the Guild cast, that includes the delightful Conrad Feiimger; Laura Giannarelli, with her melodic voice; the versatile Michael Avolio; and the all purpose Brit Herring. New to the series, Jacob Yeh undercuts the message of the plays — as the most youthful member of the first half, he brings the most vitality.

Director Bill Largess begins the proceedings the way serialized television shows do: With a kind of “Previously on..” segment summary involving video from last season’s Part One.  Set designer Shirong Gu continues the motifs of last season, with a kind of lime green and curved arches. The particulars of the futuristic offices, though, are strictly old fashioned; with a communicator that looks like a candlestick telephone and a video screen that’s actually just a screen door. It communicates the idea of the future as envisioned in the 1920s. Debbie Kennedy’s costume designs further this dichotomy.

Things are a little more abstract in the second half, with the action having jumped ahead to the year 3000. There, Vincent Clark plays a man visiting Ireland who is so out of touch with its new inhabitants they can scarcely communicate. Certain words — morality, trespassing, blushing — have no meaning at all in the new world.

“The Tragedy of an Elderly Gentleman,” as the chapter is called, is that he is in fact too young to appreciate it. He’s a short-liver, they call him (and god bless them for pronouncing it correctly with the long i).

This half is enlivened by newcomer Stephanie Schmalzle, who can’t understand the small ways of thinking of this visitor (she can’t understand why he’d travel either). As in last season’s production, Lynn Steinmetz seems again spectacularly miscast as a giggling ingenue, but I’m starting to get the idea that she’s there to further the idea that our idea of aged really indicates someone who is too young.

There is drama, eventually, when the action switches over to the temple of the Oracle, played with expected authority by Giannarelli. But the flashing lights and thunder are in the end not as convincing as Shaw’s flinty prose.

Still, by now we are firmly into this literary excursion and not willing to back out now. Time travel, in the end, is real; by the curtain call, we’ve all traveled nearly three hours into the future. We’re all in this together, friends; and here we come, the year 31,920 A.D., in 2016.

Nothing can seemingly stop the Stage Guild, though snow caused cancellation of Saturday’s opening night. It’s the first time that happened since 1993, artistic director Largess said. Back then, they were presenting Karel Capek’s “The Markopoulos Secret,” which is said to be a direct response to Shaw’s “Methuselah.” Which is either a huge coincidence or something weirder than anything the Oracle could conjure.

The Washington Stage Guild production of Back to Methuselah, Part 2 by George Bernard Shaw, continues through March 15 at the Undercroft Theater in the Mount Vernon Place United Methodist Church, 900 Massachusetts Ave., NW. For tickets call 240-582-0050 or online.