Theatre Review: ‘Chicago: The Musical’ at The National Theatre 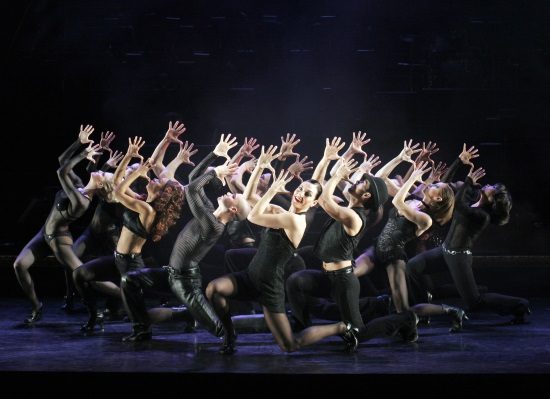 Terra C. MacLeod as Velma Kelly and the cast of Chicago the Musical. Photo by Paul Kolnik.

It is always a treat to experience a Broadway musical, and seeing Chicago: The Musical, presented by Barry & Fran Weissler at the National Theatre on Tuesday night continued that trend for me. With book by Fred Ebb and Bob Fosse, music by John Kander, and lyrics by Fred Ebb, the show certainly made for a great night of entertainment. This current tour is based upon the long and still running Broadway revival and features Director Walter Bobbie and Choreographer Ann Reinking’s Fosse style choreography and is faithfully recreated by David Hyslop and David Bushman respectively.

Chicago: The Musical is a throaty-voiced musical roiling up from the dark life of its make-or-break city namesake. It heaves with sensationalism and glorified scandal in the late 1920s time period where women especially were finally getting to do a lot–if they were willing to “give” a lot. Roxie Hart, played by Bianca Marroquin, finds herself on the wrong end of the law after committing a murder. She quickly discovers not only a healthy fear of “rope tricks,” but also the art of commandeering the swinging spotlight and working her natural assets to gain freedom.

… a great night of entertainment.

When Roxie first finds herself in prison she can’t stop praying, but she quickly learns the lessons she is given: “Baby, you’re talking to the wrong people.” Because of course, she should be talking to the people like Matron “Mama” Morton, played by Roz Ryan, lawyer Billy Flynn, played by John O’Hurley, and the press–and does she! In a scene where she begs her estranged husband, Amos, played by Jacob Keith Watson, to hire a notorious and successful lawyer for her, she runs the gamut of emotional pleas until finally securing his assistance with a kitty-cat gimme-some-love roar.

Much of the show was wordplay through music and dance. Songs shimmied and sighed, dance moves cranked up tension and heat. “We Both Reached for the Gun” brilliantly displayed the manipulation and sensationalism as lawyer Billy Flynn turns ventriloquist and gives Roxie the story they sell to the easily excited, fascinatingly fickle press.

There were so many good dance and song numbers that make up this show, but “Cell Block Tango” with murdering showgirl Velma, played by Terra C. MacLeod, kept its place as one of my favourites. Shooting to the top of the list were both songs featuring “Mama” Morton. “When You’re Good to Mama” had a delightful combination of dry humour and cell soul, and “Class,”a charmingly blended duet by Mama and Velma, was both amusing and poignant.

Costuming by William Ivey Long was both sumptuous and sparse, with lots of skin and leg. In fact, in Billy’s number “All I Care About,” as well as his humorous “exit music,” I found myself thinking that the wardrobe would do Victoria Secret proud with all its suggestive trappings and feather wings flapping around on beautiful women.

For all the flare of the costumes, John Lee Beatty’s set itself was spare. The band was brilliantly set on stage in good old jazz box fashion, with the box itself often illuminated in the same glitzy gold frame as framed the stage. Actors used the metal pilings on the side of the stage for play room, as well as the band box, coming in and out near conductor Robert Billig. This was one of my favourite components of the musical; the way that the show didn’t take itself too seriously for a laugh. Even the conductor and musicians had lines to give in the show, and Roxie got to try her hand at conducting (she shouldn’t make it a profession), and–best of all–the audience even got picked on occasionally. Beware sitting in the front row!

The effect of all the camaraderie on me was to feel comfortable engaging in a dark world which I hope not to otherwise explore. It also served to bring me into the same place so that when Velma sings “I Can’t Do It Alone,” or as we watch the hard knocks she and Roxie go through separately and together (and even deal each other), we, from our comfortable seat in the audience, know how they feel. If that isn’t good theatre, what is? I woudn’t go so far as to say the show itself was “razzle-dazzling,” but it certainly was evocative and quite enjoyable.

Running time: Two Hours and 25 minutes with one intermission.

“Chicago: The Musical” is running at the National Theatre – 1321 Pennsylvania Avenue, NW in Washington, DC – through February 15. For tickets, click here.