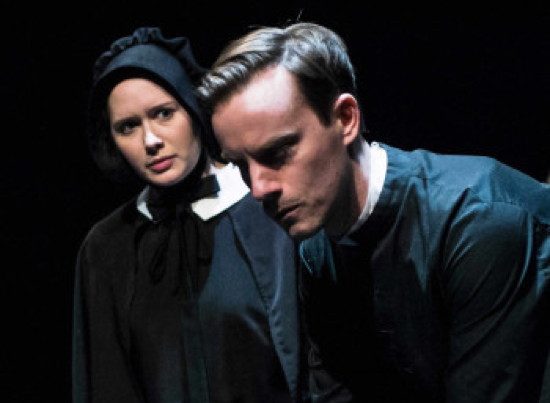 In the austere functional office of head nun and principal Sister Aloysius, order reigns supreme. People know where to sit and when to speak. And decisions are made based on the rules of the church, augmented by her hyper-endowed sense of right and wrong. When a seemingly innocent episode between a priest and a student are called into question, events are set in place to provide scintillating dramatic moments in Doubt, A Parable at 1st Stage Theatre at Tyson’s Corner

Playwright John Patrick Shanley’s sharp-edged drama is a work of delicate ideas and sledgehammer results, all with very little stage action. Aside from this Tony award-winning play, his successful career includes many screenplays, including Moonstruck. His gift for biting dialogue is evident.

…a pins and needles dramatic powerhouse.

And from a hardscrabble childhood which included several schools of this type, he draws on a world he knows well–1964 New York City and as he says “This play is dedicated to the many orders of Catholic nuns who have devoted their lives to serving others in hospitals and schools….though they have been much maligned and ridiculed, who among us have been so generous?”  It was also a turbulent time in our society, yet the walls of the church had only started to be shaken and challenged.

We first meet Father Flynn (Rob Jansen) as he gives a sermon, stating “Doubt can be a bond as powerful and sustaining as certainty.” In Jansen’s earnestly likeable portrayal, he is more big brother than priest, with an easy affinity with the children and a progressive nature very much at odds with Sister Aloysius. (Jessica Lefkow)

Lefkow’s performance is a master class in character immersion as she becomes an icy emissary of all things proper, with a preening voice that drips of righteousness.  Calculated moves and a modulated voice add to the effect. You do not want to visit this principal’s office. Her initial scene with young Sister James (Jenny Donovan) had James in tears and questioning her work and values, and as James says later “I’ve lost my love of History and I can’t sleep at night.” Donovan, as the witness caught up in the intrigue, provides the link to human compassion, and gives a natural performance in a less is more situation.

The delicate dance of words and ideas continues as Sister Aloysius pushes for the truth, searching for a way to finalize this incident of which there is so much uncertainty.  We receive another context as the young boy’s mother is called to the school. Mrs. Muller (Lolita Marie) in a remarkable cameo role, offers up her view of what ­she would like happen, heartfully explaining that her son’s only friend is Father Flynn, and she would accept whatever that relationship is– if only to keep him in school. Watching Marie and Lefkowitz onstage in this exchange was truly mesmerizing.

The careful dance of words and ideas continues between Father Flynn and Sister Aloysius, two combatants locking horns, until one ultimately gives in. But was anything ultimately proven?

Director Michael Dove has orchestrated a pins and needles dramatic powerhouse. It is a show filled with pronouncements and parsed words, so the dramatic pacing is vital and it came though well.  There were quiet gasps in the audience at the several twists and turns of the plot revealed.

Doubt is an unswerving, thought-provoking study of human nature, of deciding what we can really believe.  As Sister Aloysius intones ‘If you forget yourself and study others, you will not be fooled.’

Running Time: 90 minutes without hours with no intermission