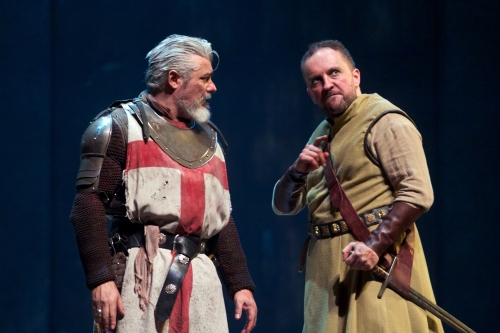 There is no other play in Shakespeare’s canon that conjures the power of fear and superstition the way Macbeth does. From the first appearance of the witches, it’s made clear that this world operates with rules particular to their special kind of magic. David Greig’s Dunsinane, currently playing at the Shakespeare Theatre Company, places itself firmly in Macbeth’s Scotland, but retains the uncanny mood of the original, creating a portrait of Macbeth’s country that is at once dark and beautiful.

Dunsinane begins with the English assault on the eponymous castle, with soldiers led by Siward (Darrell D’Silva) attempting to embody Birnam Wood. They wield branches like swords, mimicking the sounds of the forest, as they begin a covert mission to unseat the tyrant king Macbeth. Their success is marred by the unexpected survival of Macbeth’s widow Gruach (Siobhan Redmond), reported deceased in the original play. Her presence complicates the accession of Malcolm (Ewan Donald) even after Macduff (Keith Fleming) kills Macbeth and puts his head on a spike. A prisoner in her own castle, she mounts a rebellion destined to tear the country apart, and ruin the peaceful transition Siward is determined to accomplish.

This National Theater of Scotland production gives us a Gaelic-speaking queen, a fog-shrouded Celtic cross, and the story of a nation built on blood and anger.

Dunsinane is a moving and thought-provoking view of what it means to launch an invasion of an unwilling foreign land–punctuated by the poignant letters of the Boy Soldier (Tom Gill), who follows his commander through the winter in a war he does not fully understand. In the shadow of a hill made of uneven steps, the body count mounts, and the tension between Siward and Gruach increases, culminating in the murder of her son and the near-death of her infant grandchild. Malcolm, on the sidelines, provides an astute lesson in politics, preferring to appear unthreatening and jovial to the myriad of touchy and stubborn Scottish lords who inhabit his newly won kingdom. The land of “rock, bog, forest and loch” over which he rules has more in common with the divisive, tribal conflicts of the Middle East than with Shakespeare’s comparatively sedate narrative. This National Theater of Scotland production gives us a Gaelic-speaking queen, a fog-shrouded Celtic cross, and the story of a nation built on blood and anger.

Macbeth may have ended on a somewhat positive note–the tyrant has been conquered, his reign of terror at an end–but for Macbeth’s country the story is not over, and the cast of Dunsinane demonstrates this with unparalleled skill. Siobhan Redmond owns every scene she’s in, dominating the stage with a queenly bearing and fiery determination. She serves as a stark contrast to D’Silva’s Siward, whose cruelty mounts as his failures do. Every moment of the production feels focused and coherent, with an excellent combination of comedic and dramatic timing, a testament to both an excellent cast and Roxana Silbert’s phenomenal direction. Live music, with a Celtic rock refrain, serves to create as much atmosphere as Robert Innes Hopkins’s somewhat simple but powerful set.

Advisory: Show contains some violence and profane language. Not appropriate for children.

Runtime: 2 hours and 35 minutes including one 15-minute intermission.

Dunsinane, a production of the National Theatre of Scotland the Royal Shakespeare Company, is currently playing at the Shakespeare Theatre Company at Sidney Harman Hall in Washington, DC through Feb. 21, 2015. More information can be found here.