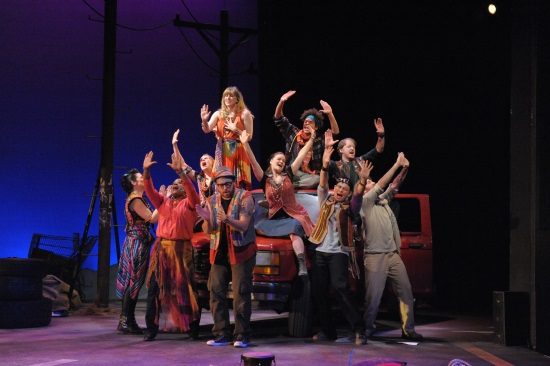 The cast of ‘Godspell’ at Olney Theatre Center. Photo by Stan Barouh

Olney Theatre Center launched its 77th season with a joyful and uplifting production of the musical Godspell.  With music and lyrics by Stephen Schwartz who went on to write Pippin and Wicked, and a book by John-Michael Tebelak, the production opened off Broadway in 1971 and has become a staple of high school and community theatre as well as numerous professional mountings and tours since.

Based on the Gospel of Matthew, the show is a mixture of Scripture parables as told by Jesus loosely tied together with songs and dance.  Godspell at Olney is an updated version based on the 2011 Broadway revival. The original 1971 production had a hippie clown folk motif in keeping with that era. The Olney production has more of a hipster, rock and amped vibe more in keeping with the generation brought up on the musical Rent.

Adding humor to the production are the updated parables with game shows Pharisee Feud as a take-off of Family Feud (with audience participation) and The Neighbor Game mimicking The Dating Game that modernized the Good Samaritan parable. The funniest update was the depiction of Hell with “Let It Go” from the film Frozen.

Director Jason King Jones competently melds the diverse elements into a cohesive production.  There was flawless timing executed by the company in both dialogue and action throughout the stage, whose set was cleverly designed by Paige A. Hathaway.  The technical elements, such as Sonya Dowhaluk creative and vibrant lighting design and Will Pickens’ effective sound design enhanced the quality of the production by working completely in synch with the performers.

Burning Man in the Nevada desert was the inspiration for the beautiful set (and colorful costumes by Ivania Stack).  The set contains multiple levels with the main feature being scaffolding at upstage right.  This construction provides multi-functionality, such as a performing platform during several numbers, the location for the crucifixion, and it also houses the 6-piece orchestra.  The set also includes telephone poles, a shopping cart, barrels, a working water pump and assorted other items.  Props such as luggage carried on by the company also adorned the stage and is used at various times.

Christopher Youstra does his usual excellent job as Musical Director, playing the piano and even participates in one of the parable games.  Bryan Knowlton provides the choreography for the largely hip dance numbers and movements.

Jordan Coughtry, making his Olney Theatre debut as Jesus, lit up the stage with charisma, and his voice soared in the song “Beautiful City.” In a simply dazzling performance, Mr. Coughtry, who was trained as a Shakespearean actor, showcases his versatility to the delight of the audience.  Aside from his excellent vocals, he dances with precision and clearly seems to enjoy himself while doing so.  Mr. Coughtry’s comedic lines are also delivered with gusto, and when called upon in dramatic moments like when he is experiencing self-doubt, he pulls that off as well.

Rachel Zampelli was cross-gender cast in dual roles of John the Baptist and Judas. She propelled the show to a rousing start driving onto the stage in a red Ford pickup truck singing “Prepare Ye” as John the Baptist.  Ms. Zampelli performed admirably as Judas and sang “On the Willows” with feeling.

Each of the talented company members (four male and four female) had a chance to shine and lead off a song then the rest of the company joined in. Allie Parris sang the show’s best known song “Day By Day” with a crystal-clear, lovely voice.  Nova Y. Payton, Emily Zickler, and Maggie Donnelly round out the female cast members.

Godspell at Olney Theatre Center is a quality production aided by superb direction, strong technical elements and a lively, talented cast.    The musical has a timeless message of love, high energy performances and joyful music that should help us live life day by day.

Running time: Two hours and 15 minutes with an intermission.