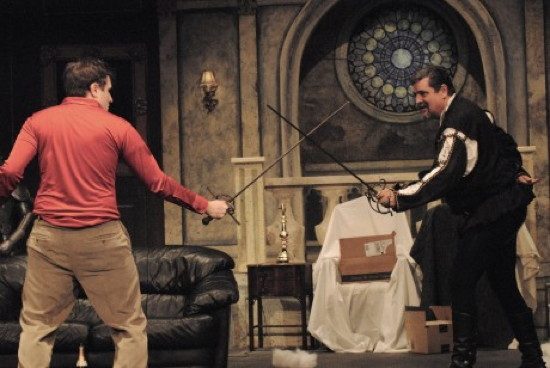 I Hate Hamlet follows Andrew, a popular television actor, as he prepares to take on the role of Hamlet in his first theatrical production since his rise to stardom. Andrew must navigate a morass of obstacles, including the appearance of the ghost of actor John Barrymore, who insists on tutoring him in the ways of Shakespeare. Further complications arise when Andrew’s writer-director-producer-etc. friend offers him millions of dollars to star in a primetime television show. Does Andrew take the money and run, or does he return to the theater, dooming himself to a lifetime of intermittent gigs performing Chekov in basements?

2nd Star delivers a good-natured, humorous production. Zak Zeeks, as Andrew, is a perpetual motion machine, running to and fro across the stage, tearing his hair out, and experiencing enough self-inflicted angst to give Hamlet himself a run for his money. Zeeks does not shy away from broadcasting Andrew’s neuroses to full comedic effect. He is at his best when impersonating the theatrical juggernaut that is BARRYMORE.

I feel compelled to use capital letters to describe Barrymore, mostly because of Fred Nelson’s performance. Nelson delivers exactly what the role requires, with all the necessary pomp and circumstance for such a bombastic individual as BARRYMORE (last time with the caps lock, I promise). His comedic timing is precise at every turn.

The opening moments feel somewhat expositional, but once the ghost of Barrymore appears, the play takes off running. Costume designer Mary Wakefield makes some neat design choices. Bravo for tights, lots of tights… a shameless display of tights! When Andrew finally appears dressed as Hamlet, he wears a sparkly black doublet, which is exactly the sort of ridiculousness you would expect from a Shakespeare production capitalizing on its hot young television star in the title role. High praise is due to props designer Joanne D. Wilson, who found a decorative globe that opens up to reveal a liquor cabinet. As Barrymore would surely agree, every house should have one.