Theatre Review: ‘Last of the Whyos’ at Spooky Action 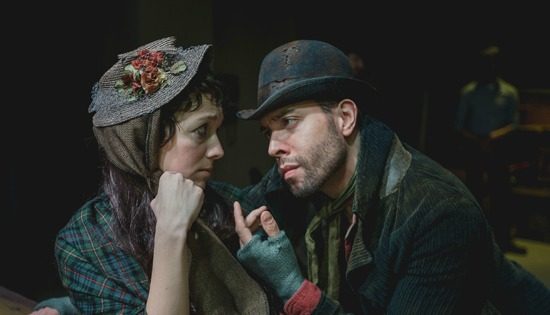 Back in the 1980s, playwright Barbara Wiechmann used to marvel at the bombed out surroundings of New York’s Coney Island. Caught between the ruins of the past and promise of future redevelopment, she was struck by how much of its 19th century roots were apparent.

That’s what led to Last of the Whyos, which was written back then but is just now getting its world premiere at Spooky Action Theater. In it, a tough guy, Eddie Farrell, king of the Whyos Gang that ran the boardwalk back in the 1880s, is suddenly transported 100 years into the future where he’s found some of the docks quite the same, but the ocean had risen quite a lot.

There are elements he recognizes there and others that seem just odd. Women have a much more powerful and self-determined role, but are still ultimately mistreated. And the gang of self-styled sideshow freaks who hang out in the off season carry with them the same kind of old time curiosity they used to before the turn of the century.

It may be odd that Farrell doesn’t venture far enough off the beach to actually see a car, or doesn’t look up to see a plane. But at least in the 1980s he doesn’t have to deal with laptop computers or cell phones.

He still doesn’t have an easy time — thugs just a generation away from the Five Points district uprisings that were depicted in Gangs of New York are just jerks in 20th century city a decade after its bankruptcy.

But people see things in Eddie; some even think he’s a deity.

The problem for him — and the play — is to figure out some sort of resolution: Will he ever get back? If so, how? And if he does, what will we have learned?

It’s a conundrum that’s not entirely solved by the end of the saga, which by then had undergone one particularly despicable turn. But maybe life itself is not so easy; doubly so if you’re skipping ahead a century.

Much of Last of the Whyos works thanks to the bravura performance of Michael Kevin Darnell, who formerly appeared in Spooky Action’s The Wedding Dress and in their clever reworking of Candide. He’s got swagger and seethes with an uneasy yearning even before he’s dislodged in time, with an accent and spirit that may be inspired somewhat by Daniel Day-Lewis’ charged performance in Scorsese’s Gangs of New York.

As directed by Rebecca Holderness, there are some convincing, acrobatic fight scenes from the old days (choreographed by Claudia Roseales and Brad Waller) that make one wish they had lingered a little longer in the past.

But Tia Shearer, who was pressed into sales in the 1880s, returns with considerably more elan as a seaside trainer of sea lions at an aquarium. There, she attracts not only Eddie, but a straight-laced businessman from the city who is also named Farrell. As played by Seamus Miller, he’s also a little like Clark Kent in his oversized glasses. No superhero lies inside however.

Dane Figueroa Edidi has just the right expansive personality to fill her role as the empathetic fat lady.

Bette Cassatt is quite expressive as a mute monkey woman, able to convey feeling by the tilt of her head, despite being largely hidden by facial hair.

Randolph Curtis Rand strolls around singing the hit parade of the 19th century, as if to remind Eddie of his past and of the task he’s supposed to do for the big boss Sweeney, whom he portrays in splendid dandy attire.

It’s always a treat to see a Spooky Action production just to see how they creatively use the space lent them by the Universalist National Memorial Church. This time, the audience climbs downstairs and goes through the kitchen to reach the seats. And the church’s basement, with its curving arches, is perfect for the under the docks locale that serves the play well. Vicki R. Davis designed the set, aided by projections of the ocean by Fly Steffens and lighting by Matthew E. Adelson that bring boxy architecture of the 1980s suddenly into view.

With some strong individual scenes here and there, “Whyos” spends some of its time spinning its wheels. And not everything is resolved. Time travel is messy like that.