Theatre Review: ‘Murder in the Cathedral’ at Compass Rose Theater 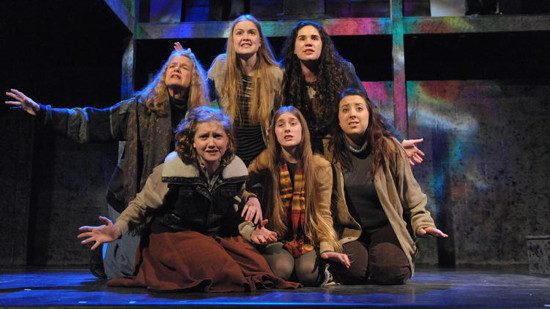 I had misgivings about this assignment. Murder in the Cathedral, directed by Lucinda Merry-Browne and written by Nobel Laureate T. S. Eliot, by its very title and author had something to do with the Catholic Church, written by a famous poet, and this little Jewish girl is only slightly more versed on Christianity than she is on Chinese. But I took on the mission and my hope is that I will do this review justice, and that any mistakes on my part receive a notable chuckle and not the wrath of an intellectual or Christian historian. In my desire to making sure that I get the plot correct, I have decided to do the unthinkable and quote directly from the program for summary:

Murder in the Cathedral by T. S. Eliot is a versed dramatization of the murder of Thomas Becket at Canterbury Cathedral in 1170. Eliot drew heavily on the writing of Edward Grim, a clerk who was an eyewitness to the event. The play takes place in December 1170 and chronicles the days leading up to the martyrdom of Thomas Becket. The chorus is a key part of the drama, its voice changes and develops during the play and it provides a link between the audience and the characters. Two priests are present, and they reflect on the absence of Becket and the rise of temporal power. The four tempters parallel the Temptations of Christ. Becket struggles with four tempters, each with posing a different challenge. Praised for its poetically masterful handling of issues of faith, politics, and the common good, T. S. Eliot’s play bolstered his reputation as the most significant poet of his time, it is winner of the Nobel Prize for Literature.”

…there are no weak links in the acting, each of the characters knows his character’s opinion, and conveys it to the audience.

Compass Rose Theater is indeed a small venue for this large cast of 13 actors. The theater itself holds no more than 90 so the intimacy of the stage is a rarity for most theater patrons. It is a theater that in addition to producing amazing productions such as Cats, The Sound of Music, The Miracle Worker and Oliver, is also a teaching/acting facility, funded by The Anne Arundel County Arts Council, Maryland State Arts Council, the City of Annapolis and of course, the generosity of appreciative patrons.

The stage is set like the dais of a cathedral; the audience becomes parishioners at times throughout the production. The chorus begins our show with the talents of Eliza Geib and McKenzie Vergauwen two amazingly young scholars, 13 and 14, (who in my opinion should receive an A in English for the next 2 years just for their interpretations of this complex T. S. Eliot poem.) Brava ladies! Also appearing in the chorus bringing significant acting experience, the dynamic talents of Ali Evarts, Nancy Lindner, Liza Skinner, and Chelsea Tuffy. The chorus chant, yells, and whispers together the thoughts, fears, hopes and anger of the populace. It is intimidating, hostile, and acted out with a passion of beauty that is captivating to the audience. The characters do not simply say their lines, they implore the audience and coax them into their feelings of fairness, their well thought out actions and lithe movement keeps our attention. The actors surround the audience, and at times alarm us, with the voices of 6 heated women fuming from either side of the theater. Each of the actors has punctuated diction, and the words are clear and impossibly fast, as the audience struggles to hold on to each word and concept.

Introduced next is the first tempter, Ryan Dalusung, dashing with a slight built and goatee; he possesses the silent movements of a cat and begins a dialog with an unresponsive audience. It is at this time that the audience realizes they are in for a rare treat. I have seen hundreds of plays and this one rates in my top 5 for theatrical brilliance. Priests, Thomas Beheler and Thomas Peter, fitting priestly names, grace our set providing an overview of the history which is integral to the show. The speculation that after 7 years of self-imposed exile, and with risk that he will be killed upon returning, the Archbishop, played convincingly with humility and passion by Charles Matheny, does indeed return. The next 3 tempers/knights, fiercely played by J. Hayes Biche, Christopher Williams and Ray Schultz, take turns in presenting their cases on why killing the Archbishop is both likely and just.

Again, there are no weak links in the acting, each of the characters knows his character’s opinion, and conveys it to the audience. The Archbishop Thomas Becket preaches to us, his parishioners, telling of his tribulations, secure in the understanding that he will be killed. He repents on staying away so long, understands the danger, but is willing to become a martyr so that his people can be saved. One by one the tempters come offering the Archbishop convincing justifications to save his life. But each time it is rejected by the superior conviction, that rejecting these ideas and saving his life, would destroy his chances for his spiritual life in heaven. He states that “(l)aws of love above the laws of men.” The Archbishop also says that the “orders of God and man are incompatible.” Indeed, something to think about deeply.

Poignantly directed, with the care and creativity you normally would see at much bigger play houses, Lucinda Merry-Browne, has a great aptitude for literary interpretation. Ms. Merry-Browne has directed over 45 professional productions as well as countless student shows, and is the founder of Compass Rose Theater. She an experienced theater educator bringing her talent and passion to this intimate Annapolis treasure. The lighting designer, Ashley Swiger, uses light to impress the emotion of the moment. Sudden bright light insults our senses; dim soothing lights and pitch blackness are utilized to emote the situation. Noteworthy is the stage manager, Liz Rankin who manages to keep everyone safe and quiet coming on and off a stage in oftentimes complete darkness. Costume designer, Renee Vergauwen and Mary Ruth Cowgill, created peasant costumes for the women, for the tempters, business and aristocratic attire, and proper Century Christian garb for our monastic actors to bring us back in time.

The play is performed in about 70 minutes, without intermission, without time to pause, think and relax. It is a drama that brings raw feelings to the surface, complex questions to mind. It is not a play that children under 12 will necessarily enjoy or understand; it is a production that the glib theatergoer probably will want to avoid. It is however an absolute must see show for those with faith and interest in the moral choices that average people make. Those who question how life in this world will translate to their spirituality will gloriously appreciate this production. I was exhausted and confused from the experience. I am not the only one perplexed, as after each production, there is a post-production discussion. (It was for future performances and did not occur at the production I attended.) I remain mystified, but like all members of any audience of this production, I am invited to attend all future discussions. Parking in the 3 area lots is plentiful, however you may want to call ahead if you need handicapped parking or have any special needs that may need accommodations in this theater.

Advisory: Inappropriate for children under 12, children 12+ depending on maturity.