Theatre Review: ‘Nice Work If You Can Get It’ at Warner Theatre 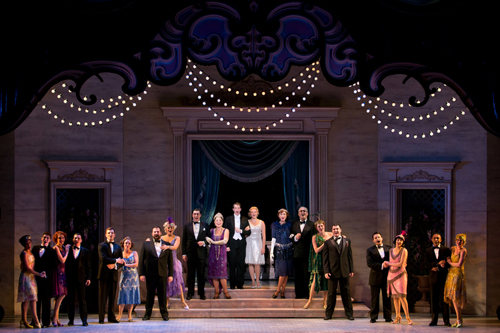 The touring cast of ‘Nice Work If You Can Get It.’ Photo by Jeremy Daniels.

Nice Work If You Can Get It is a throwback to all those bubbly musical comedies that provided escapism during the Depression/prohibition era. The inspiration for Joe DiPietro’s book takes a huge bow to the work of two celebrated British playwrights of the day, Guy Bolton and P.G. Wodehouse. Nice Work is chock full of can’t miss, classic songs from the brilliant George and Ira Gershwin songbook and high-spirited choreography that buoy the comic love story. All these elements come together to create the delightful production that hit Warner Theatre in DC all to briefly this past weekend. Director and choreographer David Eggers assisted Kathleen Marshall on the original Broadway production and does a beautiful job recreating the magic on the tour. The music is performed live with small but great seven-piece band, lead by musical director Charlie Reuter.

‘Nice Work’ is a completely satisfying evening of musical theater for all ages.

The show was a Tony-nominated Broadway hit in 2012 with heavy-hitters Matthew Broderick and Kelli O’Hara but the young actors in this touring company may be even more appealing. Alex Enterline is simply charming as rich playboy Jimmy Winter who meets his love match in Mariah MacFarlane’s spunky bootlegger Billie Bendix. The two have perfect chemistry made even more potent with strong vocals and comic timing and a believable tenderness in the more emotional moments. “Will You Remember Me” is a heartbreaker. It is the outrageous twists and turns that finally get Billie and Jimmy together – and also create some other unexpected couplings – that make for a wonderful journey.

A very drunk Jimmy first meets Billie on the docks after escaping a raid on the speakeasy where he was celebrating his forthcoming nuptials to an acceptable girl. This time it is the daughter of Senator Evergreen (Benjamin Perez). Billie and her two partners, Cookie and Duke, need a place to hide 400 cases of illegal gin. When she discovers Jimmy has a Long Island beach house he never uses, the plan is hatched.

After the gin has been safely stashed in the basement of the Long Island mansion, Jimmy arrives expectantly with his self-absorbed new wife, Eileen, who won’t let him touch her. She is played with comic brilliance by Rachael Scarr who steals nearly every scene she is in. A highlight is “Delishious” when Eillen is singing her own praises while preening in a bubble bath which literally erupts with dancers into a full blow production number.

The rest of the supporting cast is also sheer joy to watch. Reed Campbell as Cookie, who finds himself in the role of Jimmy’s new butler, is hysterical. Stephanie Harter Gilmore (with more of an operatic voice that isn’t always the best fit singing the standards) shines as the Duchess Estonia Dulworth, a staunch prohibitionist and the sister of Senator Evergreen. When Cookie puts alcohol in her lemonade in the second act, the results are hilarious.

Another budding romance involves Duke, a big, sweet, dumb lug who finds love with an equally dim chorus girl, Jeannie. To help his friend, Cookie tells her he is the Duke of England. Aaron Fried and Stephanie Gandolfo are so funny and endearing, especially when Duke tries to express his love in “Blah, Blah, Blah.”

The set designed by Shoko Kambara is not as elaborate as that of Broadway production due to the short stays in each city and was slightly awkward in confines of the Warner stage. But the performers shined even as some of the action took place in front of the curtain to allow for set changes.

Appropriately, the political references skewering both parties and the Senate got a spirited reaction with this DC audience. Ultimately they gave this hard-working cast and ensemble a well-deserved standing ovation at the final bow. Nice Work is a completely satisfying evening of musical theater for all ages. Look for it in a city near you!

Running Time: Approximately 2 hours and 30 minutes with one 15-minute intermission.

Nice Work If You Can Get It played at Warner Theatre, 513 13 Street, NW, Washington, DC on January 30 and 31, 2015. Click here for Nice Work On Tour dates through March 22. More information on upcoming events at Warner can be found online.