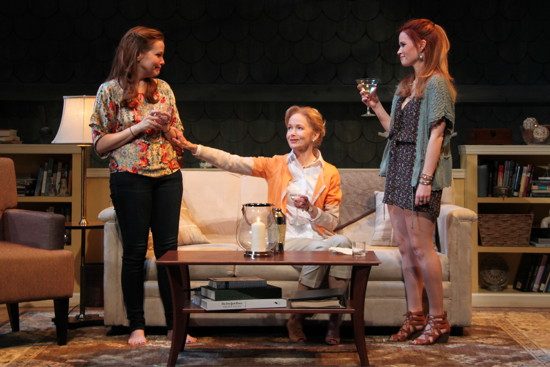 Gina Gionfriddo’s dramedy about five flawed characters struggling with ideas of feminism and anti-feminism (and lots of liquor) as well as their own personal and interpersonal conflicts has a lot more going for it than a catchy title.

Despite being occasionally talky and a little overly long, Rapture, Blister, Burn packs a wallop. It draws laughs, frustration (on behalf of the befuddled characters), sadness, and insights. Among them are the tongue-in-cheek, “Your life begins when your mother dies” and “Burglary is still burglary if you leave your door unlocked”—a reference to how justifiable it is to steal a man another woman seems eager to give up.

Shirley Serotsky has assembled a top-flight cast and elicited naturalistic performances that are full of humor and pathos.

One line in the play kind of says it all: “You start thinking about the life not lived.” In other words, is the grass always greener, and would we really want to climb to the other side of the fence?

Besides delving into sexual politics, Rapture, Blister, Burn is a variation on the common literary theme of twins who get switched. Only, in this case, the switch is voluntary, and the two making the switch are only metaphorically twins.

Gwen (Beth Hylton), a stay-at-home mom in a marriage that’s yes, flawed, and Catherine (Michelle Six), an academic who never married and is childless, have been close friends for years. Each covets the life of the other. When the two women decide to take the jealousy one step further and assume the actual life of the other — which also includes Catherine returning to her former boyfriend, who happens to be Gwen’s husband–the consequences aren’t quite what you might expect.

The responsiveness of the audience at the February 2nd performance was palpable. Not only did many of them give the production a standing ovation, but also you could hear frequent murmurs of agreement as well as robust laughter.

Of course, the play is not strictly speaking about feminism versus anti-feminism in a philosophical sense, though it is that too. The playwright asks the female characters, at least, as Ryan Rilette, producing artistic director of the Round House Theatre, points out, to make difficult life decisions in the context of a class on feminism.

The fact that the class has only two students—in addition to the mother of the professor, who walks in and out offering commentary—enhances what happens there.

Actually, though, I believe the play’s strongest scenes take place outside the living-room classroom, between Gwen and her husband, Don (Tim Getman), Don and Catherine, and the final scene between Catherine, her mother, and Avery.

Though Rapture, Blister, Burn sees its plots and characters through the lens of feminist theory, the truth is—and what makes the play especially strong—is that its real focus is on the conflicts of the characters and on troubled male-female relationships and supportive female friendships apart from theory. It asks the age-old question going back to the cavemen—who are frequently referenced: Does a woman have to give a man what he wants, or not, to win him?

Shirley Serotsky has assembled a top-flight cast and elicited naturalistic performances that are full of humor and pathos.

Michelle Six is appealing as the intelligent, passionate Catherine, who struggles to uncover the reason she hasn’t found lasting romantic love although she does have the capacity to love her work, family, and friends.

Beth Hylton effectively conveys the growing hysteria of a woman driven by jealousy and a domineering nature but blessed with less self-understanding even than Catherine’s.

As the sole male character, Getman faces the greatest challenge. You may want to dislike a man who bounces back and forth between two women without grasping the damage he inflicts, but the actor manages to make him sympathetic.

As Avery, the immodestly dressed baby-sitter turned student with a sharp tongue, Maggie Erwin nearly steals the show. At first ditzy, later wise, she approaches feminism from the pure vantage point of no prior knowledge.

In contrast, Helen Hedman brings a pre-feminism perspective to the mix. The martini-serving (any time of day) mother of Catherine is sarcastic but caring toward her daughter. What’s more, she understands her.

Scenic designer Daniel Conway has created the efficient two-part set—of the backyard of the Harper home and the living room of Catherine’s.

Debra Kim Sivigny is the costume designer, and Andrew Cissna is the lighting designer. Matthew M. Nielson is composer/sound designer, and Kasey Hendricks is the props master.

Advisory: There is a fair amount of language. Probably for audiences 16 and over.