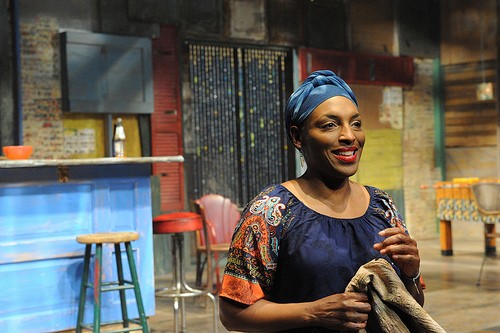 Throughout its history, theater has not only entertained but has been used to put a spotlight on injustice and spark change. Lynn Nottage’s powerful 2009 drama, Ruined, won a Pulitzer Prize as well as a Drama Desk and Outer Circle award and is making its Baltimore debut at the Everyman. This is a return to the work of the heralded playwright and the mighty actress, Dawn Ursula. Resident company member Ursula received rave reviews for her performance in last season’s highly acclaimed production of Nottage’s By the Way, Meet Vera Stark.

Though Nottage was inspired by Bertolt Brecht’s anti-war play Mother Courage and Her Children, this drama is based on real accounts of the women she interviewed during several trips to the war-scarred Democratic Republic of Congo. What she discovered was the utter brutality of sexual and physical abuse suffered by these women at the hands of both sides and urgency to let the world know. Unfortunately, it continues to this day as a result of an ongoing battle for control over the Congo’s rich mineral resources. It is a sobering fact that one of those minerals, coltan, is a crucial element in the manufacturing of all those electronic devices we take for granted – mobile phones, tablets and laptops.

…this is an important story that needs to be told. Everyman’s production does justice to the material and the courage of all women caught in conflicts around the world.

Not only do the women suffer the indignity and pain of abuse from the soldiers, they are cast out by their communities and families. As we learn from two women who are brought to work at Mama Nadi’s brothel, the horrors against them are viewed as their own fault – sadly not uncommon for many women all over the globe. Monique Ingram as Salima gives a brilliant and uncomfortable account of her experience.

Christian (Jason B. McIntosh in a beautiful performance) is the only decent and kind male figure in the play. A teddy bear of a man, he is a salesman who provides Mama Nadi (Dawn Ursula) with supplies for her business. He brings Salima and Sophie (a touching Zurin Villanueva) to her, ironically, for safe haven. Sophie, who is much more beautiful than the plain Salima, was so mistreated that she is in constant physical pain. She is “ruined”– damaged goods – and it takes a rare box of Belgian chocolates for Mama Nadi to take her in. Sophie is bit more protected than the other girls from dealing with the soldiers. She is educated and starts keeping the accounts and singing in the bar. These songs, while sung beautifully, are difficult to understand, as is some of the dialogue. The accents, a mix of African and French (the official language of the Congo), are at times too thick.

The only other non-soldier is a white man, Harari (Bruce Randolph Nelson) an unscrupulous dealer in conflict diamonds and other precious minerals. He visits Mama Nadi’s to see his favorite girl, Josephine (a marvelous Jade Wheeler) who has been with Mama Nadi for a while and has formed a tougher skin. Harari feeds her with false promises that he will take her away and put her in an apartment in the city. The other men are the soldiers from both sides of the conflict and include a particularly brutal leader and bully, Osembenga (Manu Kumasi). Fortune (Bueka Uwemedimo) is Salima’s husband who initially chased her out of the village when she returned from her ordeal. He is now a soldier in search of Salima, realizing he still loves her. He eventually tips the scales of the delicate balance Mama Nadi has managed to create and sets off the violence bubbling beneath the surface.

The ensemble of soldiers is like a coiled snake and does a great job, as dread seems to fill the theater whenever they appear. You never know if Mama Nadi will be able to continue to cajole, flirt or bargain her way out of the inevitable and potentially dangerous situations that arise in the bar. It has to be said that all of the performances deserve high praise.

At the heart of Ruined is Dawn Ursuala’s magnetic performance as Mama Nadi. She is a force of nature but not altogether likable. Her character is neither a saint nor savior but a survivor and businesswoman in a world ruled by brutal men. Like the saloons of the old American West, the soldiers must give up their bullets when they come into her saloon. This is her domain and she is funny and fierce, tough as nails – a wheeler-dealer who appears to takes no sides. She only wants to take their money. Any kind of warmth would be letting her guard down but the cracks do appear. Mama Nadi has her own story.

It’s hard to believe that any kind of joy could be found in this situation. However Nottage’s script – with expert direction from internationally acclaimed director, Tazewell Thompson in his Everyman debut – balances the brutality with hope and humor that honors the resilience and strength of these women. A surprisingly tender and satisfying ending brought the audience to its feet.

The production team, as always, does an incredible job bringing the setting to life. Scenic designer Brandon McNeel has created a colorful and visually engaging set constructed from old doors, discarded tin, and mismatched chairs and tables while David Burdick costumes reflect a complementary mix of soldier fatigues, modern dress and the bright colors and vibrant patterns of African fabrics. Both lighting design by Stephen Quandt and sound design by Fabian Obispo give a great impact to the plot.

This is not a play for everyone. It can be very difficult to watch but this is an important story that needs to be told. Everyman’s production does justice to the material and the courage of all women caught in conflicts around the world.

Running Time: Approximately 2 hours and 30 minutes, including one 15-minute intermission.