Theatre Review: ‘Turn of the Screw’ at Creative Cauldron 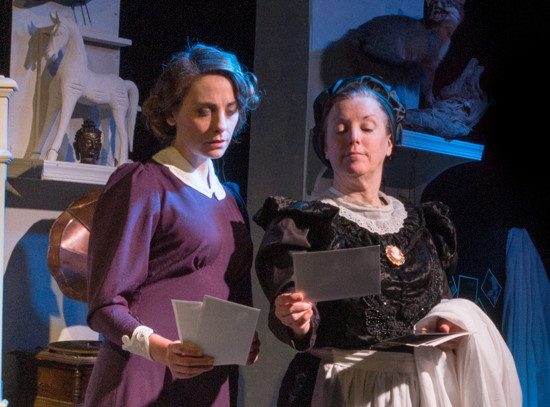 At last there is a musical for those who enjoy horror movies. Creative Cauldron in Falls Church has premiered an original musical which may be in a genre all its own. Based on Henry James’s novel of the same name, Turn of the Screw is a gothic romance about a governess in an old mansion that begins to uncover terrible secrets about the house’s past. Tantalizingly suspenseful.

Two local veteran writers, Matt Conner and Stephen Gregory Smith wrote the score and libretto respectively. With one prior collaboration, Night of the Living Dead The Musical, between them and several other works individually, both Conner and Smith have proved themselves adept at producing and staging inventive, original works in various venues.

…a powerful and moving piece.

Musically the show feels like a cross between Secret Garden and Next to Normal; it is sweet and mournful with a modern twist. The solo ballads are the best numbers, with “Moment” and “Make Believe” leading the pack. It stumbles occasionally in group numbers and up-tempo pieces, with “Fast and Loose” “The Interview” feeling particularly jarring against the others. There is also an element of cheesiness in the music, which is often quite endearing – particularly when the child actors are singing. However sometimes, as in the two pieces mentioned, the cheese factor becomes overwhelming. But the strength of the music is in its playfulness, and the majority of the numbers excel at making the audience smile.

The book, though based on an existing work, does an excellent job at keeping the audience in suspense. Like all good horror stories it teases the viewers with tidbits of information. And like James himself, Smith has refrained from giving a conclusive answer even at the very end. It instead leaves the viewers to wonder just what went on at Bly House. Reminiscent of the long-running play The Woman in Black, the show focuses less on startling appearances and sudden noises, and more on the idea that the past may not always stay buried.

Leading the cast in the role of Miss Giddens is Susan Derry. A two-time Helen Hayes nominee, Derry has a beautiful voice with a seemingly endless range. She performs marvelously as the inexperienced governess trying to help her young pupils and understand the mysteries of their pasts. Even when she is not the focal point of the action onstage, it is hard not to watch her, as even in the background she gives a remarkable effort.

It must be said that Sherri L. Edelen as the housekeeper Mrs. Grose is the highlight of the show. Unsurprisingly, with two Helen Hayes awards under her belt, Edelen is a powerhouse performer. With a rich voice and a great deal of emotional depth in her performance, Edelen delivers two of the best numbers in the show, “Black and White” and “Moment.”

One of the two child actors in the show, Ethan Miller as Miles, was highly impressive. Though young, he tackled quite an intense role and handled it admirably. An experienced singer, Miller’s two solo songs were some of the best in the show. His future promises excellent things to come.

If this production hits any snags, it is staging. Creative Cauldron has included the show in their series of plays performed in small spaces. And while the creative team has made excellent use of the limited space, some of the blocking choices seem to detract from the subject matter. There are also several instances of pantomime, as well as a slow-motion fight, which are a bit awkward in the small space. Given a larger space, or time to tweak some of these small issues, this show could really be a powerful and moving piece.