Theatre Review: ‘Wiley and the Hairy Man’ at Imagination Stage 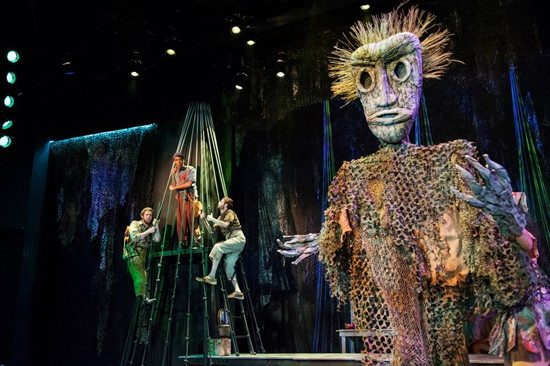 Wiley and the Hairy Man turns Imagination Stage into a hand-clapping, foot-stopping trip to a musical and mystical swamp. Directed by Kathryn Chase Bryer and written by Suzan Zeder, Wiley and the Hairy Man is adapted from a traditional African-American children’s story about a young boy who must overcome his fear of a tricky “hairy man” who lives in the dark shadows of the swamp.

Everyday, Wiley is sent deep into the swamp to cut wood for the fire by his mother, the best magic conjurer in the East. Wiley, however, hides from his mother because of his fear and his believed inability to make magic of his own to chase away the Hairy Man. The only thing Wiley thinks will keep him safe is his hound dog, because “everyone knows that” the Hairy Man is terrified of dogs. (The five-actor musical chorus announces this every chance they get. So when Wiley goes into the woods to fetch firewood with his dog, he thinks he is safe from Hairy Man.

Not only does this show contain a great message, the actors, the music, the set, the costumes and the puppetry are all amazing!

Wiley quickly learns that the Hairy Man is a master trickster when he easily lures Wiley’s dog away with a bone tied to a string. Alone in the swamp, Wiley realizes that he needs to out-trick the trickster three times to get him to go away, and he needs to do it all by himself. With each clever hoax Wiley pulls off, his confidence grows, and he sings a bit louder and walks a bit taller. I’m not going to give away the ending, but I will say that this play is a great lesson in teamwork, believing in yourself and loyalty.

Not only does this show contain a great message, the actors, the music, the set, the costumes and the puppetry are all amazing! The stage, designed by Samina Vieth, is covered with ropes, leaves and fabric that drape like Spanish moss. Wooden planks are put together to form the frame of Wiley’s house and a dock that extends over the swamp water right outside their front door. The lighting designer (Cory Ryan Frank) and the sound designer (Christopher Baine) work together to enhance Wiley’s world, and costume designer Katie Touart uses the colors and textures of the swamp to brilliantly reinforce the look of this imaginative story.

Theresa Cunningham plays Wiley’s mom and fills the stage with her presence. Her voice easily rings out when singing about her magic and her young son. Rafael Sebastian as Wiley’s dog has an abundance of energy. Ian Anthony Coleman as Wiley is sweet, and watching him grow into a brave young man is charming. Vaughn Irving is a member of the chorus and also the voice and puppet master of the Hairy Man, which is a large-headed Hairy Man puppet controlled by Irving using a large pole attached to the head and big, hanging hands that are slipped on like gloves. Irving disappears completely as he manipulates the the Hairy Man puppet with fluid movements.

The rest of the cast makes up the chorus, Kevin Collins, Shanta Parasuraman and Matthew Schleigh. This chorus, however, doesn’t remain static and in the shadows; they are wonderfully resourceful, and they each play at least two different instruments (like a washboard, spoons, violin, banjo, standup bass and guitar) that supplies the all the twangy, Hillbilly-type musical accompaniment throughout the show (music by Harry Pickens). The chorus also becomes a fire for momma’s conjuring pot, a large snake, an extra-gummy gum tree and many other objects that fill Wiley’s world.

Imagination Stage does a fantastic job of bringing a story written 40 years ago to life, and “everybody knows that” you shouldn’t miss this show.