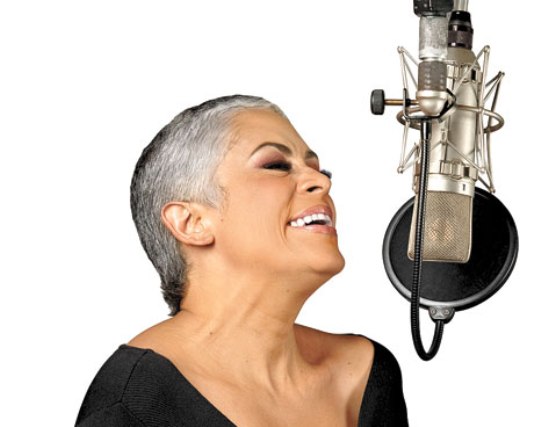 Spanish singer Eugenia León has been performing in the international music scene since the 1970’s and it’s easy to see why audiences keep coming back to hear her powerful sound.

León turned every song she touched into vocal gold.

This past week León graced the stage of Kennedy Center’s Eisenhower Theatre with a program called Voces De Mujeres, Voces Del Pueblo which translated means Women’s Voices , Voices of the People. Featuring songs made famous by such international female artists as Dalida, Milva  and Nina Simone, León turned every song she touched into vocal gold. A few standouts included “La Paloma”, “Barco Negro”, “Feeling Good” and an anthem for peace called “Helwa Ya Baladi.”These songs and the rest of León’s program show the passion that she has for her material. Some singers hit the stage and do something that is known as park and bark which means stand and sing with no emotion. While León doesn’t move around a whole lot, she makes up for it in sheer vocal power, which in turn, gives the audience that connection that should always be present.

León was backed by a superb seven piece band under the direction of  Rosino Serrano García. The band was totally in sync with León from beginning to end and guitarist Gilbert Pinzon Rivero was a stand out with a few featured guitar solos.

In any concert the music should be front and center so someone probably needs to rethink the choice of using every lighting trick in the book to supposedly enhance León’s performance. Yes, technology has taken theatrical and concert lighting to new heights but the choice of random color changes and moving lights snapping into position just took you out of whatever song was being performed. Also if you are going to use projection and light the show the way you did, then please make sure your projectors are bright enough. If you can’t see the images, there is no point in using them.

If you strip away the bells and whistles that dwarfed Eugenia León’s concert, the result was a singer with a voice that is heavenly and strong. I would like to see León in a smaller setting to get the full effect next time.